The Dodge Ram, or just Ram as it’s now called, was all-new in 2009. Since then Chrysler has pulled itself out of a financial hole and the newly minted Ram brand has steadily built a strong following, particularly in Canada. Now, four years in, the 2013 Ram is getting a mid-cycle refresh – one that may very well redefine that term. Why? Well, on first blush you’ll note the photos offer a bit of grille work and new sheet metal bends. This and a few interior tweaks (and maybe a few new paint colours) are the norm for most refreshes. But this Ram is doing so much more and frankly it’s what’s under the skin that has the truck world buzzing. 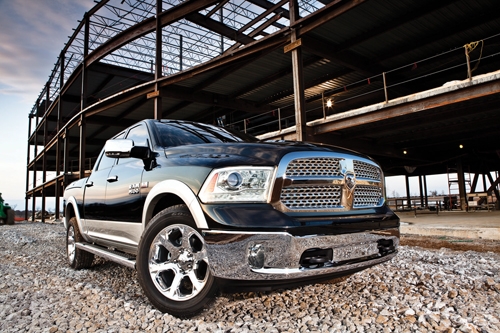 A new V6 engine and revolutionary eight-speed transmission is at its heart; and whether Ram says so or not, everything you’re about to read about here is on account of one word: EcoBoost.

The competing V6 engine in the Ford F-150 has been a huge sales success – one that has necessitated this radical upgrade to Ram (a truck that has long built its reputation on the V8 Hemi engine alone). And they’ve done it – yes, mechanically this 2013 Ram is anything but mid-cycle eye candy; it’s virtually a new truck.

Having heard the rumours of what Ram was up to I wrangled an invite to a very small, exclusive technical background briefing in Dallas, Texas. Spending hours with the engineers revealed a truck that boasts more than a dozen significant changes, all aimed at reducing fuel consumption, while preserving the soul of this very popular pickup truck.

So the engine in this new Ram is the 3.6L Pentastar V6, which has been upgraded to make 305 horsepower and 269 pound-feet of torque. It’s coupled to this all-new eight-speed transmission (developed by ZF of Germany); and, while the power and fuel savings implications of this combination will be obvious to most readers, it’s the sum total of all the technical changes that has brand president and CEO Fred Diaz confident enough to flatly say his Ram will beat Ford’s EcoBoost.

Let’s look at what this engineering team has managed to do for the Ram. It starts with this eight-speed automatic transmission – definitely a first for pickups. Couple that to Chrysler’s Pentastar V6 for a 20 percent savings in fuel over the current Hemi powertrain. It also weighs 35 kilograms less than the V8. But the Hemi is not going away, it continues to be available and some six months after the Pentastar/eight-speed arrives late this year the Hemi too will get hooked up to the ZF for at least a 20 percent fuel savings.

Stop/start technology has been added to the truck. A proven system that has been used sparingly by various brands, this system stops the engine at lights and restarts it as soon as the foot is lifted off the brake. This addition alone increases fuel efficiency by up to 3.3 percent, says Ram.

Active air shutters is another first on a pickup truck. Shutters are currently found on a few high-mile vehicles like the Chevy Cruise Eco. These vents open and close as needed for cooling; however, they also increase aerodynamics and fuel efficiency by around 0.5 percent. Engine warm-up time is also shortened.

A new electric power steering system adds five horsepower to the Pentastar output total while reducing fuel consumption by 1.8 percent. This is also a proven system – eliminating the constant power draw of a hydraulic pump as well as offering new steering effort calibrations matched to speed and road conditions, which in turn reduce driver fatigue.
VVT (variable value timing), another not-new idea added to the V6 (and the Hemi V8), saves fuel. Pulse-width modulation. This is one I hadn’t heard of. Seems that alternators produce way more power than is needed by most of a truck’s electrically run components, so this system reduces that parasitic electrical draw by the fuel system and cooling fan. This, in turn, reduces fuel consumption (by 0.4 percent) and increases component durability.

Even though this is a mid-cycle upgrade, the team couldn’t help redesigning parts of the frame. By using high-strength steel they reduced overall weight by 14 kilograms.

A fuel saver often overlooked is tires. To that end Ram is now kitted out with new low rolling resistance tires, standard. The front air dam has been lengthened to also increase aerodynamics, adding a 0.6 percent improvement to Ram fuel economy. The material is a rubberized polymer, which the guys assure me will take a beating and hold its shape.

The weirdest result comes by adding a new wheel-to-wheel side step; this was found to be aerodynamically more efficient delivering an added 0.5 percent fuel consumption improvement. It also offered a bonus – the longer step now provides a foothold for reaching into the front of the box.

The one thing missing from all the information I gathered in Texas is the new payload and towing figures. I asked and they wouldn’t say; however, Chrysler does confirm two things; first, they will use the new SAE towing standards to determine the weights, and second, by the time the “first drive” program comes around in August they’ll have the numbers. For my part, though, I feel confident in saying that with this Ram Pentastar/eight-speed taking on the Ford EcoBoost powertrain, Ram will have to match or exceed Ford – and Ford currently publishes a tow limit of 11,300 pounds for the EcoBoost equipped F-150.

For a mid-cycle refresh, this is a massive update, with fuel economy being the key target. However, there is more. For 2013, Ram has also added an air spring suspension. This system will automatically adjust to speed and load, while manually operated settings will be available for off-road operation and even a low-profile “park” mode. The truck will be able to lift and lower as much as four inches with the press of a button. With the new transmission also comes a new gear shifter – one that’s very different: a rotary dial on the dashboard. Also new is the availability of the Crew Cab with a longer six-foot, four-inch box. The 2013 Ram will arrive in dealer showrooms in the last quarter of 2012.