On-farm research networks provide an innovative opportunity for growers to conduct applied research to test products and practices on their farms. The Manitoba Pulse and Soybean Growers (MPSG) formed an on-farm research network in 2011 to address new challenges and help answer questions for growers. There were less than one million acres of soybeans at that time, but acreage keeps expanding with expectations of up to two million acres to be seeded in 2017. 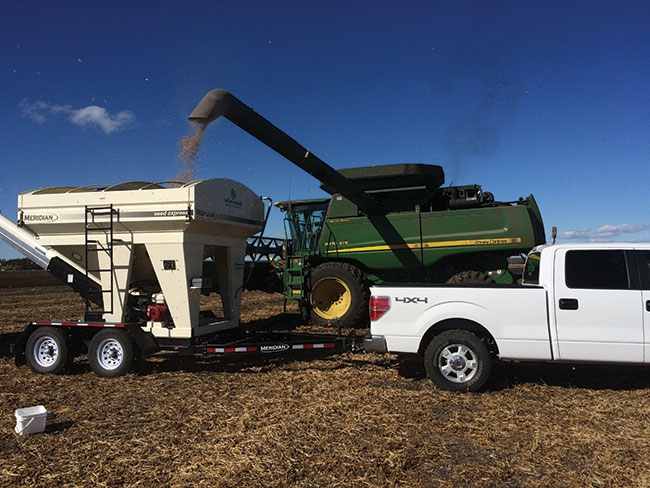 This on-farm research project uses weigh wagons at harvest to ensure the accuracy and reliability of the collected data. On-farm research networks provide an innovative opportunity

“The expansion of acreage and soybean growers has allowed for a lot of growth in the industry, along with raising a lot of new research questions,” says Kristen Podolsky MacMillan, former MPSG production specialist and now a research agronomist with the University of Manitoba. “With this growth, we have been able to invest in innovative research programs, the on-farm network being one of them. We looked to the Iowa On-Farm Network as a model when we started, working with agronomists and deploying on-farm research trials on soybean farms across Manitoba. We started with one project on 10 farms in 2011 and in 2016 expanded to almost 50 trials on the ground.”

This expansion in capacity for on-farm applied research along with the growing interest among farmers to use new technology, tools and their equipment to conduct research on their farms is driving the projects. “With the various tools and technology available, it is becoming simpler to deploy research on farms,” Podolsky MacMillan says. “Many of the research questions are focused around crop inputs, and farmers are interested in testing products at the same time that industry is interested in collaborating on the projects. We want to facilitate an environment where everyone in the network is using common protocols and methodology to collect high quality data that is pooled and shared with the entire industry.”

A unique aspect of the MPSG On-Farm Network is the on-farm partner component, where consultants or agronomists are in charge of working directly with each grower on a project. The on-farm partner is responsible for helping growers understand the project and protocols, assisting with setting up the replicated research plots and collecting data from each farmer in the project to ensure consistency. The growers are responsible for setting up the trial with their equipment on their farm and harvesting the plots using a weigh wagon.

“One of our key roles is to keep the on-farm research simple, comparing a grower’s normal practice with just one alternative,” Podolsky MacMillan says. “Focusing on crop inputs allows us to do that, so the research trials compare treated and untreated plots, or sprayed and unsprayed plots, replicated a few times across the production field. We want to work with growers to help answer questions on their farm that can improve efficiency and profitability and try to keep it easy and practical.”

The network follows three key principles: being participatory, precise and proactive. Farmers are involved and participate directly in the research process, learning about research methods and utilizing technology and equipment to answer questions they care about. The research is based on precise, scientific principles and uses standard measures like weigh wagons and statistical analysis to make sure the results are real and reliable. Finally, the network is proactive to ensure the research is relevant today and in the future.

Research projects are usually set up on 10 farms for three years on average, which will result in 30 site-years of data. For example, in 2013 one of the first on-farm research trials was set up on 10 farms focused on inoculants and the question of the benefit of double compared to single inoculation. The standard recommendation at the time was double inoculation, but long-time growers were wondering if they could reduce the amount of inoculant they were using.

“The results from the three years across several different environments showed that only two of 25 sites showed a significant response to double inoculant,” Podolsky MacMillan says. “Those results led to a strong conclusion and new recommendations for single inoculation in fields that have a good history of soybeans. A checklist for what defines a good history of soybeans was also developed. In 2016 a new three-year project was launched for those growers who have grown soybeans on the same piece of land at least three times, to look at single inoculant versus no inoculation and is being paired with a university research project. Alongside the on-farm trials, a university soil biologist will be collecting soil samples to measure the rhizobia in the field.”

This type of collaborative project supports the new role Podolsky MacMillan assumed in December 2016 as research agronomist with the University of Manitoba’s plant science department. In this role, she will be conducting small plot applied research and facilitating a greater connection between industry, the on-farm network growers and farm partners, and university/government research programs.

“This is a brand new position at the University of Manitoba that will not only establish new applied research but also disseminate current knowledge and keep up-to-date with grower questions and technology. Small plot research remains critical since it allows researchers to intensively compare numerous treatments at one time, usually in fewer locations, and can be complemented by the on-farm applied research projects, which test one treatment over several different farm operations and environments in a shorter time. We will be able to extend and share the results and transform them into new recommendations, extension tools, research projects and ultimately the probability of a return on investment for growers.”

Getting involved with on-farm research
The well-established MPSG On-Farm Research Network is continuing to expand its program, with Greg Bartley, the MPSG On-Farm Network specialist, taking over as program lead.

“We are encouraging growers to get involved with the on-farm research projects,” Bartley says. “Although it is a bit of a time commitment, growers should consider the benefits the research will bring back to their farm based on the recommendations and results. It’s a great way for growers to see what works on their farm in real-time using their own equipment.” MPSG will be looking for another 50 growers to participate in on-farm trials in the 2017 growing season. Growers must be equipped with GPS and yield monitors and agree to carefully record field management. At harvest, some extra time is required to harvest the different plots using a weigh wagon to ensure the accuracy and reliability of data collection.

For Bartley, the benefits of being involved with on-farm research outweigh the time commitment. “I encourage growers to embrace the benefits of on-farm research; don’t be scared of the process,” he says. “Finding answers to questions on your farm can help save money, time or improve yields.” An added benefit is the opportunity to share results and ideas with other growers, researchers and extension staff in the network. During the growing season, the network holds field days that include visits to some of the on-farm research sites. Farmers and agronomists get to look at the results in the field and use that information in planning for next year.

The innovative approach the MPSG took in developing its on-farm network is now being looked to as a model in other jurisdictions in Canada and elsewhere.

The MPSG is expanding its early connections with the Iowa network to include others in various regions. “There is definitely interest in Saskatchewan and Alberta, although every province and state seems to be taking a slightly different approach to their strategy,” Podolsky MacMillan says. “Each program is slightly unique, however, we are all connected and work together to share our successes and lessons learned.”