The perfect crop is every corn grower’s dream; but perfect, or bumper, crops don’t happen without planning, and a little luck.

Elite crop specialist François Labrie says, “If you do everything perfect, then 300 bushels per acre is possible. But life’s not perfect.” And, he adds, that’s the reason it’s important to get growers thinking about how to improve their yield as well as their profit.

He says the top three contributors to a high yield are good weather, adequate nitrogen (N) and a performance corn hybrid seed. These three factors directly affect 72 per cent of a crop’s yield. The remaining 28 per cent of the yield is determined by the previous crop, density of plant population, type of tillage used on a particular soil and the application of fungicides during the growing season.

Labrie’s advice is to work with the top three first. While he says we can’t control the weather, it is important to institute an adequate drainage system to manage extreme wet weather, and to take steps to improve water retention in dry weather. Together, these two measures will improve the likelihood of having optimum moisture levels, which contribute to 27 per cent of final yield.

N levels in the soil are the second most important influence on yield. Labrie says adequate N levels impact the final yield by 26 per cent. The presence of N is entirely controlled by the grower, and careful application of N will improve yield. Labrie suggests applying 180 pounds of N per acre in two stages: 45 pounds at seeding and 135 pounds at the four-leaf stage.

“The right amount of [N] at the right time will produce a higher yield,” he notes. “Watch for [N] deficiency in August and make application adjustments in the future if needed.”

Using the same hybrid year after year won’t improve yields either, according to Labrie. Corn breeders are continually developing new hybrids that out-produce many of the older varieties because they’re more resistant to disease, produce bigger cobs with more kernels and mature earlier to decrease the likelihood of frost damage. The initial cost is higher than many of the older varieties, but Labrie suggests growers do the math to see if improved yields are worth the additional cost.

So just how much time and effort should a grower put into a field to extract the highest yield? With N and seed being the two most important factors in crop yield, after weather, Elite set out to determine where a corn grower should concentrate their efforts.

In their own field trials, Elite measured changes in yields following adjustments to the number of kernels planted per acre, the amount of N added to the soil and the application of fungicide to the crop. They began by planting the same hybrid corn seed on three sites, each with a different soil type. They used an intensive management practice on one field, planting 38,000 kernels per acre and fertilizing with 215 pounds of N per acre but didn’t apply fungicide. The second field had the same planting and fertilization rates but a fungicide was added. A standard management practice was used on the third field with 32,000 kernels per acre, 155 pounds of N per acre and no fungicide applications.

The previous crops on the test sites were all cereals so there was no extra N left from soybeans.

The intensive management field with fungicide showed a yield of 235 bushels per acre or 13 per cent increase in yield and a $29.55 per acre increase in net profit over the standard management field. Labrie uses corn at $4.80 per bushel for the calculations. He notes fungicide is a good management tool for corn after other management problems like soil compaction or lack of N have been solved. “Fungicide has less impact on the bottom line and works best with a full season hybrid. It’s not the first management tool I’d use,” he says.

According to Labrie, the biggest risk with intensive management is competition between plants for light, water and nutrients. Late emerging plants are at a disadvantage and produce smaller and fewer, if any, cobs.

Labrie says before charging ahead and increasing the per acre plant population, growers must ensure they have a highly fertile soil with good water retention. He says if the soil is dry or sandy, “Don’t waste money on that because yields won’t improve.” Compaction is also a limiting factor as it inhibits root development and the plant won’t be able to pick up the available water and nutrients. Too many plants in the field will create increased pressure on the available water and nutrients causing uneven plant development.

The seed is bred so all the plants are the same; if they’re not all the same, then there’s something else wrong, he notes. 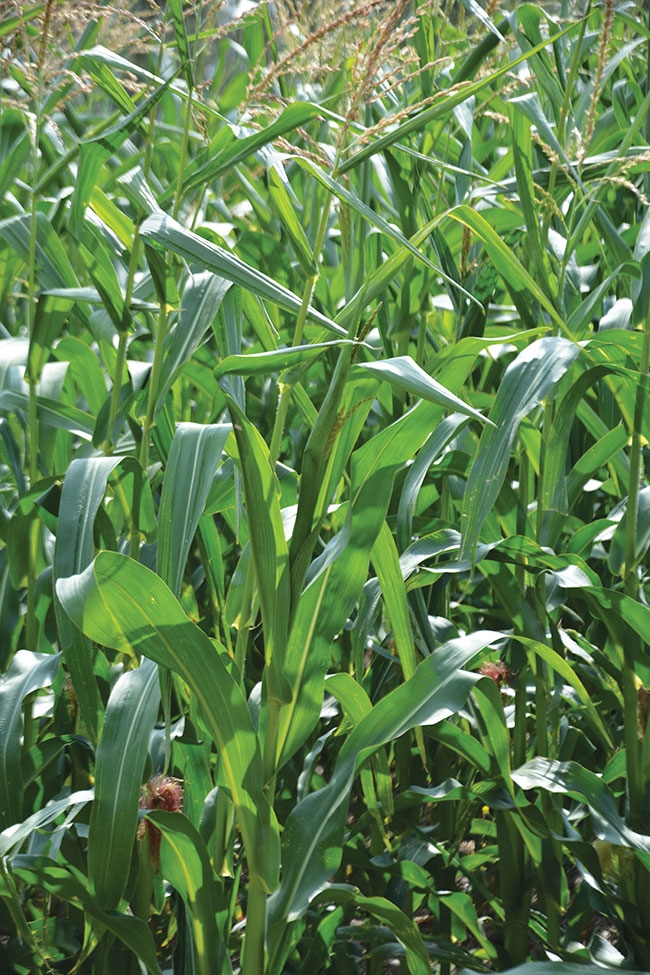 The top three contributors to high corn yields are good weather The perfect crop is every corn grower’s dream; but perfect