The Ultimate Canola Challenge (UCC) 3.0 ran in 2015 to further assess the effects of boron fertilizer on canola yield across the Prairies. Despite approximately 20 to 25 per cent of canola growers using boron (B) in their fertility program in canola, Murray Hartman, provincial oilseed specialist with Alberta Agriculture and Forestry (AAF) at
Lacombe says UCC and other research trials do not find a case for routinely applying boron on the Prairies.

“Going back to 2013 with the Ultimate Canola Challenge, there were some inconsistent results with boron, so instead of carrying on the challenge with all the treatments, we decided to focus on boron in 2015,” Hartman says. He reported on the UCC findings at the Alberta Agronomy Update in Red Deer, Alta., in January 2015.

The original UCC conducted by the Canola Council of Canada (CCC) ran in 2013 and 2014 and compared 12 different treatments against a best management practice (BMP) approach developed by Hartman and Neil Harker, research scientist with Agriculture and Agri-Food Canada (AAFC), both at Lacombe, Alta. The products tested in those years were picked by Hartman, Harker and CCC agronomists, based on the number of inquiries they received about the products and their own personal interest, and included extra nitrogen (N) fertilizer at seeding or in-crop, seed primers, biostimulant, boron, foliar stress relievers and CO2 fertilizer.

The UCC research in 2013-14 was conducted successfully at nine sites in Alberta and three sites in Saskatchewan; there were a few sites that were rejected due to weather or other issues.

The results from the original UCC found that of 13 products and practices tested, only one provided a significant response compared to the BMP check. Applying N at 75 per cent of the recommended rate resulted in a significantly lower yield.

Assessing 2015 UCC
Hartman says given the lack of response to the treatments in the original UCC, the team didn’t feel it was worthwhile to carry the same trials forward in 2015. Rather, because significant acres continue to be treated with boron, they decided to focus the UCC in 2015 on boron in both small plots and farmer field trials.

Small plot trials were conducted at AAFC Beaverlodge and Lacombe (trial lost to hail), Alta., Portage la Prairie, Man. and Scott, Sask. Large field strip trials were conducted at Innisfail and Penhold, Alta., Medstead, Nipawin and Fairlight, Sask., and Rapid City, Man. Treatments for small plots included no boron check, Boron (Nexus) at five per cent flowering at 1 L/ac, MicroBolt B (Alpine) at the four to six leaf stage at 0.75 L/ac, SuperB (Omex) at five per cent flowering at a rate of 1.0 L/ac, and Boron (Nexus) with fungicide at 30 per cent bloom at 1.0 L/ac. Large plots compared the producer’s choice of foliar boron to a check, except for the Medstead site, which involved a soil-applied boron treatment. Large field strip replications ranged from one to five.

“In the 2015 small plots, we found no statistical yield difference from the check treatment at any site or overall,” Hartman notes.

Similarly, in the large strip trials, overall there was no statistically significant difference. There was a slight trend towards higher yield at Rapid City (although not statistically different), but a significantly higher yield with boron at Nipawin where the crop was recovering from hail damage. The Nipawin site only had two replications and no measurements to confirm similar crop densities after the hail, and thus the results shouldn’t be viewed as conclusive.

Hartman went one step further and looked at other independent research conducted on the Prairies. He did a meta-analysis of these research projects and the UCC results to find out if there was a common conclusion regarding the benefits of using boron in canola. The trials included those conducted by fertility researchers Rigas Karamanos, Sukhdev Malhi, Fran Walley and Stephen Vajdik, and other trials from the CCC, AAF and the Battle River Research Group. The foliar and soil applied treatments were compared separately to the check when both were tested in one trial, so there were more comparisons than actual site years.

The analysis found that out of almost 100 comparisons from more than 60 site years, about one-half gave an arithmetic yield increase, while the other one-half had a yield loss. This illustrates a normal distribution with no significant treatment effect.

“On average, over all these comparisons, there wasn’t even a one per cent yield increase from boron,” Hartman says. “Based on all the research, as a general recommendation I would have to say it is a ‘big unlikely’ that you would get a statistical yield response. We didn’t even see a statistical response in 25 per cent of the trials, which I personally use to define an unlikely response. Statistically, there just was not a real, general response to boron.”

The argument could be made that perhaps there would be a more consistent response on soils typically thought to be most boron deficient – on sandy, acidic soils. However, Hartman says soil testing to determine boron fertility isn’t reliable. Published research by Karamanos et al showed poor correlation between the hot water extractable boron test and canola yield. Karamanos’ Canadian Journal of Plant Science article concluded “hot-water extractable B is not an effective diagnostic tool for determining the B status of western Canadian prairie soils.”

Overall, Hartman says the UCC trials did not support the routine use of boron in canola in Western Canada.

“I don’t really have anything else to say. This is what we found, and a response to boron is very unlikely for me,” Hartman concludes. 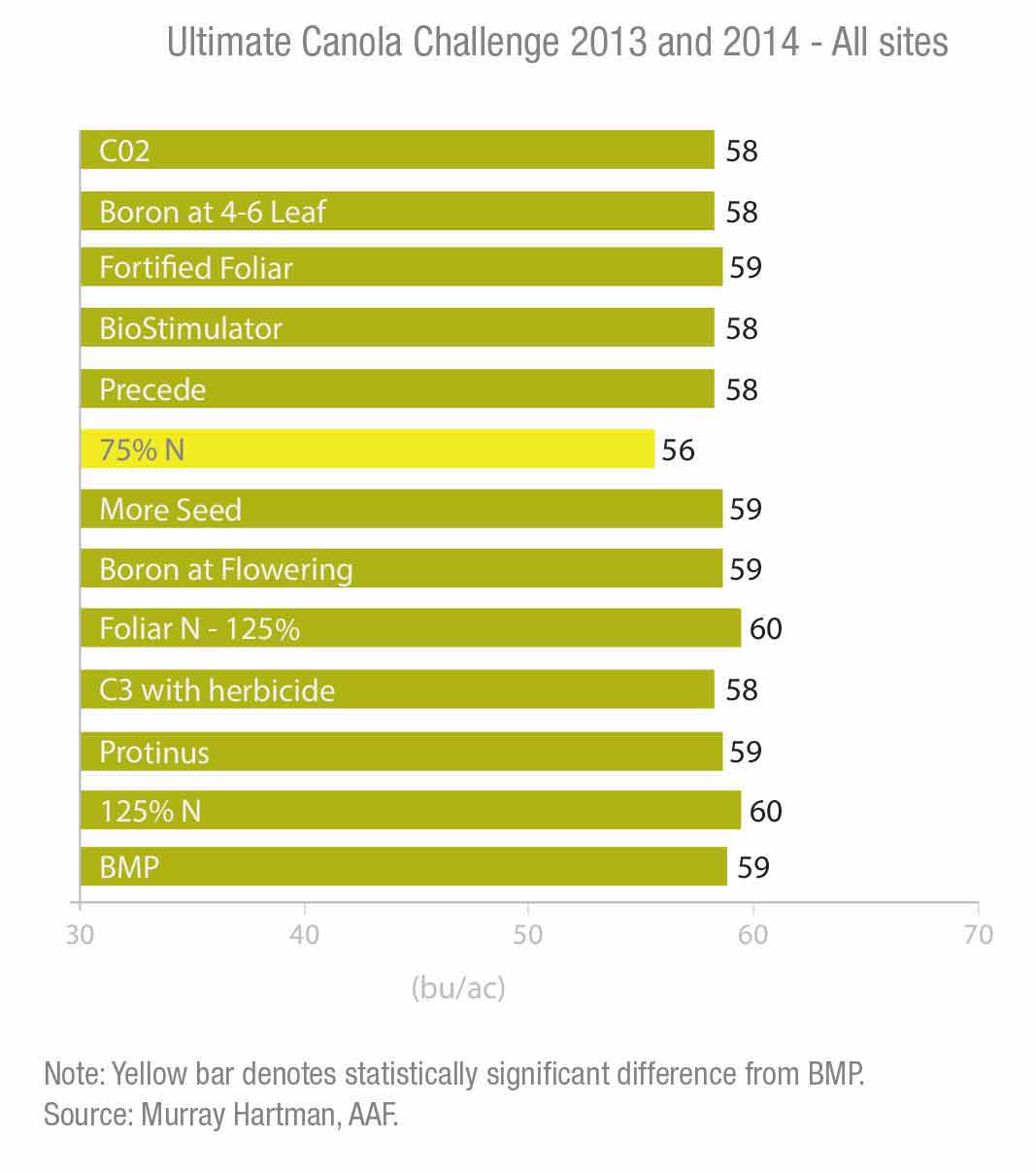