“Since the time of the study, the durum growing area affected by FHB is certainly increasing, and the area [in which] we can consistently produce high quality durum is shrinking,” Bill May, AAFC crop management agronomist at Indian Head, says. “When we did this study in mid 2000, the disease pressure at Indian Head was moderate. But today, with increasing disease pressure, the conditions between Indian Head and Melita locations are much more similar. Newer fungicide products available today provide better control as well.”

Researchers did not find any interactions among fungicide, seeding rate, N fertilizer and cultivar for all measured variables. Foliar fungicide treatments resulted in greater kernel weight, grain yield and test weight than the no-fungicide treatment.

“The results showed that an application of a foliar fungicide at anthesis was as beneficial for yield as at the flag leaf stage, especially when visible leaf spots did not develop in the middle and upper portion of the canopy as the flag leaf emerged,” May says. “Typically, leaf spot development is slow enough in durum. So unless there are obvious symptoms early, I would be much more worried about making a fungicide application for FHB at anthesis than a flag leaf application.”

The results also showed an application of foliar fungicides propiconazole, tebuconazole and propiconazole tebuconazole increased grain yield, but did not reduce Fusarium-damaged kernels (FDK). This indicates growers may see a yield increase more often than an improvement in quality when these fungicides are applied to durum wheat. Cultivar selection had the largest effect on FDK because of susceptibility differences, but not due to the fungicide application.

Small increases in grain yield of durum wheat were achieved by increasing seeding rate and N rate. Grain yield increased by 2.4 per cent when the seeding rate was increased from 150 to 300 plants/m2. “Using the recommended N fertilizer rate provided the best results and consistently improved grain quality,” May says. “Increasing N fertilizer rate from 75 per cent of recommended rate to full recommended rates (100 per cent) increased grain yield by 5.2 per cent, protein concentration by 5.4 per cent and hard vitreous kernels (HVK) by 2.6 per cent, but decreased test weight by 0.5 per cent. Using recommended fertilizer N rates and proper seeding rates impacts uniform crop development and maturity, which is important for improving conditions for both fungicide application and harvest.”

Overall, the study showed the effects of foliar fungicide application on durum wheat were independent of the seeding rates and N rates used in this study. “The seeding rate and N rate you use won’t make a fungicide application more or less effective,” May notes. “However, using good agronomic practices, including recommended seeding and N rates, are important for good durum production. In addition, unless growers are in an area that has not been infected by FHB and [it’s] a really dry year, then they should pencil in an application for FHB at anthesis. And as new varieties with improved Fusarium resistance become available, those will help improve both yield and quality for growers.”

Although all varieties currently have poor resistance to Fusarium, two newer varieties, Brigade and Transcend, are somewhat better at moderately susceptible. Both varieties also have fairly good leaf spot resistance. 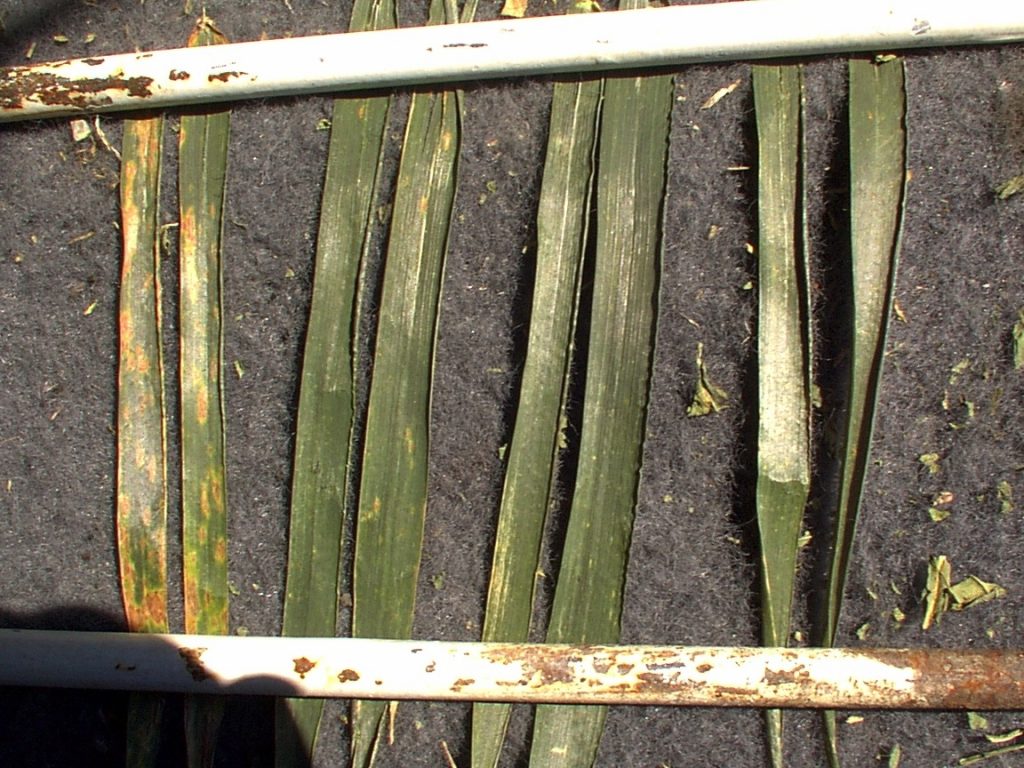 Comparison of leaf spotting levels with fungicide treatments from left to right: control Prairie areas affected by Fusarium head blight (FHB) and other diseases are increasing for durum wheat growers.