Improvements in nitrogen use efficiency, crop yield and quality. 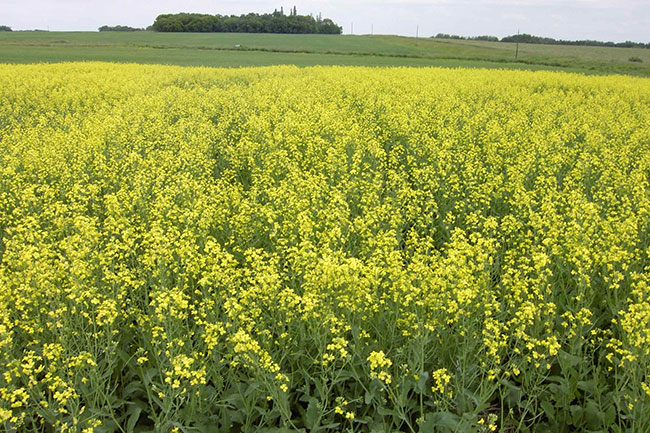 As a best practice, in-soil banding of nitrogen (N) fertilizer has long been recommended on the Prairies. Research has shown a number of benefits of in-soil banding, including reduced potential for N losses, improved nitrogen use efficiency (NUE), and also improvements in crop yield and quality. However, with growing farm sizes in Western Canada, there has been some movement back to broadcast application of N for various operational reasons.

“In Manitoba, in-soil banding close to or at the time of seeding is really considered the gold standard of N management,” says Ramona Mohr, research scientist with Agriculture and Agri-Food Canada (AAFC) at the Brandon Research Centre.

“Putting that N fertilizer into the soil through banding can help reduce volatilization losses, immobilization losses and denitrification, and can provide many other benefits. However, recently some farmers have moved back to broadcast application of N due to larger farm size and various operational reasons such as reducing the handling of fertilizer during the seeding operation. Broadcasting N may speed up spring seeding operations, and under wet conditions, not having to carry that fertilizer means farmers can probably get on to the field earlier.”

However, recently some farmers have moved back to broadcast application of N due to larger farm size and various operational reasons such as reducing the handling of fertilizer during the seeding operation.

However, surface application of N fertilizer can increase the potential for volatilization losses. This raises some questions about what that means for NUE of the crop and whether or not some of the enhanced efficiency products that are now available could be used to reduce that gap between the performance of in-soil banding compared to surface application.

To try to answer some of those questions, researchers initiated a four-year project with several components to gain more information about the effect of fertilizer placement and also the performance of different fertilizer products. The goal was to look at placement, fertilizer source and the effect on volatilization losses early in the growing season during the first month after seeding. The project also assessed the NUE of the crop, as well as crop yield and quality.

In one set of trials, small-plot field experiments were conducted in Brandon, Man., in 2017 to identify fertilizer management practices that reduce the potential for volatilization losses and improve fertilizer nitrogen use efficiency for canola. The objective of the study was to determine the effect of fertilizer source and placement on canola yield. The study also looked at nitrogen use efficiency by the canola crop and nitrogen volatilization losses on both calcareous and non-calcareous soils.

There can be a greater potential for volatilization losses on calcareous soils, so comparing the two soils under the same environment was important. The study compared fertilizer placement, looking at either in-soil banding or surface application of N. It also compared the performance of different fertilizer products, either conventional products including UAN and urea, or enhanced efficiency products with either nitrification inhibitors and/or urease inhibitors.

“We recently finalized the field work for this set of experiments and are still bringing other site years of data into the final analysis,” Mohr explains. “Our preliminary findings so far do indicate that in-soil banding of N consistently performed as well or better than surface applications. However, we still need to take a closer look at all of the data,” Mohr says.

Mohr notes that for growers, that means balancing operational requirements against N management practices. Although surface application may appear to improve overall efficiency, there are a lot of factors to consider.

Although surface application may appear to improve overall efficiency, there are a lot of factors to consider.

For individual farm and field conditions, understanding the likely ways that N might be lost is important, as well as evaluating what products or management practices can help reduce the risk of those pathways of N loss. Losses can be a function of both environmental conditions and individual management practices on the farm. Balancing the potential N losses of surface application against how important saving time is, along with draft requirements, fuel costs and equipment costs is key. The goal is to try to get the best balance for the overall operation of your farm.

“However, the final decision is not clear cut and growers have to very much look at their own situation and make a decision for what is best for their operation,” Mohr says. “It comes back to the question of NUE, crop yield and quality, N losses and then looking at all of the costs and benefits. Consideration for the many growing seasons and other factors that may influence N volatilization, fertilizer use efficiency and yield response also need to be addressed. As a general rule, approaches to N management practices will be similar for most of the field crops grown in Western Canada including canola and wheat, although there might be some differences with longer season crops such as corn or potatoes.”

Although the study findings are preliminary, Mohr points back to some previous research conducted by Cindy Grant, research scientist with AAFC, which included a review of several studies comparing in-soil banding and surface banding. The review suggested that in-soil banding is still the gold standard for NUE in Manitoba based on the research available. Although enhanced efficiency fertilizer didn’t fully make up for the gap between in-soil banding and surface application, if used properly those products may be able to narrow the difference.

“To date, our preliminary study findings reflect the previous research in Western Canada, which supports the use of in-soil banding of N fertilizers during seeding or near seeding as a best management practice to enhance nitrogen use efficiency in canola and other crop production systems.” Final study results will be available in the fall of 2019.