Stay on alert for invasive species in cropland and field grain. 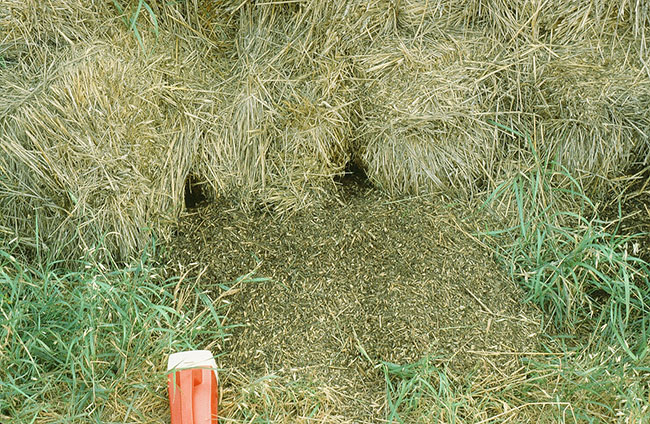 Norway rats can cause damage in feed bales. PhotoS courtesy of Phil Merrill.

When it comes to controlling invasive animal species threatening agriculture, Alberta’s Norway rat program is second to none.

Norway rats – commonly referred to as sewer rats – are non-native to Canada; they moved into the Americas from Europe along new trade routes in the 1700s. Champion “gnawers,” these pests live where humans live and can cause serious property damage. They are classified as invasive pests in Canada – a designation that means local and national governments work together to eradicate populations.

Norway rats were discovered at the province’s eastern border in 1949, and by 1950 the province had set up a control program, says Phil Merrill, Alberta Agriculture’s rat and pest specialist.

“The program has a pest control officer in every county who is automatically the pest control manager for rats. If we get a call from that county, that officer is responsible to check it out. Ninety-nine per cent of our calls are misidentified rodents, but we get a couple of calls per month for confirmed rats,” he says. The program occasionally runs public awareness campaigns and maintains a hotline (310-RATS) Albertans can use to report rat sightings or infestations.

Due in large part to this program, Alberta is virtually rat-free. There’s some rat pressure in a 30-kilometre stretch of the Saskatchewan-Alberta border, but Merrill says any infestations are typically controlled within the first six miles inside the Alberta border.

Why so much energy focused on one pest? According to Merrill, only this level of proactivity can prevent a small problem from becoming a large one.

Norway rats aren’t the only invasive animal pest threatening Western Canadian agriculture. Invasive pests can threaten both cropland and stored grain, and producers’ best weapon against them is awareness. 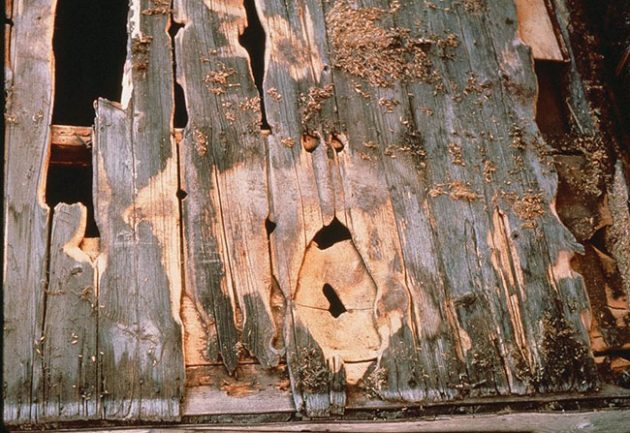 Norway rats can cause damage in wooden bins. Photos courtesy of Phil Merrill.

In Alberta, wild boar made national news in 2018. The animals are farmed in the province, but when they escape, turn feral and multiply, they are considered an invasive pest by the province, says Perry Abramenko, an inspector with Alberta Agriculture.

Wild boar can survive by eating any organic matter, and they can reproduce up to twice a year. They can cause extensive damage to stored grain and feed, cropland and waterways. When hunted, the wild boar threat actually worsens; hunted boar will scatter and infest new zones and become warier of human activity, Abramenko says, which can mean they become nocturnal.

A few years ago, Abramenko and his colleagues put together a working group that developed a pilot project for wild boar eradication and public education in the province.

The pilot relies on public co-operation – for example, the counties in question agreed to suspend the bounty during the pilot project. But public reportage of wild boar sightings is also crucial, so Abramenko’s team can build a map of affected areas.

“Up until we started the pilot we had no idea of the scope of the issue and we had very limited data on where there were issues with wild boar,” he says.

The pilot is testing different surveillance methods, including drone-mounted infrared cameras that can capture wild boar movement from their nests to cropland where they’re feeding. It’s also testing practical methods of eradicating whole “sounders,” or groups, such as baited corrals with remotely controlled gates.

In cropland, wild boar damage caused by rooting is visible during the growing season. “It will look like a rototiller has gone through,” Abramenko explains.

In cropland, wild boar damage caused by rooting is visible during the growing season. “It will look like a rototiller has gone through,” Abramenko explains.

It’s easier to look for signs of wild boar in the wintertime, when wild boar tracks layer in trails from nest to feeding site. 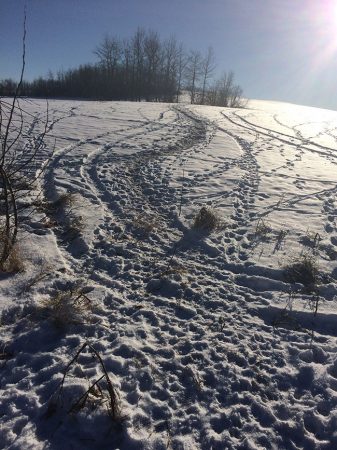 Wild boar sounders move along the same tracks, so their pathways become visible in the winter. Photos courtesy of Perry Abramenko

Abramenko says if they’re facing animal pest problems in the field, producers’ best bet is to report any damage to his team so they can help producers diagnose and deal with the problem.

“If a producer has damage from wild boar we’d like to work with them to resolve the problem. We’re not getting a lot of reports but that will hopefully improve as producers become more aware of the issue,” he says. 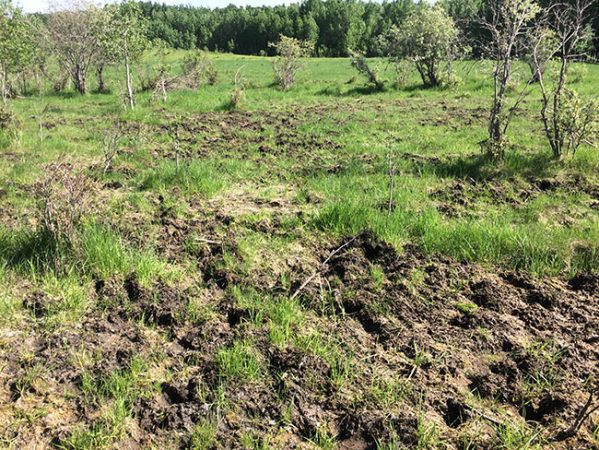 Cropland can be vulnerable to pests such as birds, deer and other wild animals, but it’s stored grain that attracts most invasive pests, says Blaine Timlick, program manager for infestation control and sanitation at the Canadian Grain Commission.

Most invasive pests of agriculture in Canada are actually insects, diseases and weeds, and this is where Timlick’s program concentrates. But Timlick says there are a few basic issues for producers to be aware of when it comes to protecting stored grain from all kinds of pests.

“The biggest issues are associated with temporary storage.”

“The biggest issues are associated with temporary storage,” Timlick says. “A lot of people are using grain bags, and that’s a good thing – about 22 years ago people were just leaving wheat piled on the ground, and deer were getting into it.”

When grain bags are filled properly, it’s harder for pests to penetrate the plastic, but Merrill says rodents can chew through the bags no matter how much care producers take.

If producers are using grain bags in the “risk zone” near the Saskatchewan border, Merrill strongly recommends they check all facilities and ensure they –and their neighbours – don’t have a rat problem. Old granaries with wooden floors are often hotspots for rat activity, but so are silage pits, feed lots and stored feed such as green feed bales.

“Grain bags are a real risk and concern to us. A grain bag doesn’t take long to penetrate and then they dig holes in the ground under the grain bags,” he says.

Timlick says that grain stored in grain bags does not give much of an odour to attract pests, and respiring grain can actually create a “modified atmosphere” that helps to kill insect pests trapped inside.

Hot temperatures prior to harvest can mean greater insect pressure, but the western Canadian climate can work in producers’ favour: if producers can get temperatures in stored grain below 15 C, insects can’t reproduce or feed.

“Grain is food and stored grain is an ecosystem unto itself, so if you leave it unmanaged and the temperatures start to aggregate, you’re going to get moisture, which allows fungal growth and starts to cause putrefaction of the grain, and then the insects come in as well as other animals that want to eat that grain,” he explains.

Merrill’s advice to producers using grain bags is to check them for signs of rodent infestation or damage every two weeks at least, until the grain is marketed. And if pest problems are noticed, they have resources at their disposal.

“We’ll handle it on a case-by-case basis,” he says.