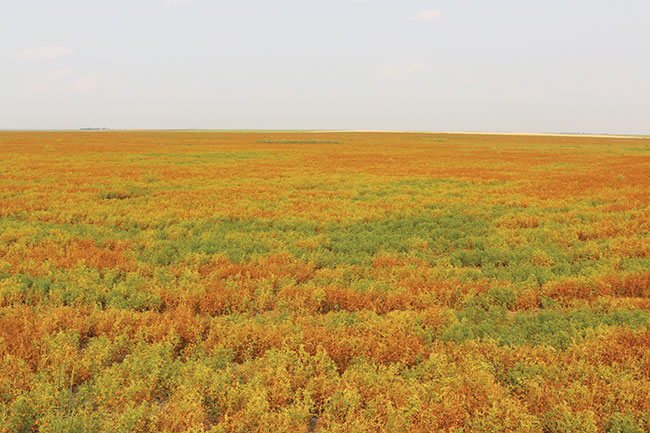 A lentil field at the appropriate stage for a pre-harvest glyphosate application. Photo courtesy of Sherrilyn Phelps, Saskatchewan Pulse Growers.

Glyphosate is just about the most important crop protection tool in a producer’s arsenal. But improper usage could threaten market access for Canadian grain and, ultimately, limit its longevity in Canada, according to experts.

“Farming practices are under greater scrutiny around the world, and the ability to test for residues has grown considerably,” says Cam Dahl, president of Cereals Canada.

2019 will mark the fourth year of Cereals Canada’s Keep it Clean campaign to protect the quality and reputation of Canadian pulses, canola and cereals. The campaign is focused on maintaining market access through outreach and education.

Internationally recognized (Codex Alimentarius) maximum residue limits (MRLs) are available for Canada’s principal field crops, according to Sheryl Tittlemier, program manager for grain safety at the Canadian Grain Commission (CGC). For cereal grains and canola, the Codex MRL for glyphosate is 30 milligrams per kilogram (mg/kg); for soybeans, it’s 20 mg/kg; for maize and dry lentils, the figure is five mg/hg.

The CGC analyzes grain exports for pesticide residues as part of its Cargo Monitoring Program, Tittlemier says. “Throughout the year, vessel loadings are systematically selected and grain is collected using automatic samplers to ensure the tested portion is representative of the whole lot,” she explains. “Samples are tested at the CGC Grain Research Laboratory in Winnipeg using state of the art methods that are very sensitive and very selective.”

Dahl says new testing technology can detect residue levels of one part per billion. This figure translates, says Dahl, to “one second in 33 years.”

According to Chris Willenborg, associate professor in the University of Saskatchewan’s department of plant sciences, when glyphosate is applied correctly, “we tend not to see any issues when we look at the data,” he says.

“One of the biggest challenges that we have with residue levels as an exporting country is when they are applied at the wrong time. For producers, this can happen when you have a lot of acres to cover and you can’t wait for everything to reach appropriate maturity – but with glyphosate you really have to do that.”

Glyphosate is not registered as a desiccant, but some producers use it as a dry-down aid as well as for weed control, which is where they can run into problems.

In most of the crops in which it’s registered for pre-harvest weed control, Willenborg says, glyphosate can’t be used until the crop reaches about 30 per cent seed moisture content. Visual guides for application are recommended in the Crop Protection Guide.

Specific indications of crop maturity differ across crop types, but if producers apply glyphosate prior to 30 per cent moisture, there’s a greater likelihood that the chemical will move into the seed. “This tends to be fairly consistent across crops,” he says.

The physiology of this process can be explained using what scientists call “sources” and “sinks.” Toward the end of the growing season, annual plants are moving most of their nitrogen and sugars out of the “source,” or the leaves, and into the seed itself, the “sink.”

“Because glyphosate is systemic, it moves in the plant’s vascular tissue, or phloem, and that transports it into the seed itself,” Willenborg explains. “The less mature the seeds, the more sugars that translocate into them. That level of movement of sugars declines substantially when the plant is getting to be physiologically mature and it’s drying down.”

Willenborg currently has a project underway in oats to determine the impact of applying glyphosate at various seed moistures.

In 2016, Canadian oat millers decided they wouldn’t purchase oats treated with glyphosate pre-harvest due to fears about market access and baking quality. Willenborg’s project began in an attempt to look at pre-harvest timing of glyphosate in relation to yield, kernel plumpness and thousand seed weight “and assuage fears,” he says. He’s collaborating with Agriculture and Agri-Food Canada research scientist Nancy Ames, who is looking at baking and milling quality parameters, and Tittlemier, who is looking at residues.

A few years ago, before key foreign markets began demanding quality assurances, there weren’t many guidelines available in terms of glyphosate timing based on crop type, but industry groups have quickly developed their own guidelines.

Some plants have clear maturity indicators, such as pulses, when the bottom third of the seeds rattle.

According to the Canola Council of Canada, glyphosate is to be applied when the majority of seeds are yellow to brown in colour and seed moisture is less than 30 per cent (which typically occurs seven to 14 days before harvest).

According to a representative for Manitoba Corn Growers Association (MCGA), in both wheat and barley, guidelines dictate that producers should not apply glyphosate as a pre-harvest aid before achieving 30 per cent moisture content in the latest-maturing portion of the field.

“This year will be another tricky year to time a pre-harvest application because of uneven emergence and maturity, but it is important to be watching for that very last part of a field to reach 30 per cent moisture before spraying,” says Morgan Cott with the MCGA.

It can be tricky to assess when cereals have reached maturity; Willenborg and his colleagues typically dry them down in the microwave and measure their seed moisture content.

But this is a labour-intensive process for producers with large farms, says Willenborg – and this is where they can run into problems.

Glyphosate is not actually an effective desiccant, Willenborg says, because it takes several weeks to fully work and can’t rapidly dry down the seed. Producers should only be using it in crops where there are perennial weed challenges at harvest, he says, when perennial weeds are putting sugars into their root systems to overwinter. Producers using glyphosate to control perennial weeds should time application very carefully to avoid problems.

“I suspect that it’s those one or two low spots where some plants are still immature but the rest of the plants are ready for applications – those are the areas that are creating the issues,” he says, because they are sprayed too early. “Try to wait until those low spots have hit 30 per cent. It’s not 30 per cent across the field – it’s 30 per cent on your greenest spots. Otherwise we get those hot spots that can be detected by our importing nations.”

Willenborg says producers can also choose to spray around these “potholes” and return to spray them later, or direct harvest them at a later date.

“We’re risking not only our stature as the best exporting nation in terms of quality and quantity but also we’re risking glyphosate as a product in public perception,” he says.

Ten to 15 years ago, Willenborg says, the scientific community considered glyphosate one of its safest products, and it’s still considered safe by Canada’s Pest Management Regulatory Authority when used appropriately. But there’s growing scrutiny on glyphosate, partly because of the farming community’s reliance on glyphosate year-in, year-out, he says, which makes it crucially important for farmers to play it safe when it comes to application timing.

“There’s a narrowing focus on the molecule itself, and the unfortunate part is that it’s been the most transformational molecule developed for farming in the last 60 years. No other product can do what it can do at very low prices,” he says. “We have to take any step we can to extend the life of this molecule as an exporting nation.”

Dahl says the Keep it Clean effort is not solely focused on glyphosate, but the product is a key driver.

“What happens on the farm really does matter in international marketplaces,” he says. “The attention farmers pay to ensuring crops are ready for customers and meeting the requirements for pesticide residues and mycotoxins is critically important, and what individual famers do matters.”