Side-banding N at seeding is still the least risky and most efficient N application method. 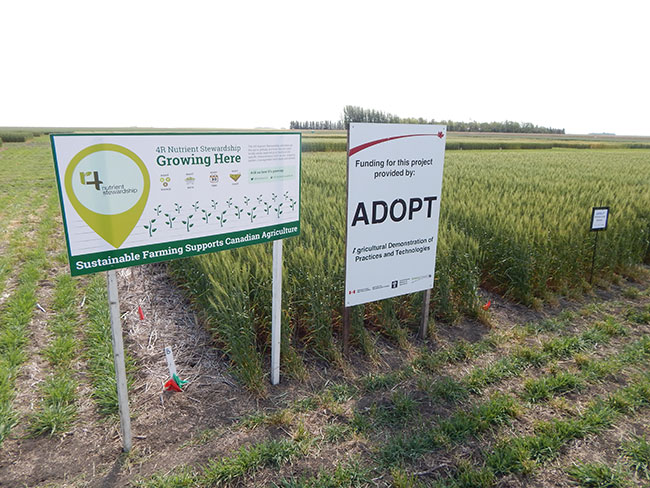 4R nitrogen stewardship for wheat and canola at IHARF. All photos courtesy of Chris Holzapfel.

Currently, the most commonly recommended best management practice (BMP) for nitrogen (N) application is side-row or mid-row band applications at the time of seeding. These placement options dramatically reduce the potential for environmental losses while maintaining seed safety. However, some growers are looking for ways to improve seeding efficiency and increase N management flexibility, particularly for crops with high N requirements like wheat and canola.

A recent project demonstrated different N fertilization strategies according to the 4R principles of the right source, rate, time, and place for fertilizer application. It was conducted to help farmers make informed decisions while taking into consideration both the advantages and potential disadvantages of the various options.

“In 2017, we initiated field trials with spring wheat and canola near Indian Head to demonstrate the response to varying rates, forms, and application method/timing options of N fertilizer,” explains Chris Holzapfel, research manager with Indian Head Agricultural Research Foundation (IHARF) in Saskatchewan. “We continued the demonstrations in 2018 with similar treatments for both wheat and canola, which are both rotationally and economically important crops in Saskatchewan.

“Canola is highly responsive to N fertilizer and often receives fertilizer rates amongst the highest for crops commonly grown in Saskatchewan, while CWRS (Canadian Western Red Spring) wheat is sensitive to N management with regard to both yield and grain protein concentrations.

“In 2019, we continued only the wheat demonstration trials, and also replaced the fall in-soil banding treatments with a spring surface broadcast timing/placement option,” Holzapfel continues. “This allowed us to explore different aspects of 4R N management, and although I like the fall in-soil bands agronomically, I don’t think it is something many producers actually do with the granular products we were looking at.”

The demonstration trials in 2017 and 2018 included 12 N fertilizer treatments for both wheat and canola, and used various N alternative management strategies: incorporating untreated urea, urea ammonium-nitrate, ESN, Agrotain and Super-Urea, and contrasting placement options, including side-banding, pre-seed surface broadcast or in-soil bands, and post-emergent (split) applications at the target rate (130 kilograms per hectare (kg/ha) for wheat and 145 kg/ha for canola).

For wheat, the range of target N rates (soil N plus fertilizer) evaluated were 30, 80, 130 and 180 kg/ha, and for canola the target N rates were 35, 90, 145 and 200 kg/ha. The 2017 demonstrations began in the spring, while the 2018 demonstrations started with fall-applied treatments in October 2017. Various data were collected over the growing season and from harvest samples, including NDVI to assess N response during the season, grain yields and grain protein for wheat.

“We took a lot of care to select the appropriate N rates for the trials,” Holzapfel explains. “The rate selected was intended to allow us to detect differences in N management, and not be excessive or severely limited to the extent that they would not be representative of the crops being grown. We recognize that the rate may have been a bit limiting for yield, and the optimal rate is likely somewhat higher.

“The best practice for determining fertilizer rates remains soil testing and knowing your soil and yield potential for individual fields to try and select an appropriate rate.”

Overall, the results showed that it is hard to beat side-banding at time of seeding as the gold standard for getting nitrogen into the soil as close to the time of crop uptake as possible, under most environmental conditions. “With the dry conditions in both years, the surface applications did not generally perform as well as side-banded N,” Holzapfel says.

“The broadcast N ended up stranded at the surface for quite a while until there was some rain to move it down into the soil. It is well accepted that surface-applications of N need either incorporation or adequate precipitation to move the fertilizer into the rooting zone and minimize losses. While the broadcast N is stranded at the surface there is a risk of volatilization losses, and until the N moves down into the soil, it is not available to the crop. This would explain why the surface applications did not generally perform as well as side-banded N.” 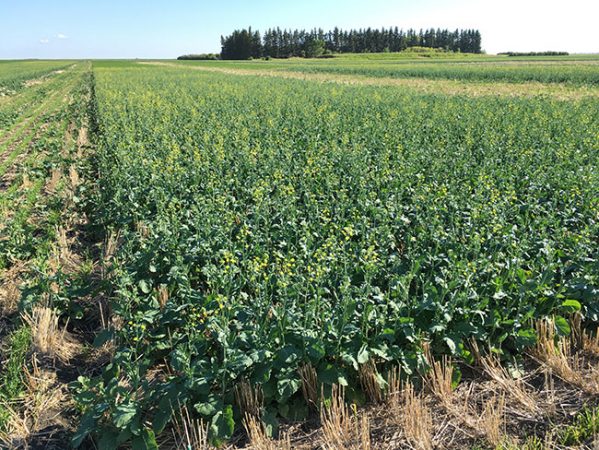 The benefits of side-banding N in wheat were particularly evident in the 2017 protein levels. Although there were no significant differences in wheat yield across the various treatments that year, protein was substantially higher when all of the N was side-banded under the environmental conditions encountered.

“The side-banded N protein levels were in a class of their own; all of the other treatments where pre-seed surface broadcast or split-applications were utilized had significant lower protein. This is consistent with previous research, which has shown that early in-soil applications are generally most advantageous under dry conditions while, under more optimal conditions, N fertilizer placement and timing of application tend to be less critical. This would, to a large extent, explain why the surface applications did not perform as well as side-banded N, especially when protein was considered.”

With respect to formulations, urea and UAN tended to be least effective when applied as a pre-seed broadcast application while urea, Agrotain, and SuperUrea all performed similarly in the split- applications. Both application dates of surface-applied N were subject to stranding at the soil surface and volatilization, as the most significant rainfall events of the season occurred over five weeks after the pre-seed applications and prior to the split applications in 2017.

“Under optimal moisture conditions, timing and placement methods tend to be less important while, under extremely wet conditions, enhanced efficiency (EEF) products and split-applications generally have the greatest potential to be advantageous,” Holzapfel explains. “In very wet years, environmental losses can be high regardless of application method depending on the formulation. It is in these years that denitrification inhibitors or split-applications are likely to be most beneficial.

“The most common examples of EEF products include polymer coatings (i.e. ESN), volatilization inhibitors (i.e. Agrotain) and volatilization/nitrification inhibitors (i.e. SuperUrea). Enhanced efficiency N products are more expensive than their more traditional counterparts. However, this higher cost may be justified by the potential improvements in efficacy and logistic advantages of alternative fertilization practices.”

In 2019, the demonstration trials continued with wheat only, comparing fertilizer treatments of fall broadcast, spring broadcast or spring side-band at seeding, with all the same forms evaluated in 2018. Holzapfel notes that so far the trial is in good condition and all placement/timing options appear to be performing reasonably well, even in the broadcast treatments, where early spring rains did move the N into the soil in a reasonably timely manner. Although there aren’t any visible deficiencies, treatment differences may be detected when the results are finalized this fall after harvest for yield and protein measures.

“On the other hand, we set up a similar demonstration with winter wheat in the fall of 2018, comparing a range of different N rates applied as either a side-band at seeding, spring surface broadcast, or a 50:50 split application. The spring broadcast N applications were made in the last week of April 2019 and, here, the fertilizer sat for quite a while on the surface before there was sufficient rain to move it into the rooting zone,” Holzapfel says.

“In this case, it looks like there definitely was an advantage with the full amount of N side-banded at the time of fall seeding, which ensured the winter wheat had access to the N when it was needed. We will have final results on yield and protein once harvest is completed.”

“Although side-banding N remains the benchmark and is the least risky and most efficient application method for N regardless of form, growers do consider all kind of alternatives, mostly for logistics reasons,” Holzapfel says. “Under the 4R N management practices, first and foremost consider the rate, placement method and timing of N applications. If all of those factors are done right, then getting the right form may be less critical.

“In my experience, if you do a good job of managing N under normal conditions in well-drained fields and not excessive moisture, there doesn’t tend to be a lot of difference in performance amongst the major forms. If conditions are such that the N is more susceptible to losses, then consider some of the options that can protect against the types of losses that are most likely to occur. Of course, results can vary widely from season to season with
weather conditions.”