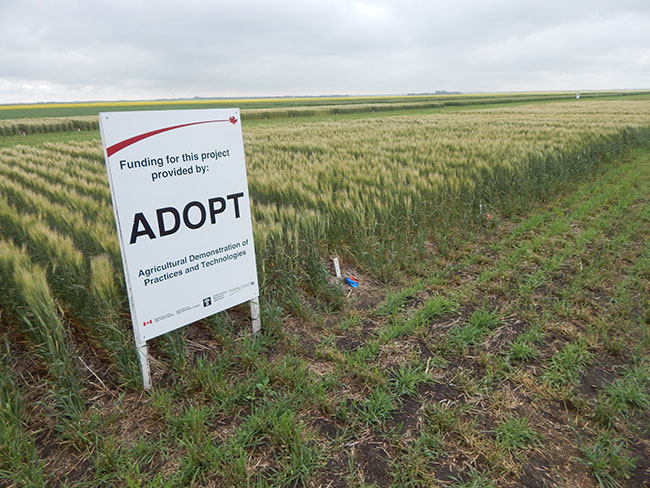 How late can you seed? How much nitrogen (N) fertilizer to put down with the seed, if any? Is spring broadcast N efficient? These are some of the questions farmers consider when seeding winter wheat in the fall. The answers very much depend on where you farm and how much risk you can tolerate. Demonstration projects in Saskatchewan have built upon previous research to help provide some answers.

“As a general rule, when you apply nitrogen is driven by environment. If all the nitrogen is put down at time of seeding in the fall, there is a risk of potential losses in wetter environments. But in drier environments, spring broadcasting nitrogen could end up being stranded or lost to volatilization,” says Chris Holzapfel, research manager with the Indian Head Research Foundation in Indian Head, Sask.

The objective was to demonstrate winter wheat responses to N rate when all the N was applied as urea either in a sideband during seeding in the fall, early spring broadcast, or a split application, with 50 per cent of the N side-banded and the remainder as an early season broadcast application. Nitrogen rates include a zero N control, as well as 53, 70, 107, 134, and 160 pounds total N per acre (lb. N/ac), including soil residual N measured with fall soil sampling (zero, 60, 90, 120, 150, 180 kilograms of N per hectare (kg N/ha)). Enhanced efficiency fertilizers were not assessed in this trial.

Fall seeding conditions were generally good in the first two years, with seed placed into moisture on Sept. 21, 2018, and Sept. 24, 2019, followed by cool, dry weather. Holzapfel says these weather conditions were ideal because it allowed the crop to get established but meant slow conversion to nitrate-N, which lowers the risk of leaching or denitrification in the fall and early spring. Following the spring broadcast application, 0.5 to 0.6 inches of precipitation occurred within 24 hours of seeding, followed by dry growing seasons, with 51 to 66 per cent of long-term averages.

“The precipitation received after spring broadcast applications was likely sufficient to move N into the soil but may not have completely mitigated volatilization losses,” Holzapfel says.

Yield was maximized when fertilizer plus soil residual was in the 107 to 134 lb. N/ac range. Average yields over the two years at these rates were 60 to 65 bushels per acre (bu/ac). This was considered somewhat below average, due to the dry springs encountered both years.

“I think the difference in 2020 was that the spring broadcast nitrogen was applied two weeks later than in 2019. The crop probably lacked some early season nitrogen and that hurt yield,” Holzapfel says. 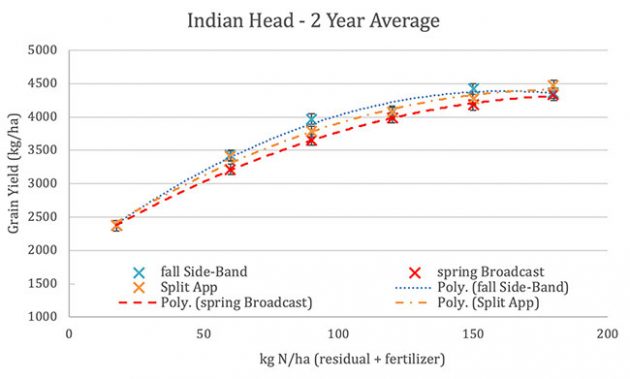 As expected, protein generally peaked at slightly higher rates than yield, but the economic merits of fertilizing for maximum protein vary depending on where the grain is marketed and whether any premiums/discounts are being offered, Holzapfel says. Averaged over the two years, spring broadcast N resulted in slightly higher protein content, at 12.33 per cent, compared to side-banded N at 11.93 per cent and the split application at 12.06 per cent.

In Swift Current, Sask., Amber Wall with the Wheatland Conservation Area ran the same demonstration trial in 2018/2019. Winter wheat was seeded into very dry soil, but from seeding to harvest the crop received adequate moisture, with most of the rainfall accumulating from June 14, 2019, to harvest.

“We didn’t receive any rain after spring broadcasting nitrogen on May 14 until one month later. The nitrogen likely became stranded and there were probably some volatilization losses,” Wall says. “This meant that the timing of precipitation favoured treatments with some or all of the nitrogen applied in the fall.” 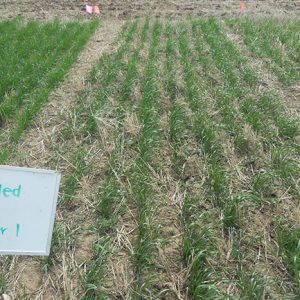 Research found that winter wheat could be successfully seeded later into the fall. Photo courtesy of Amber Wall.. 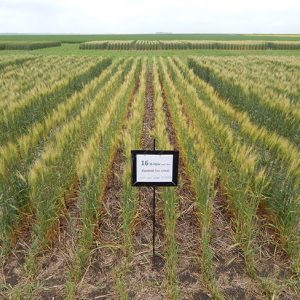 Winter wheat yield was maximized when fertilizer plus soil residual was in the 107 to 150 lb. N/ac range at Indian Head. Photo courtesy of Chris Holzapfel.

“It is really hard to know what the weather is going to be like ahead of time, so if farmers don’t want to put all their eggs in one basket, split applications look like the way to go in drier areas like ours,” Wall says.

Holzapfel agrees and says that applying all side-banded N at seeding is safest when later seeding is combined with relatively dry/cool climates and well-drained fields. He says that deferring at least some of the crop’s N requirements to a spring broadcast can be a good practice if seeding occurs early or in regions that are warmer and wetter on average. In wetter areas, where the risk of leaching or denitrification is higher, farmers often utilize a split application or broadcast all of their N in the spring.

“Indian Head can go either way with being wet or dry in the fall, so a split application seems to work pretty well here,” Holzapfel says.

The 2021 Indian Head results will be interesting, as the crop was seeded into very dry soil and almost no crop emerged. This could be the year that really highlights the risk management benefits of a split N application.

Assessing seeding dates
Wall also assessed seeding dates in the fall of 2018 and 2019 in an ADOPT demonstration trial. The trial was in response to seeding date research conducted by University of Manitoba assistant professor Yvonne Lawley from 2013 through 2018 at 13 locations across the Prairies. This research found that 18 site-years followed the expected trend of declining yield with later planting, while 12 site-years were unresponsive to seeding date. Generally, yield reductions were not as large as expected for seeding in October.

When Wall set up her trial, the crop insurance seeding date for winter wheat was Sept. 15. Wall wanted to demonstrate whether that seeding date could be moved later (Saskatchewan Crop Insurance coverage was moved to Sept. 30 after the demonstration started). 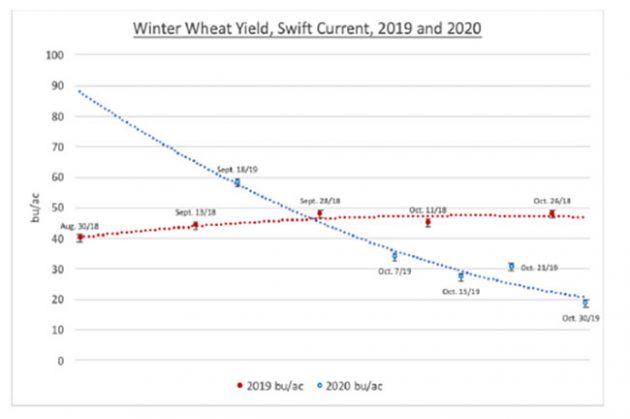 The two years were complete opposites. The first year was very dry at fall seeding and little precipitation fell until June 14. The fall of 2019 was very wet and delayed winter wheat seeding until Sept. 18 as the earliest date. Yield results also followed opposite trends. In the dry year of 2018/2019, yield differences were relatively flat. However, in the wetter 2019/2020 growing season, winter wheat yield declined with later seeding dates.

“From these results, I would say that delaying seeding too long past Sept. 30 will likely cause yield loss. If you want to seed into the first or second week of October, the risk can be higher depending on the growing conditions,” Wall says. “But from the research that has been done, I think moving the crop insurance seeding deadline later was a good decision.”