A major research project called SoyaGen is tapping into the power of genomics to really boost Canadian soybean breeding advances. 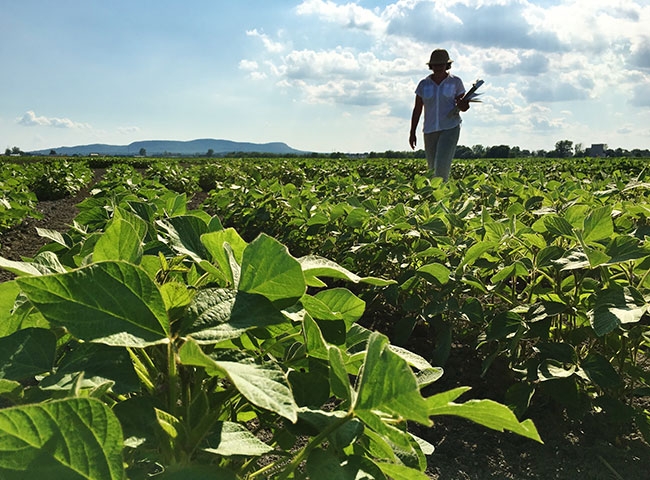 Louise O’Donoughue of CéROM walks through her soybean plots that are part of the SoyaGen maturity trials across Canada. A major research project called SoyaGen is tapping into the power of genomics

Belzile and Richard Bélanger, both of Université Laval, are leading this four-year project, which started in 2015. The team of researchers that Belzile and Bélanger put together come from Laval, Agriculture and Agri-Food Canada, Centre de recherche sur les grains (CÉROM), University of Guelph, University of Saskatchewan, and Prograin. Belzile and Bélanger have also brought together diverse agencies to fund SoyaGen, including grower organizations in both Eastern and Western Canada, Western Grains Research Foundation, seed industry companies, Genome Canada, Génome Québec and others.

This collaborative initiative is addressing those three challenges through five activities.

The researchers used two approaches to capture that genetic information. “The most comprehensive examinations were what we call whole-genome sequencing – determining the entire sequence of all the DNA in a specific soybean variety. We did that for 102 different varieties that we felt captured the diversity present in the Canadian soybean crop,” he explains.

“Then in parallel, we developed methods that allowed us to do more of a genome scan. So instead of inspecting every single base in the nucleotides [the building blocks of DNA] – there’s a billion different [base pairs] in there – we wanted to do more of a spot check here and there, which would be a lot less expensive but would still yield a lot of useful information,” Belzile says. “By pulling these two together, we are able to provide breeders and research scientists with a very good idea of how varieties differ from each other, how closely related they are, and those sorts of things.”

This genomic information is invaluable for crucial tasks like the use of DNA markers to rapidly screen breeding materials for traits of interest. Using markers is much more efficient than having to take weeks or months to grow seeds into plants and test them for the traits of interest.

In addition, the researchers have transferred their genetic characterization methods to the genotyping service already operating at Laval. “Now, if somebody from the private or public sector wants to have their soybean lines characterized using these technologies, this service is available,” Belzile says.

“In Canada, we have a [soybean breeding] system with really big players, the multinationals, and some companies that are more local. Typically these more local companies don’t have the full range of equipment and expertise that the multinationals might have. So for them, being able to outsource some of this high-level genetic analysis evens the playing field so they can be more competitive with the bigger players.”

High yields in early-maturing varieties
“Activity 2 is tied into the question of adaptation and maturity,” Belzile says. “We need a good understanding of the genes that regulate and hasten maturity in order to develop soybean varieties that reach maturity within the time frame that exists in the different regions of the country.”

So, some of the work in Activity 2 involves identifying and understanding the genes affecting maturity. Through characterizing the 102 lines in Activity 1, the researchers have been able to group those lines into five different maturity packages – different combinations of genes that control maturity.

The Activity 2 team is now testing those five packages at eight sites across the country to better understand how their genetic characteristics allow them to adapt to different regions. “At each site, we’re revealing what is the best package for that site. So, if you want a variety that is highly adapted and will yield better in Saskatoon, then you would need to put together this particular package, and if you want a variety for the Montreal area, it might be a different package,” he says.

“So, in terms of information that is of immediate relevance and use to breeders in developing adapted and better adapted varieties, this is very concrete and very useful.”

Easier race identification
Activity 3 revolves around the races of soybean cyst nematode and of  Phytophthora sojae, which causes phytophthora root rot. Knowing which specific races/pathotypes/strains of a pathogen occur in an area is important for both breeders and growers. Breeders need that information when using genes that confer resistance to only certain races of the pathogen. And growers need to be able to choose varieties with the right resistance genes for the races in their fields. However, current techniques to determine the races of Phytophthora sojae and soybean cyst nematode have limitations such as being time-consuming, complicated and/or unreliable.

For Phytophthora sojae, the Activity 3 team has developed a faster, more reliable way to determine the race of an isolate. Belzile says, “With phytophthora, we are right now in the phase of developing a diagnostic kit that we hope will be of interest to some diagnostic labs so they could offer the testing service to farmers in the future. A similar type of kit is also under consideration for soybean cyst nematode although it is more difficult to get to the level of precision needed.”

As well, the researchers hope to collaborate with government or industry to conduct systematic sampling for Phytophthora sojae in Canada’s soybean-growing areas. Then they’ll use the new diagnostic test and produce a map of the distribution of the pathogen’s races for use by growers and breeders. Ideally the map would be updated every few years to keep up with the pathogen’s race dynamics.

Better resistance genes,
Activity 4 is developing new, more effective resistance genes to fight Phytophthora sojae, soybean cyst nematode and Sclerotinia sclerotiorum, the cause of white mould. For each of these pathogens, the research team is identifying soybean lines with new sources of resistance and developing DNA markers associated with these resistance genes. Breeders will use the markers to bring the new resistance genes into their breeding materials.

Louise O’Donoughue of CéROM walks through her soybean plots that are part of the SoyaGen maturity trials across Canada.

Accelerating adoption on the Prairies
“In the fifth activity, we’re trying to understand the barriers to soybean adoption in Western Canada,” he says. “For example, is it that farmers feel they don’t have enough information about how to grow the crop? Is it that there is a lack of adapted germplasm that will do well in their region? What are the issues facing farmers in terms marketing their crop, transporting it to crushing plants? These are the types of questions we are trying to answer.”

This socio-economic work will be engaging growers, agronomic consultants, extension specialists and others in the research process, in the design of better extension tools and in the development of an extension strategy to increase the adoption and success of soybean production on the Prairies.

Leveraging the data to streamline breeding
The Canadian soybean genomic information and the genotyping methods developed in Activity 1 provide a powerful springboard for further soybean breeding work. One of the ways the researchers are working toward leveraging this effort is by developing a new method for selecting promising breeding materials.

“We want to use information on the genetic makeup of a soybean line to determine whether or not that line is promising or not,” explains Belzile. “Right now, a breeder makes a cross between individual A and individual B. At some point down the road, the breeder looks at the progeny of that cross and how the plants are behaving in the field and makes selections based on that.” It takes many years, a lot of plots, and a lot of data collection and analysis to assess something like the yield potential of a specific progeny.

So a breeder could determine the most promising plants much earlier in the breeding process, saving time and money – and bringing new varieties to growers faster.

“We already use genetic information to select lines that have certain characteristics. For example, you might have a genetic test that will tell you that this line has the right gene to be resistant to soybean cyst nematode. That’s one test for one trait,” he explains.

“But with genomic selection, we’re examining thousands and thousands of DNA markers in all of our lines. And based on that, we are predicting the behaviour of many, many traits – yield, seed protein content, oil content, maturity, height and all these other associated traits that typically a breeder will rely on to make predictions.”

Belzile thinks one area where genomic selection is particularly promising is for complex traits like yield. “Yield depends on probably hundreds if not more different genes. You can’t find one marker for yield; you have to rely on a much, much wider array of markers. Genomic selection can capture all of that genome-wide information.”