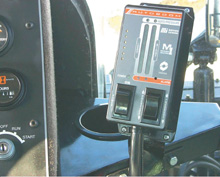 In the spirit of 'the more you know, the better you grow', a number of researchers
and agronomists have been urging producers to take full advantage of an increasing
volume of information on soybean physiology. Successive years of weather extremes
combine as one driver towards a better understanding. But new and emerging markets
also have changed the process by which soybeans are being produced, harvested,
stored, transported and ultimately processed. Thus, the more that is known,
the better for the grower.

In terms of the physiology of soybeans, growers seem to know more about which
variety to plant based on soil type or geographic location. Yet, according to
some researchers and advisors, a greater understanding of the importance of
vegetative versus reproductive stages of soybeans or the four key elements for
higher yields, is limited.

Admittedly, some of this information has only recently become commonplace but
to some in the industry, like Dr. Gary Ablett, it is now time to start learning.
As director of Ridgetown College and a soybean researcher, Ablett is familiar
with industry estimates that suggest maximum theoretical yields for soybeans
that exceed 150bu/ac. Although that mark has never been reached, Ablett recalls
those rare years where yields have topped 100bu/ac. "Some of the theoretical
possibilities are with genotypes that would be superior to what we have now,"
he says. "And I think that 150bu/ac is, if anything, a conservative number."

As impressive as that 150bu/ac level sounds, the current economic climate and
processing capacity in the province makes it an unlikely, if not unwanted, scenario.
Therefore, the time and effort might be put to better use focussing on those
aspects of production which can be influenced, allowing the industry to develop
gradually. Ablett cites those four key elements that lead to higher yields:

These are not ranked in a particular order, but he notes the first three dictate
what will happen in the fourth. Of the first three, however, reducing stress
is arguably the most difficult to control on a consistent basis, as witnessed
during the growing seasons from 2000 to 2004.

Although there are these four critical elements, soybean growth can be divided
into two phases: vegetative and reproductive. Asked which is the most important,
Horst Bohner, soybean specialist with the Ontario Ministry of Agriculture and
Food in Stratford, acknowledges the reproductive stage, with its flowering and
seed filling period, to be the most critical to overall yield. But the second
stage relies on a healthy and productive first stage.

Emergence, development of the unifoliate and subsequent trifoliate leaves has
to come first. "Basically what you're trying to get out of the vegetative
stage is as much height as possible along with the number of trifoliate leaves
before it starts to flower," explains Bohner, adding that stress plays
a much smaller role in the vegetative stage than during the reproductive stage.

Even if stress impacts are fewer, producers are nonetheless faced with the
prospect of replanting their soybean fields during the vegetative stage, a decision
which Bohner acknowledges to be a difficult one. "If it's early in the
season your plant stand is less than 70 percent, then you have to think about
replanting right there," he says. "If it's still uniform and about
70 percent of your plants made it through and still look healthy, you're still
expected to get about 95 percent yield." The date of the decision to replant
is also critical; arriving at this point in the middle of June makes the decision
that much harder than if it occurs earlier.

Another aspect that has been the subject of considerable study recently is
row width. As a general guideline, Bohner notes that the fewer heat units, the
greater the need for narrower rows. "Below 2800CHU, there is an advantage
to getting away from 30 inch rows down to 14 inch rows or even less," says
Bohner. "The main advantage is that you're getting the canopy closed sooner
and therefore the crop is absorbing more light." The other benefit to faster
canopy closure is improved weed control by reducing the light available to competing
weeds.

In almost all cases, the earlier the planting date, the better the yield.

Stages of vegetative growth period
VE stands for vegetative emergence of the developing plant, usually a period
of about one to two weeks after planting. A primary root is the first to grow
from the seed and projects itself downward to anchor the plant growth as the
hypocotyl of the stem begins elongating towards the soil surface. The anchoring
effect allows the cotyledons (seed leaves) to be pulled to the surface for emergence.
Once emerged, the hypocotyl straightens then stops growing with the unfolding
of the cotyledons. The expansion and unfolding of the unifoliate leaves starts
the VC stage, which is followed by the development of the numbered vegetative
stages.

The node stage is counted by the number of nodes on the main stem with fully
developed true leaves. A fully developed leaf is defined as one that has a leaf
above it, at the next node, with an unrolled leaf.

V2 (second node) plants are 15cm to 20cm (six to eight inches) tall. Three
nodes (the unifoliate and the first two trifoliates) are also present although
their leaflets are unfolded.

V6 (sixth node) sees the plant reach to 35.6cm (14 inches) tall. Seven nodes
now have leaves with unfolded leaflets. The two unifoliate leaves and cotyledons
have fallen off the plant by this time and new vegetative stages appear every
three days.

The date of planting also impacts maturity, seed weight and seed filling period
(expressed in heat units). Soybean plants overlap in their vegetative and reproductive
growth stages. As the days get shorter, the flowering period and plant maturity
in soybeans quickens. Soybeans also fix their own nitrogen through a unique
and symbiotic relationship with the bacterium Bradyrhizobium japonicum.

Watch for Part II of Soybean physiology in next
month's issue of Top Crop Manager: Reproduction and maturity.