News
From farming to pharming 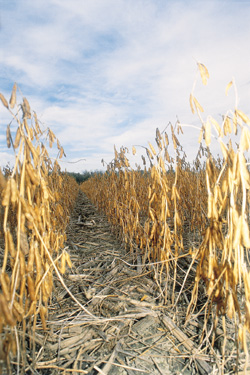 As Canada's only crop with a national minimum standard for Identity Preservation
(IP), Canadian soybeans have a well-established history of traceability in key
export markets. That is thanks to 15 years of IP experience and Canadian growers'
unmatched ability to excel in producing, harvesting, storing and shipping soybeans
in a segregated manner.

Canada's reputation has paid off, long allowing the soybean industry to take
advantage of export opportunities for food grade soybeans, and putting the industry
in prime position for future industrial end uses.

"Our ability to adapt and refine our already-sophisticated IP standard
is what will keep Canada ahead of our competition in specialty niche markets
that will be opening in the future, such as soybeans for industrial purposes,"
says Bill Riley who is market development manager for Ontario Soybean Growers
(OSG).

While the Canadian Soybean Export Association (CSEA) IP standard is among the
most sophisticated crop IP systems in the world, experts say its beginning was
much more grassroots, with a simple end-goal of reassuring overseas customers
that they were getting what they paid for.

"IP was born when the industry moved from shipping generic white hilum
soybeans, to specific varieties with traits that benefitted the end-user,"
says Sue Robert of Thompsons Limited's food products department. "We needed
to provide documentation to our customers overseas to prove that we were shipping
pure varieties."

Individual export companies such as Thompsons, Maple Leaf and others worked
with customers to create sophisticated IP documentation systems. The documentation
covered all aspects of soybean production and processing, from purchasing certified
seed, to verifying that shipping containers were sealed until customers opened
them overseas.

Canada had a natural advantage over competitors in the US because its smaller
elevators were well equipped to segregate corn, soybeans and wheat. Smaller-scale
field production and elevators allowed Canadian exporters to devote the attention
to detail that IP requires. But as time went on, the US developed similar IP
programs, and the Canadian Soybean Export Association (CSEA) decided Canada's
soybean industry would benefit from a National IP standard.

"We were competing against exporters in the US who have state-certified
programs," says Brad Richmond, senior trader with Maple Leaf Foods International.
Richmond was chair of CSEA for much of the time the industry was pushing to
develop the CSEA National IP Standard. "Our National IP program has helped
us to distinguish Canadian soybeans from other sources."

The CSEA National IP Program was launched in September 2001, and provides Canada's
soybean industry a competitive edge to specialty markets. The program –
a minimum standard for IP that is third party audited by the Canadian Grain
Commission – allows CSEA to promote the strict protocols followed in Canada
to specialty markets.

And those protocols are what many experts are counting on to take advantage
of new frontiers in agriculture.

One of the larger issues for the soybean industry over the next few years will
be the labelling of trans fats, says Riley. He says food processors could choose
to use alternative fats that result in lower trans fatty acid levels.

There are several low linolenic soybean varieties (which result in lower trans
fats in foods) being developed that may be available commercially in Canada
by 2006. This, says Riley, is when IP will become more important than ever.

"The whole industry won't turn towards low-lin soybeans because there
are still some benefits to linolenic acid when the oil isn't being hydrogenated.
We are going to end up with the low-lin soybeans as a specialty crush market
that will need to be segregated," he says. "There will be many other
food quality traits such as soybeans lower in saturated fat, improved flavour
and shelf life that will also need to be segregated in the near future."

Canada, with its soybean IP system is also well-poised for other opportunities
requiring careful segregation. Because soybean plants are self-pollinated, there
is little chance of 'gene drift' making soybeans a good candidate for production
of varieties with specific traits for industrial purposes that require segregation.
Coupling this with proven IP expertise will help Canada's soybean industry to
diversify in a global commodity priced market.

"Well developed IP systems will be critical for genetically modified crop
production for industrial purposes," says Dr. Jim Brandle, a leading scientist
with Agriculture and Agri-Food Canada in the area of molecular farming and value-added
traits for crops. "Some opportunities will be small-scale and others might
command a large acreage. For example, soybeans might be a good vehicle for the
production of low risk industrial applications for high strength material like
that used in bullet-proof vests."

Brandle says commercial production of bio-pharmaceuticals is still several
years away because that industry is working to overcome hurdles such as the
concentration of the pharmaceutical material in target tissues.

Until those new opportunities present themselves, the goal for the CSEA IP
standard is to continually review and compare with other international quality
standards to stay on top of the specialty food grade market.

In fall 2003, the CSEA IP standard was incorporated into the Canadian Grain
Commission's Canadian IP Recognition System (CIPRS). CIPRS is modelled on ISO
9001:2000, but is unique in that it requires very specific requirements for
IP and traceability. With 14 Canadian soybean exporters certified, it is estimated
that 35 percent of all Canadian IP soybean exports are shipped with CIPRS certification.

Adds Richmond: "We've actively promoted our CIPRS certification to our
customers. It has raised the bar for IP in the edible soybean business and will
help Canada's soybean industry to remain competitive."