The soybeans scattered in this metre square are at a density that represents 110bu/ac.

There is much a grower can do to bring a field of soybeans towards its maximum
achievable yield. And even this practical yield level is well below the theoretical
physiological yield potential of the crop.

"It is the relationship between soybean physiology and yield that drives
the interest of agronomists, scientists and producers," says Dr. Gary Ablett
who is a soybean plant breeder and chair of the Department of Plant Agriculture
at the University of Guelph. "The resultant yield of soybeans is the product
of countless physiological processes (photosynthesis, nitrogen fixation, transpiration,
respiration and so on) and their interaction with both abiotic factors (temperature,
photoperiod, moisture) and biotic stresses (weeds, insects, diseases)."
In total, this represents an amazingly complex interaction of components. "In
reality though, it can be distilled into inputs and outputs. The output we are
most interested in, of course, is yield and seed yield," he adds.

Two of the principal elements that comprise the soybean seed are carbon and
nitrogen. Carbon compounds are the product of photosynthesis and nitrogen compounds
are generated by both nitrogen fixation from the atmosphere and nitrogen accumulated
from the soil.

"You can increase the total seasonal amount of carbon fixed through photosynthesis
by increasing the rate of photosynthesis per leaf or by increasing the amount
of total light intercepted. Recent studies have shown that although there are
some genetic differences for the rate of photosynthesis, they are not very large
and are considered insignificant. In addition, increasing photosynthetic rate
through crop models has also shown only very small gains. This just doesn't
seem to be a very fruitful avenue of research at this time," says Ablett.
"The other option, then, is to increase the total amount of light intercepted
throughout the growing season." Ablett uses established yield equations
that estimate realistic yield potential of soybeans is 110bu/ac.

A yield as large as 100bu/ac would require something in the region of 600lb/ac
of nitrogen to grow, given perfect conditions. "Clearly this represents
a significant challenge: to accumulate that much nitrogen to support maximum
yield levels. US soybean researcher, Tom Sinclair points out that both carbon
and nitrogen have to be considered together, not independently, when considering
physiological process to maximize yields," says Ablett. 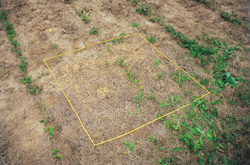 Management strategies that support this concept include earlier planting dates,
full season varieties, narrow rows, higher seeding rates and a well nodulated
crop. All of these are well proven in Ontario growing regions and Ablett suggests
these apply in Manitoba as well.

In addition, the relationship between seed size and yield also shows that negative
trend, although there is some confounding with protein levels. The same relationship
can be said for the small-seeded natto types, where yield levels are typically
80 to 85 percent of standard soybeans. In this case, it is the small seed size
in itself that limits yield potential along with the drag from 'wild soybeans'
where the small-seeded trait typically comes from.

Northerly growing regions, like Ontario and western Canada and northern US
states, are also well suited to produce higher protein (greater N content) soybean.
Consequently, varieties are developed to take advantage of this and made available
in regions suited to the amount of heat and growing days.

Beyond that, growers can assess particular varieties based on their own experiences
and, especially in the case of food grade soybeans, whether they grow their
crops in an identity preserved contract.

Radiation use efficiency is the ratio of accumulated above-ground crop
mass to intercepted total solar radiation. This is expressed in grams
per mega joule (g/MJ) and the maximum value is about 1.1g/MJ. RUE is also
a product of leaf area index and only reaches a maximum as the leaf area
index (area of leaves per area of ground) reaches 2.5.

Light interception is simply the total solar radiation intercepted over
the growing season expressed in mega joules per m2. Again, the accepted
maximum is 1200MJ/m2.


Related
Soybean physiology: Introduction and the vegetative phase
Getting to the heart of durum wheat physiology
Are soybean genetics improving?
Soybean nutrient use analyzed