News
The stages of growth

The 2001 growing season brought home an unpleasant truth for soybean growers:
as resilient as plants have been in the past, there is a stress point from which
they cannot recover. And it follows the baseball adage of 'three strikes and
you're out!' The trio of stress factors that hit during the middle of summer
in 2001, the drought, extreme heat (with temperature fluctuations) and the severe
aphid infestation, simply proved too much for Ontario soybeans.

In terms of growth stages, soybeans can be divided into two periods: vegetative
and reproductive. The first period is vital from the perspective that it gets
the plant from the seed to the reproductive period. The vegetative phase is
a time for establishing height and the number of trifoliate leaves. Yet without
One, there can be no Two. And while it can be more damaging to have stress during
the reproductive stage, enough stress at any phase can inhibit or kill the plant.
But stress factors such as temperature or moisture levels have less of an impact
on final yield if the stress is removed and the plant can recover during the
reproductive stage.

Horst Bohner, soybean specialist with the Ontario Ministry of Agriculture in
Stratford, acknowledges that the three stress factors, striking when they did
in 2001 particularly at R4 and R5, were too much at once. “If you took
even one of those away, the effect of the other two would not have been nearly
as severe. But you put all three together… 'three strikes and you're out',”
he says. Of particular concern was the very high soybean aphid populations and
the 15 days in late July and early August 2001 during which the temperature
was above 30 degrees C. 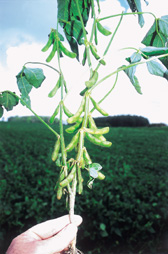 Of course understanding the impacts of stress will not help lessen their likelihood.
Dr. Gary Ablett, interim chair of the plant agriculture department at Ridgetown
College, University of Guelph and a soybean researcher, agrees that insects,
diseases and weeds can be checked and monitored to varying degrees. Even planting
high quality seed and matching seed rates to soil types as part of good agronomic
practices can be controlled. But stress factors like weather conditions are
beyond the control of growers.

“It's kind of difficult to measure some things but then the ultimate measure
is yield,” says Ablett, who identifies uniform and healthy stands, proper
agronomic practices, a lack of stress and a long, effective seed filling period
as the four key elements to maximum yields. In 2001, it was the abundance of
weather-related stresses that hurt the seed filling period.

Bohner notes that soybeans in Ontario and in the northern US are indeterminate:
that is, they have a period where vegetative and reproductive stages overlap.
In the southern US, the stages have little or no such period, limiting the window
for flowering. Within the reproductive stage, the soybean begins its flowering
phase, followed by pod development and seed filling. Weather stress at flowering
has less of an impact on yield than at seed filling (see Table 1).

In 2001, extreme heat and minimum moisture caused flowering in many plants
to be aborted. Under normal growing conditions, a soybean plant, despite being
self pollinating, sees less than half the number of flowers develop into pods.
That year, drought and extreme heat reduced those numbers even further. Had
there been a significant rainfall during flowering, more flowers could have
developed into fully mature pods containing seed.

According to both Ablett and Bohner, if the steps beyond flowering, those being
pod development and seed filling, can be relatively stress free, then yields
will be higher. A stress such as temperature can be minimized if adequate moisture
is available. The fact that in 2001, there was not enough moisture, along with
the high temperatures compounded the problem. Soybeans that have good moisture
with temperatures of 30 degrees C or higher are not nearly affected as much.

One part of the growth period that Ablett stresses as critical in development
is the 'sink to source' ratio of 'pod and seed' development to the plant's photosynthetic
capacity; the more closely balanced these two components, the higher the yields.
Varieties suited to Ontario conditions have been set up to yield as high as
possible with the 'sink to source' ratio balanced. Early planting dates and
full season varieties serve to increase both these components.

Plants at R5 to R7 grow to 109cm (up to 43 inches) tall, on average, 31 to
64 days after beginning to bloom. This can also be referred to as the V15 to
V23 stage. This period is characterized by rapid seed growth or seed filling.
Dry weight and nutrients are also redistributed from the plant to the seed.
Optimally, the R5 stage begins around the first week of August and continues
through R6 to R8 by early September, taking into account full seed, the beginning
of maturity and full maturity. This is also where the 'sink to source' ratio
comes into effect.

The Bottom Line
This article is very interesting. I will probably pay more attention
to the weather at the R4 and R5 stages of growth in soybeans. Grahame
Hardy, Inkerman, Ontario.

Find Part I of Soybean physiology in the January 2005 issue
of Top Crop Manager on page 27.