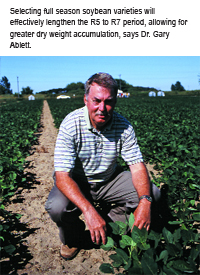 It may not be a new subject. However, with the pace of advancements in germplasm and trait enhancements, select parts from a presentation on the critical period of a soybean’s reproductive phase are certainly worth repeating.

At the 2007 Southwest Diagnostic Days at Ridgetown College, Dr. Gary Ablett emphasized the importance of the R5 to R7 seed filling stage, a period of about 20 days.

Ablett acknowledges that determining these growth stages can be a bit tricky; R5 in a soybean is reached when only one pod somewhere on the top four nodes has seeds that are beginning to develop. The R7 stage is reached when there is one mature pod anywhere on the plant, “and of course, one mature pod means the rest of them are fairly close at the time,” reminds Ablett, the past director of the University of Guelph’s Ridgetown College campus. “But that’s the critical period when most of the dry weight of the seed is being put on. You want the plant healthy and, certainly from a management standpoint, controlling pests, weeds, aphids and mites during that critical period is important. You want to try to ensure the plant is as healthy as it possibly can be.”

In addition to reducing stress during that period, yield potential can be increased by lengthening the duration of the R5 to R7 period. Ablett estimates that genetics control up to 75 percent of the total length of the seed filling period; another 20 percent is affected by the environment. The remaining five percent can be accounted for by management.

The notion of controlling the environment is problematic at best and Ablett is quick to qualify that statement. “Another way of looking at it is, can a grower buffer the impact that the environment is going to have?” poses Ablett. “You don’t want to buffer the positive impacts of course, but rather minimize as much as you can any negative impacts.”

Best start the key
More than 20 years ago, research by Ablett helped establish a new standard for maximizing yields by planting early in May. That standard still applies and is the first recommendation he makes to growers looking to solidify yield and overall plant health. In particular, if a soybean crop is destined for the crush market, a grower should consider planting full season or full season plus varieties.

If a grower is growing for an IP market or must get wheat into the rotation, then pushing maturity is probably not a prudent course of action. Going with mid maturity soybeans may be a safer route to ensure IP seed quality is good and that the soybeans are harvested in good time to plant wheat. “However, it does appear that the 2007 growing season is going to be as good an example as any with the timing of rainfall, where full season varieties were able to take a little bit more advantage of the disruptive nature of the environment than mid or short season varieties,” explains Ablett. “That’s simply because the seed filling period is longer since it’s a full season variety, and so they’re able to weather stresses a little more effectively. I expect full season varieties in 2007 showed a fair difference between the yield potential of those and the mid season and shorter season varieties.”

Pod fill period the other critical point
Seed treatments and planting the best quality seed are other considerations for giving the crop its best start. After emergence however, the seed filling period is quite critical.

Aphids, mites and other pests can be managed with sprays, and Ablett emphasizes the need for diligence in scouting, particularly for late season stresses, including diseases like sclerotinia, stem canker and sudden death. Reduced yields is the primary concern. However, he points to quality issues such as seed coat integrity, freedom from staining or insect damage as other factors that can affect premium contracts, even though most IP growers are not necessarily trying to stretch maturity.

Grower options limited at this point
As important a period as the R5 to R7 is, Dr. Hugh Earl says there are only so many things a grower can do at that point. “It’s obviously critical because at the early part of it, the number one yield determinant is the number of pods. Your actual initial pod formation is pretty much there by R5, but there’s a lot of opportunity for pod abortion for young pods,” explains Earl, a professor and plant physiologist with the University of Guelph. “If you don’t have enough pods, it doesn’t matter how good things get after then, there is already an upper limit on what you can achieve in terms of yield.”

While he agrees with Ablett’s assessment on control of insects and pests, Earl maintains there is little to be done about diseases at R5 to R7. At that point, growers can only monitor the diseases that are affecting their crops and use that information in the planning process the following spring. Sampling for soybean cyst nematode in the fall, after harvest, is another exercise that would help growers. “Nematode infestation always hurts you, but it might hurt you more when you have soil-water limitations,” says Earl, referring to the impact of the dry summer in 2007. “But SCN is something you deal with out front with variety selection and other practices like
rotation. All of these things affect what’s going on during those critical mid reproductive phases, but there are a limited number of things you can address at that stage of crop growth.

Earl believes it is still worthwhile reminding growers about the physiology of yield formation. “When they’re out in a field at a certain time, they need to know what the crop is doing at that point,” he says.