A three-year project conducted by Farming Smarter in Lethbridge, Alta., set out to determine whether seedrow uniformity on 12-inch row spacing resulted in greater yields. This is one of many planter research projects Farming Smarter plans to continue, with more studies happening through 2019 and beyond. 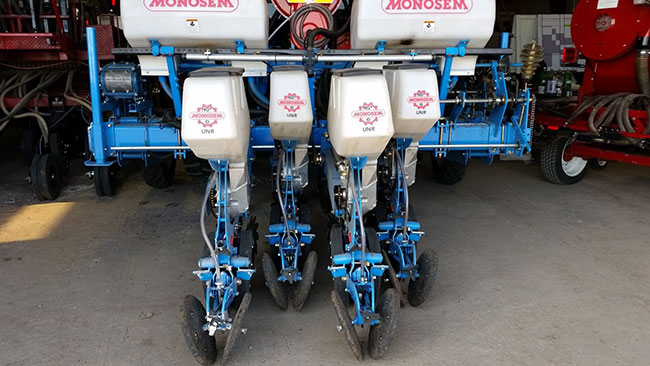 The Monosem planter set up for no-till seeding provided some advantages over a conventional air drill. PhotoS courtesy of Farming Smarter.

“There were some advantages to the planter on 12-inch row spacing. Under irrigation, the planter had significantly higher yield over the three years. Under low yield conditions at some of the dryland sites in 2018, the conventional air drill had a slight advantage,” says Ken Coles, general manager with Farming Smarter.

The planter project ran in Medicine Hat, Alta., and at dryland and irrigated Lethbridge sites. In addition to exploring the yield impacts, the project also looked at determining the optimum seeding rate, and the maximum safe seedrow rate of liquid phosphate fertilizer.

To set up the planter for no-till seeding, residue managers were added ahead of the seedrow opener. A side-band coulter was used to apply granular urea N, and liquid 10-34-0 P fertilizer was dribbled on top of the seedrow before soil closure.

“There is still some work to be done to improve performance in no-till. We switched from a rigid-mounted residue manager to a floating mount, and that helped with seedbed preparation. I think a pneumatic residue manager that maintains a certain down pressure would be a good system,” Coles says.

Since planters traditionally only have seed boxes, another challenge for no-till is to get all the seed and fertilizer product efficiently into the ground. Adapting the product delivery system with an air cart for granular fertilizer and seed, and a liquid delivery system, would improve efficiencies. 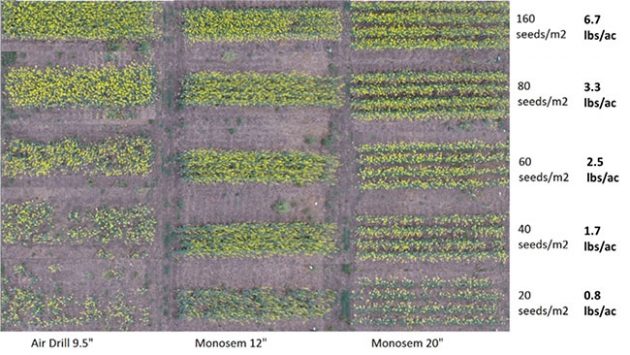 Canola Council of Canada recommends an established plant stand density of five to eight plants per square foot. In the Farming Smarter project, canola emergence as a percentage declined as seeding rate increased. While that seems counter-intuitive, Coles says that as more seeds are placed in the seedrow, there is more self-competition resulting in higher seedling mortality. This is part of the reason planters were originally developed for corn; corn doesn’t like competition from weeds or other corn plants.

“I think the real story is that emergence and stand density didn’t improve yield as much as we expected. When we looked at our data, there wasn’t any correlation between final plant density and yield,” says Coles. “What was more important was the distribution of the established plants, both horizontally and vertically. The 12-inch planter row spacing had the advantage in uniformity.”

For the air drill, seed placement was scattered with concentrations of seed in some areas and bare patches in others. The planter produced more uniform plant stands, but the 20” row spacing was slow to close canopy, resulting in delayed maturity and greater green seed. The 9.5-inch canopy closure only improved at higher seeding rates.

The seeding rate impact on yield was also relative low. Yield did increase when moving from 20 to 80 seeds per square metre, but Coles says the increase was relatively flat for all three row spacings. 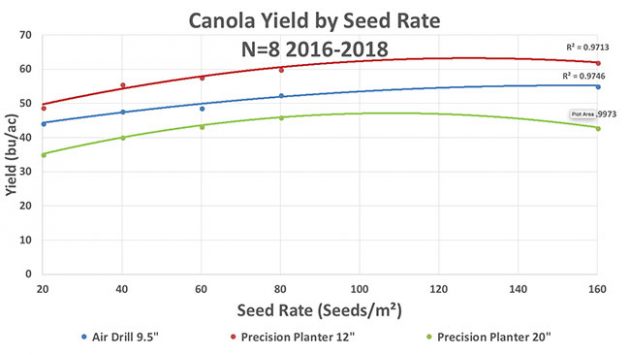 “We’ve been so focused on reducing seeding rates to cut costs with planters, but what was more important in our project was the condition of the seedbed at planting. At Medicine Hat, there was almost always an increase in yield with higher seeding rates and the air drill had an advantage. At site-years with good yield potential, the planter often had a yield advantage at 12-inch row spacing. Under irrigation, the 12-inch planter row spacing produced higher yield in each year. 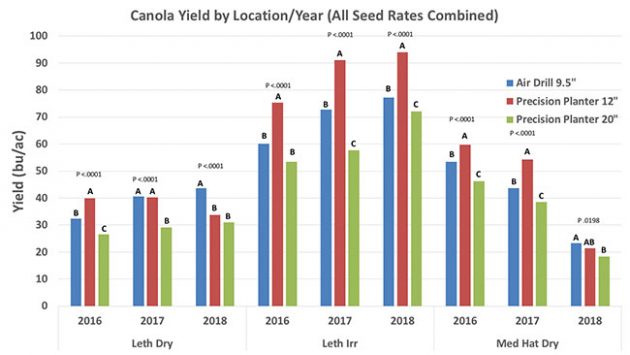 “I was happy to see that there wasn’t any injury up to 40 kg/ha on the narrower row spacings. That’s higher than current recommendations, and growers need to be cautious because seedrow safety is dependent on environment, soil type, and seedbed utilization,” Coles says. “With higher canola yields, we may need to put on more phosphate to maintain soil P fertility.”

Farming Smarter is carrying on with planter research in 2019 using a planter for on-farm research. They will also begin a three-year planter project on seeding pulses.