Narrow row spacing is considered the accepted practice for maximizing grain yields for the majority of crops under most circumstances. However, wider row spacing offers advantages for dealing with heavier and taller crop residues, and reducing equipment costs and maintenance. But how wide is too wide before yield is compromised? 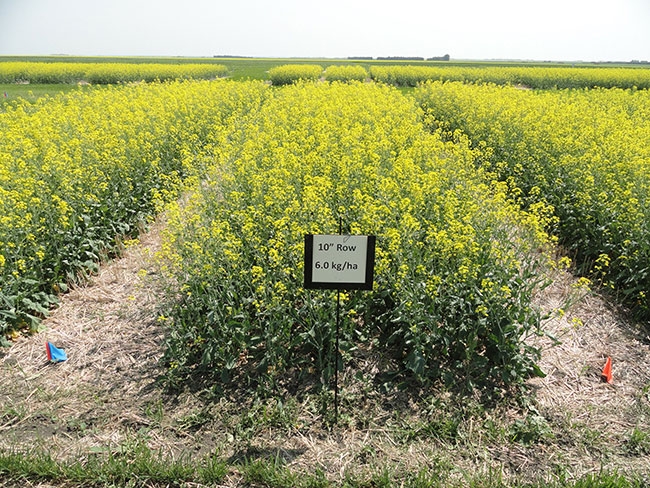 The project included three separate field trials where row spacing levels of 25, 30, 36, 41 and 61 cm (10”, 12”, 14”, 16” and 24”) were combined with varying side-banded urea rates, seeding rates and in-crop herbicide treatments. For all trials, a glufosinate ammonium tolerant (Liberty Link) canola hybrid was seeded using a SeedMaster plot drill at a target rate of 115 to 120 seeds per square metre (/m2) where seeding rate was not dictated by protocol. Various factors were monitored and measured, including: plant density, flowering dates, crop and weed biomass, maturity, seed yield, 1,000 seed weight and per cent green seed.

“Generally, the study results showed that canola is relatively insensitive to increasing row spacing,” Holzapfel says. “Although there were some differences in the various factors as row spacing increased, generally row spacing effects on seed yield were small and in some cases insignificant. Seed yields ranged from approximately 2,800-3,000 kilograms per hectare (kg/ha), with the highest yields at 61 cm (24”) in two of three years, followed by 25 cm (10”). Row spacing effects on yield were always considerably less than environment or other management effects. Row spacing effects on seed size were small and somewhat inconsistent but there was an overall increase in per cent green seed with increasing row spacing in one in four years.”

Seedling mortality increased with increasing row spacing, but adequate plant populations could still be achieved and no detrimental effects on grain quality were observed. When averaged across all years and treatments, plant populations declined by 28 per cent, decreasing from 85 to 62 plants/m2 when row spacing was increased from 25 cm (10”) to 61 cm (24”). The study confirms that seeding rates should not be reduced below typically recommended rates as row spacing is increased. However, at the same time, there was no benefit to using more aggressive seeding rates (i.e. greater than 90 seeds/m2) combined with very wide row spacing (i.e. 24”). Increasing row spacing also resulted in slight but significant delays in flowering and maturity. However, the effects were generally much smaller than those caused by either N fertilizer or seeding rate.

“The results of the side-banded N treatments showed a significant reduction in plant densities with increasing rates of side-banded N at all row spacing levels in all three years,” Holzapfel says. “However, there was evidence of plant populations declining at lower N rates at the widest row spacing compared to the more narrowly spaced rows.

Despite the effects on emergence, canola responded well to side-banded N with sequentially increasing yields right up to 150 kg/ha N in all three years. So although the results suggest that N requirements of canola are likely similar regardless of row spacing, high rates of side-banded N combined with wide row spacing can potentially increase risk of seedling injury.”

The results of the trials comparing canola grown at different row spacing with and without herbicides showed that weed biomass only ever increased with row spacing in the absence of in-crop herbicide and this did not occur in all years.

Failure to control weeds resulted in overall average yield losses of 21 per cent on average with similar yield loss observed regardless of row spacing. A well-timed single in-crop application of glufosinate ammonium kept weed competition acceptably low at all row spacing levels, with reductions of weed biomass ranging from 98 to 99.5 per cent. However, it is important to keep in mind that row spacing effects on weed control put more pressure on herbicides and may be of much greater importance if dealing with hard-to-kill or herbicide-resistant weeds.