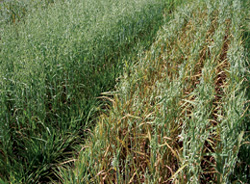 The application of a small amount of fertilizer either in or near the seedrow
at the time of planting has historically been a common practice on the Canadian
prairies. When the use of phosphate-based fertilizers was being introduced into
this region, realistically, seedrow application was the only practical placement
option that was available to growers.

'Pop-up' benefit from seedrow fertilizer
Researchers were quick to realize that this approach to applying P fertilizers
offered some very important advantages. The seedrow method of P placement became
recognized for the early growing season response it provided to cereal crops
grown on relatively P-deficient prairie soils. This 'starter' or 'pop-up' effect
from a limited amount of fertilizer placed in the seedrow served the needs of
prairie farmers very well.

Combined N and P enhances crop uptake
As the need for using some N in addition to P, the fertilizer developed: researchers
were also quick to discover that the combination of these two nutrients within
a common location had a synergistic effect on stimulating the crop uptake of
both nutrients. However, this approach was only effective if the rates of N
being applied were low enough to avoid damage to the germinating seeds.

Early guidelines limited seedrow N
Quite early, research was carried out to define the upper limit for seedrow
application of N with the most common types of seed openers that were used at
that time. These were primarily the disc openers used with press drills or in
some cases, the hoe-type openers. For these seeding systems, the upper limits
for seedrow application of urea-based N was in the range of 20lb/ac N for cereal
crops and 10lb/ac N for canola. These guidelines did not change irrespective
of opener configuration or soil texture.

Seeding systems create a new paradigm
Over time, the narrow disc or hoe openers that dominated the early prairie seeding
systems were displaced with a wide range of seeding openers that spread the
seed and fertilizer over a wider seedrow. Westco researchers were the first
to recognize that this would allow the growers to safely apply higher rates
of fertilizer-N within the seedrow. They aggressively pursued this avenue of
field research, which resulted in the development of the first guidelines for
maximum safe rates of seedrow applied N, that took into consideration the impact
of opener design as well as soil texture.

New guidelines based on SBU concept
The result was the development of the Westco Seedrow N Guidelines that have
been adopted as the standard by the prairie fertilizer industry as well as the
regional extension services. These guidelines were based on the Westco concept
of seedbed utilization (percent SBU). In other words, the wider the degree of
spread of the seed and fertilizer through an individual opener, and the narrower
the spacing between the openers, the more urea fertilizer-N could be applied
within the seedrow. In other words, these were the first guidelines that took
into consideration the amount of the total available seedbed to which seed and
fertilizer was applied could vary widely depending on the design of the seeding
equipment.

Impact of percent SBU is significant
It is critically important to accurately determine the percent SBU of your seeding
equipment. For example, if your seed opener spreads the seed and fertilizer
over a width of two inches and the openers are spaced six inches apart, the
SBU is 33 percent. However, if the space between openers is increased to either
eight inches, 10 or 12 inches, the effective SBU is reduced to 25 percent, 20
percent and 17 percent, respectively. This decline in SBU has a huge impact
on reducing the amount of N that can be safely seedrow applied. Using a urease
inhibitor to treat the urea will allow growers and applicators to exceed the
'safe' rate of urea-N.

Damaging effects of excessive N rates
Applying higher rates of N in the seedrow can be stressful on germinating seedlings.
As well, placing the seed deeper into the soil than necessary adds an additional
stress that can further hinder percent seed emergence. In addition, seed that
is weak and has a low germination percentage can also be more vulnerable to
poor emergence in the presence of higher rates of seedrow applied fertilizer-N.
Therefore, a combination of poor seed and a greater depth of seeding can result
in very poor stand establishment if rates of seedrow applied N are excessive.

Seedbed moisture will reduce risk
The presence of excellent seedbed moisture conditions is important in determining
the degree of germination damage risk that exists from seedrow applied fertilizer.
These favourable seedbed moisture conditions are much more likely to exist in
fields that are direct seeded rather than those that are conventionally tilled.
Of course, a good rainfall following seeding can significantly reduce these
risks, but the inability to accurately predict weather severely limits the practical
value of using this approach.

Soil barrier can protect seed from N damage
Side-band placement of fertilizer away from the seedrow offers a significant
amount of protection from fertilizer-N induced germination damage. However,
studies have clearly demonstrated that a soil barrier of one inch or less between
the seedrow and the fertilizer band does not provide sufficient protection for
the germinating seedlings.

Minimum of 1.5 by one inch separation
Based on research studies, it would appear that keeping the fertilizer band
1.5 inches to the side and one inch below the seedrow will provide the desired
protection against fertilizer-N induced germination damage at reasonable rates
of N application. Field trials have also demonstrated that there was no advantage
for side-banding the fertilizer more than 1.5 inches to the side of the seedrow.

Check side-band openers for wear
Prior to seeding, growers should check out the openers for wear. Worn or bent
openers may result in narrowing the spread of seed and fertilizer, thereby increasing
the risk of germination damage. For side-banding systems that depend on separate
shanks for delivering seed and fertilizer, check for wear at pivot points that
might result in the fertilizer and seed being placed closer together than originally
intended. In addition, any weakening of associated springs can also result in
the seed and fertilizer being placed closer than intended, especially when seeding
deeper than normal.

John Harapiak has approximately 40 years of western Canadian based
fertilizer related experience. He will continue to contribute stories to
Top Crop Manager. He can be contacted by e-mail at: jharapiak@shaw.ca.