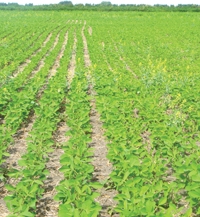 Two different seeding populations and row spacings are shown: 141 Some headway was made in 2010 toward finding good advice for southern Manitoba soybean growers on the subject of planters versus air seeders

Some headway was made in 2010 toward finding good advice for southern Manitoba soybean growers on the subject of planters versus air seeders, or row-crop versus solid-seeded. However, it was an odd growing season. Expect a clearer answer after one or two more growing seasons.

The Manitoba Pulse Growers Association (MPGA), based out of Carman, along with Manitoba Agriculture, Food and Rural Initiatives (MAFRI), launched separate seeding projects in 2010 to come to the aid of the soybean industry. Side-by-side on-farm strip trials with 15 grower-co-operators were monitored by Brent Reid, farm production advisor with MAFRI. “We asked producers to plant their normal 100 percent seeding rate and then adjust to 80 and 60 percent to see where the optimum seeding rate falls,” he says. “This is driven mainly from the high cost of seed, especially when we go to Roundup Ready 2Yield.”

Meanwhile, multiple seeding rates were compared on a single farm at Carman using a planter and two air seeders in replicated field scale trials. These were conducted by Agri Skills, a small research farm operated by consultant Brent VanKoughnet. He put in strips with farm scale seeding equipment running the full width or length of the field, normally between one-quarter- and one-half-mile long. The trials are professionally replicated, mapped, weighed and evaluated.

Both sets of trials had similar weather: an early dry spring ended with rains that delayed seeding. Growing conditions stayed wet until early August, and were wet again for most of September. Some trials were lost or cancelled, but some things also were learned.

The recommended target population for air seeding in Manitoba is 180,000 to 210,000 plants per acre. There are roughly 3500 seeds per pound, and the price of seed in 2010 was around one dollar per pound.

Co-operator trials
Fifteen farmers spaced throughout the Red River Valley and northeast part of the soybean growing area co-operated in MAFRI’s trial. There were nine varieties of soybeans, eight air seeders and 11 planters. The air seeders had different packing systems and were set on spacing of six, seven, eight, 10 or 12 inches. Four planters had 15-inch row spacing, two had 22-inch rows and five had 30-inch rows. “We discovered a trend for both, that as plant population goes up, the yields go up,” Reid says. “The trend line in yield response is not as steep for planters as for air seeders. Planters give a much better survival rate, between what’s planted and what’s actually growing 30 days later.”

The highest air drill seeding rate of 236,000 ended up with a 68 percent plant establishment (about 160,000 plants per acre). Success improved with the mid-range target rate (195,000) to 74 percent and to 76 percent at the low rate (seeding 159,000 plants per acre) to about 120,000 established plants per acre. “As the seeding rate dropped, the percentage of the target population went up,” explains Reid. “That’s consistent with Ontario’s research. At high seeding rates, there’s more interplant competition resulting in less plants establishing.”

Planters had more plants established at both high and low population targets compared to air seeders doing solid-seeding. The percentage of plants established with planters ranged from 88 to 91 percent of the target population.
“To establish 160,000 plants per acre, an air seeder requires a target of 236,000. We ended up needing 39,000 more seeds for an air seeder than for a planter. At our medium population, planters required 35,000 fewer seeds,’ Reid says.
In theory, growers using planters rather than air seeders could save themselves an input cost of about 35,000 seeds, or $10 per acre. After planting 3000 to 5000 acres with a good used planter, growers could recover the investment cost.

Pod height
Along with plant population, the project is examining pod height above ground. Pods close to the ground get cut off at harvest. Reid’s research team uses a metre-long two-by-four, placing it on the ground, and counts pods extending below the board’s flat edge, about one-and-five-eighths inches high. Any pods below that level will be lost. Field loss actually increased as field population decreased. “At the high population, with planters and air seeders, the loss was minimal, less than half a bushel an acre,” he says. “At the low population when the stand was thin, the planters lost 0.9 bushels per acre and the air seeded fields had twice the loss, about 1.8 bushels per acre.”

Seeding date, variety, growing conditions and plant populations all have an impact on pod height. The height of the lowest pods is closely related to the height of the first trifoliate node. “It does look like planters might have an advantage over an air seeder, but we need another year with different growing conditions and seeding dates,” says Reid.

A third type of measure, comparing 15-inch and 30-inch row spacing performance, has begun, but that aspect needs more data to determine if there is a yield advantage for the narrower row spacing.

Reid is comfortable with some management advice for growers considering whether to buy a planter for this spring. “If you are growing other row crops like corn or sunflowers, a planter probably is the way to go but you can achieve good yields with any equipment.” Reid says.

Secondly, the research revealed that a number of the co-operators did not have their equipment calibrated properly, or did not use the proper amount of seed to hit their targets. Both under-seeding and over-seeding occurred. “It doesn’t cost you anything to get the right amount of seed on. Spend the time to calibrate things properly, and you’ll save
some money.”

Planters, probably
Performance of a single variety of soybeans with different seeding rates and seeding approaches is being evaluated by Agri Skills of Carman. “The assumption is that a planter will provide the opportunity to reduce seeding rates, and still retain matching yields, but is that true?” VanKoughnet asks. “Five years ago, we didn’t worry much about it. But now with the price of seed, that 20 percent higher seeding rate might buy you a planter.”

The extra-wet seeding conditions in 2010 at the Carman site worked against air seeders more than planters. The planter gave better control of seed placement, he says. Excessive on-row packing pressure also worked against the air seeders.

VanKoughnet’s equipment for the MPGA trials included a vacuum planter with 15-inch row spacing, one air seeder with on-row 10-inch packing and another air seeder with coil packers on eight-inch spacing. He seeded with three rates for each piece of equipment. “Our first indication is that, under the unusual high moisture conditions, the plant survival rate with the planter was significantly better. That ultimately translated into improved yields, though maybe not as great as one might have expected,” he says.

Looking at plant emergence, the planter rows came up like a green picket fence through a single crack that went straight down the seed row; the air drilled part was very patchy with small cracks running every direction and some seedlings struggling to lift chunks of soil.

At harvest, the gap closed more than expected. Yields on the drilled strips were about five to 10 percent less than on the planter rows, and were consistent across the field in all four replicates. For his own personal fields, VanKoughnet says he was convinced about the better method within a week after emergence. At harvest, it was not as obvious. “I was glad that my other fields on my own farm were planted with the planter and not with the air drill. Under the past season’s conditions, there were clearly some advantages to a planter. But, we don’t know whether those differences will be as significant in a normal year. That’s why we do this more than one year.”