The project had its origins back in 2009 when the Growing Forward 1 program identified canola as a research priority because of the great potential for expanding canola production in Eastern Canada. Canadian opportunities were emerging for canola’s use in biodiesel because federal and provincial governments were setting requirements for Canadian diesel fuel to contain a portion of biodiesel. At about the same time, a major oilseed crushing plant was opening near Trois-Rivières, Que., providing a closer buyer for canola growers in Quebec and the Maritimes. And Eastern Canadian crop growers were becoming interested in canola as a higher value alternative to some of the cereal crops commonly grown in their rotations.

“[Good agronomic information is essential to advance adoption of any crop.] And some of the first questions that farmers who are thinking about a new crop alternative would ask are: When should we seed this crop, and at what population density?” says Bao-Luo Ma, a senior research scientist specializing in crop physiology with Agriculture and Agri-Food Canada’s (AAFC) Ottawa Research and Development Centre (RDC).

To answer those two important questions for canola growers in Eastern Canada, Ma initiated the project in 2011. The objectives were to examine the effects of canola seeding date and rate on seed yields, oil yields and other factors, and to develop a model for estimating optimum seeding dates for locations in Eastern Canada.

In 2011 and 2012 at each site, the plot treatments compared early, intermediate, and late seeding dates. The actual seeding dates depended on local weather conditions and site accessibility. At most of the sites, three seeding rates were compared: 2.5, five and 7.5 kilograms per hectare (kg/ha). A fourth seeding rate of 10 kg/ha was included at Guelph. At all the sites, the experiments used the same canola hybrid: InVigor 5440.

The model was developed using the data collected in 2011 and 2012. Then Ma led a two-year field experiment at Ottawa RDC in 2013 and 2014 to collect additional data for verifying the model. This experiment compared four seeding dates and three seeding rates.

Key results
“The number one finding from this project is that optimum seeding date is important for optimizing yields and it is site-specific,” Ma says. Based on the project’s data, the optimum canola seeding dates are: Ottawa, April 24; Guelph, April 26; Sainte-Anne-de-Bellevue, April 26; Canning, April 29; Saint-Augustin-de-Desmaures, May 11; and Harrington, May 25.

At Harrington, it was because of the cold spring weather. (No optimum seeding date was determined for Fredericton because of field inaccessibility issues.)

“The timely or optimum seeding date of a crop is very critical because you want to maximize utilization of the natural resources like light, water and temperature,” Ma explains.

“If you plant too early, the crop will face cold stress and may take much longer to germinate and emerge, and the seedlings will be weaker and more vulnerable to attacks by insects like flea beetles.” So for optimum crop growth, growing conditions following seeding of canola need to be warm enough to promote good stand establishment.

However, if you seed too late, canola yields and quality may be reduced. Ma says, “Canola is a cool-season crop. When growing canola in Eastern Canada, you may have the risk of very high temperatures and sometimes drought stress at flowering time. For the flowering canola crop this is very critical. Temperatures above 29 C will cause flower abortion, there will be not enough pollen for pollination, and yields will be lower.” Earlier seeding gives the crop a better chance of avoiding heat and drought stress during flowering.

Ma notes earlier seeding also tends to give the plant more time for foliage development, resulting in more branches, more pods and heavier seeds.
As well, research has shown early seeding tends to result in higher oil content in canola seed. “So even in a year when the yield is no different whether you seed one week or two weeks earlier or later, the chances are you will get a higher seed oil concentration in the early-seeded canola compared to the later-seeded canola,” he explains.

The field experiments showed some exceptions to this general rule about higher oil levels with early seeding, Ma says. “For example, in one year at [Sainte-Anne-de-Bellevue], later seeding sometimes resulted in higher seed oil concentrations than early seeding. We think that was because in that particular year, the early-seeded plots suffered greatly from flea beetle damage.” The flea beetles damaged the main growing point on some canola plants. Some of those plants were able to eventually recover and produce additional branches. “The seeds on these later branches matured later than the seeds on the main stem of the later-planted crop. So in that particular environment, early seeding did not produce seeds with a higher oil concentration.”

The project’s other key finding is that a seeding rate of about five kg/ha is optimum for most situations in Eastern Canada.

The results showed raising the seeding rate from 2.5 to five kg/ha usually increased the seed yield for early-seeded canola. However, further seeding rate increases above five kg/ha did not increase yield.

Canola can usually reach its yield potential with a range of seeding rates because the plants will compensate for differing seeding rates by changing the number of branches and number of seeds they produce. However, very low and very high seeding rates are not recommended.

“If you plant too many seeds that will not be economic [because of the seed costs for the producer] and because the plants will compensate by producing fewer branches and fewer seeds,” Ma
explains.

“On the other hand, if the seeding rate is too low, [the crop yield] will suffer due to insufficient plant density.” And even if the crop is able to produce enough extra branches and seeds to compensate for a very low seeding rate, the extra seeds set on the branches may not be ready for harvest at the same time as the seeds on the main stems of the plants.

However, Ma notes that if growers are seeding canola during cold conditions, a slightly higher seeding rate would tend to provide better yields. In that situation, the higher rate can help compensate for the poorer germination and emergence, and weaker seedlings that can result from the cold seedbed.

Canola growers in Eastern Canada can use the seeding date for the location in Ma’s study that is closest to their own farm or use Ma’s equation to estimate their optimum seeding date, and then seed at a rate of about five kg/ha. 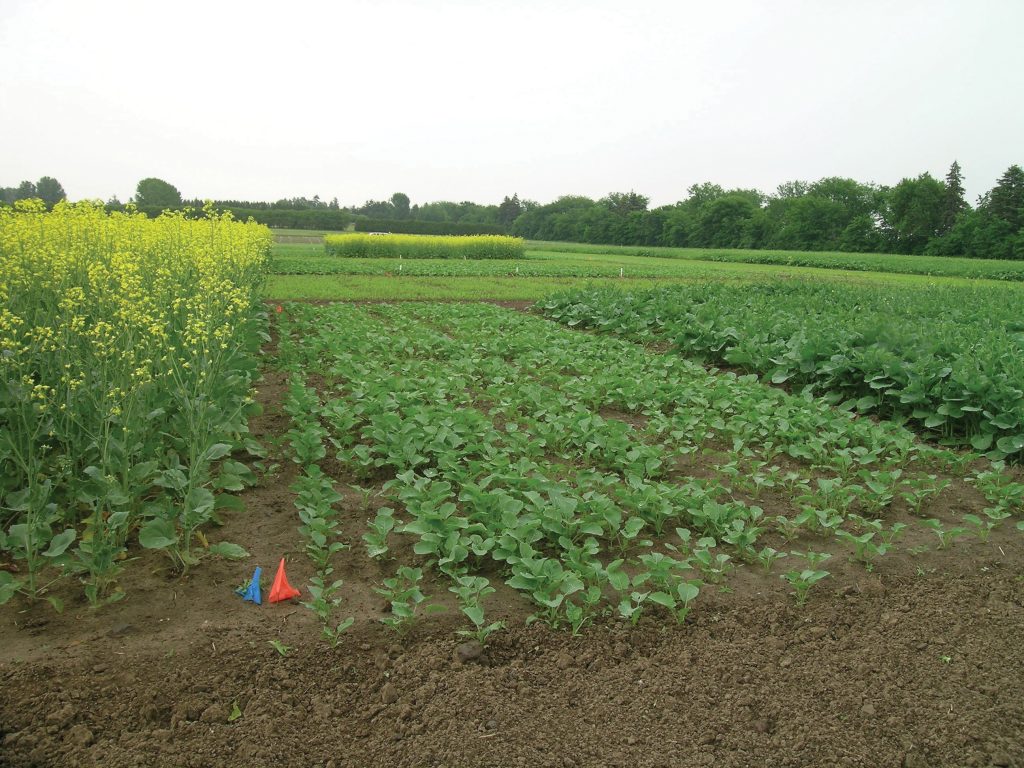