Crop rotations that include legume forages in rotation provide economic and environmental benefits to subsequent crops. Previous research and producer experience has found improved nitrogen (N) benefits, increased yields and other rotational benefits in these cropping systems. Producers also benefit from including forages in rotation to break pest, disease and weed cycles and other cropping problems.

In a recent project, researchers were interested in finding out if short-rotation legume forages (three or four years) could provide crop producers with an alternative cash crop such as hay or silage, and provide residual N benefits to subsequent cereal crops. This residual N could significantly reduce N fertilizer requirements and save producers money. Researchers wanted to determine the economic returns and measure the N benefits being realized from these rotations.

A four-year project was initiated in 2010 in Saskatchewan at four locations: Swift Current, Lanigan, Saskatoon and Melfort. “The objective of this project was to determine the amount of residual N from a two-year crop of alfalfa or red clover in a four-year rotation,” explains Dr. Paul Jefferson, vice president operations at the Western Beef Development Centre (WBDC) in Humboldt, Sask. The rotations included alfalfa-alfalfa-wheat-canola, red clover-red clover-wheat-canola, barley-pea-wheat-canola and a control barley-flax-wheat-canola.

The four rotations were seeded in 2010 in replicated plots at each of the four locations. The annual crops were harvested for grain, and perennial forages were harvested in the seeding year for hay yield and again in 2011 for hay and then terminated with herbicides. In 2011, a pea crop was included in the barley-pea-wheat-canola rotation to provide a comparison of a rotation that included an annual legume crop. In 2012, wheat was grown on all treatments, followed by Liberty Link (L130) canola on all treatments in 2013. The crop yield and N content of the wheat in 2012 and canola in 2013 were measured.

“No N fertilizer was applied to any of the four rotations in any years, except for some subplots in canola in 2013,” explains Jefferson. “We set up N subplots in 2012 in wheat and 2013 in canola at each location to calculate the N response for comparison. The subplots included treatments of zero, 40, 80, 120 and 160 kg of N per hectare. From these subplots, we used a regression analysis to calculate a response to N, which was then used to estimate an N fertilizer equivalent.”

“Strong drought conditions in 2012 at the Swift Current site impacted the N response in wheat in 2012, followed by little response in canola in 2013 except for the alfalfa rotation,” says Jefferson. “The results were consistent with earlier work we did in the early 2000s at Swift Current on perennial alfalfa-grass mixtures that were removed and planted to barley. The N benefit in the second year after removal was usually stronger than in the first year, which we determined to be related to water limitations. Therefore, the Brown soil zone may be limited in the use of these rotations because of dry soils or dry conditions in the first year after removing forages.”

The legume forages grown in the first two years of rotation produced high yielding, good quality hay harvests. At the Lanigan site, a seedling year harvest was done in 2010, and in 2011 three cuts were harvested on each plot yielding a total annual harvest of four tonnes per acre with very good quality at 70 per cent total digestible nutrients (TDN). These high-quality hay crops are suitable as an additional component of a wintering ration for a cow-calf operation or backgrounding calves and yearlings.

“We were very pleased with these results; however we are still working on the economics, which will be completed over the next few months in 2014,” says Jefferson. “We are also waiting for some lab analysis results from fall samples for plant N concentrations and soil N analysis. This work is being completed by Dr. Jeff Schoenau’s lab at the University of Saskatchewan. Once we receive the results, our beef economist Kathy Larson will complete the economic analysis so we will be able to put some numbers to the results and the benefits we know are there.”

Producers already recognize the benefits of forages in rotations, but don’t necessarily know how big the benefit is for N. There are examples of local area beef producers renting land from neighbouring crop growers to grow short rotation legume forages for two or three years for hay or silage, and then returning the land back to the neighbour for annual crops. Part of the rental agreement includes a value of the N benefits derived from the forages and returned to the crop growers.

“Our research results are promising and indicate that short rotation legume forages can be a viable option, providing high quality feed, good yields and reasonable levels of residual N two years after legumes in the system,” says Jefferson. “Crop producers can get two years of annual crops after legume forages with either zero or minimal additional N fertilizer, which is a definite advantage at current fertilizer prices. Beef producers can get high quality hay for wintering cattle or backgrounding calves and yearlings from the two years of forages.

“We are looking forward to results of the economic analysis, which will provide some of those numbers needed to measure the N benefits being realized from these rotations,” he adds. “The results could help expand this community-wide integrated system of neighbouring crop and beef producers each taking advantage of and benefiting from these short rotation legume forage systems.”

The project was carried out with the Western Beef Development Centre at Lanigan in collaboration with the Wheatland Conservation Area at Swift Current, the Northeast Agriculture Research Foundation at Melfort and with Dr. Bruce Coulman, at AAFC in Saskatoon. Project funding support was provided through the Agriculture Development Fund, Saskatchewan Ministry of Agriculture. 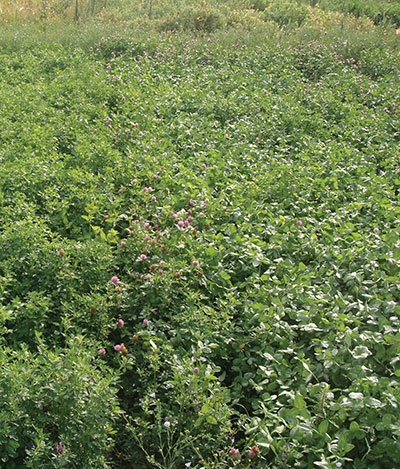