Alberta landowner Kent Lamoureux has learned a lot from converting cropland into a short rotation tree plantation. His goal is to both profit from the natural environment it creates now and later harvest and sell the mature wood fibre for a variety of potential uses such as pulp and paper, solid wood products, bio-energy, bioproducts and firewood.

He has planted his 57 hectares of farmland located along Highway 37 near Gibbons into a hybrid poplar and willow plantation site, with an added research component that involves the Canadian Wood Fibre Centre (CWFC), Canadian Forest Service (CFS) and a provincial research organization called Alberta Innovates Bio Solutions.

Although esthetics and establishing a more bio-diverse environment were key motivations behind Lamoureux’s decision, he has an overall commercial plan for the property. He liked the favourable numbers when comparing woody fibre production on a managed plantation to that in a virgin forest.

“Bush yields eight times less than afforestation, so we’ve really got to think of this as a crop,” says Lamoureux.

At present, he is in the planning stages to establish a permanent, serviced campground on the property, aimed at providing a housing option for workers involved in developing the nearby Alberta Industrial Heartland area. CFS, CWFC and Alberta Innovates Bio Solutions have gained a huge dividend by using the property as a research and demonstration site. Another bonus is its close proximity to Edmonton.

“We see it as a billboard for growing short-rotation woody crops,” says Tim Keddy, wood fibre development specialist with the CWFC. “Being right on the highway, it has good visible tech transfer opportunities for us to demonstrate to people what is happening on the site and what support we can provide.”

Lamoureux says he has benefited significantly from his partnership with the research organizations.

“I’ve learned so much about growing trees,” says Lamoureux. “Growing a stand of poplar sounds nice in principle, but the spraying and maintenance can be a lot of work. You want to minimize what you are doing and maximize the impact of every pass to try to keep things clean.”

Working as an agronomist in the agriculture industry, Lamoureux says he opted for a plantation after conducting extensive research and also determining that his farm operation, which was seeding only 57 hectares of land into a traditional wheat/canola rotation, wasn’t profitable. The soil classification on the site is variable, with 10 percent class 1 soil, 50 percent class 2 and 40 percent class 3.

He started by planting 32 hectares in 2005 as part of the federal government’s short-lived Forest 20/20 program, which was aimed at planting trees to try to sequester carbon as part of Canada’s Kyoto Accord commitments. All told, CFS planted about 1800 hectares across the Prairies as part of this program.

The remaining 25 hectares on the Lamoureux property were planted in 2009 as part of an Alberta Community Development Program initiative administered by the Alberta Forest Research Institute (AFRI), which is now part of Alberta Innovates Bio Solutions.

“Under the AFRI program, we were looking for landowners to buy into the use of their land as part of a network of sites to demonstrate what impact afforestation could have on community development by using biomass for a variety of applications, such as treatment of sludge, creating community heat, and so on,” says Keddy.

The site consists of four hybrid poplar species and four plantation designs. There is the original Forest 20/20 plantation, which has already advanced significantly along its growth cycle and will likely be harvested around 2025, a high-yield afforestation site, a concentrated biomass site, and a hybrid afforestation biomass plantation. Although CFS provides Lamoureux with management advice on the Forest 20/20 site, he is responsible for its maintenance, which basically amounts to vegetation control. CFS provided the infrastructure, planting, knowledge, management and maintenance on the remaining 25 hectares.

“We have research projects out there that include fertility projects linked to soil productivity, carbon exchange research, the impact of carbon dioxide emissions from the site, water usage research, and also biomass volume and growth research,” says Keddy.

Rochester-area landowners Kerri and Dennis Michalczuk have also turned a portion of their land into a hybrid poplar plantation, having signed up for the recently discontinued Alberta Pacific Forest Industries (Al-Pac) hybrid poplar farm program.

They farm part time, rent out some land and also work off the farm. Dennis says he occasionally found it difficult to collect the rent if the renting farmer was experiencing financial difficulty. Both he and his wife liked the idea of a guaranteed rental rate as part of the Al-Pac program. Furthermore, Kerri gained extra income by taking on the four-year mechanical weed control contract on the 60 hectares they agreed to plant into hybrid poplar.

“Planting hybrid poplar is definitely a way for farmers to gain a regular income from farmland that is perhaps marginal and not producing consistently from a conventional agriculture crop,” Dennis says. Fortunately for the Michalczuks, they signed up for the program at the right time, as Al-Pac has decided not to sign up any more plantation partners at the present time.

Al-Pac began partnering with private landowners outside its Forest Management Area (FMA) in 1993 to develop a 10,000-hectare network of poplar farms within 200 kilometres of the mill site near Boyle.

Through 20-year land leases, hybrid poplars are grown to provide the mill with an alternative source of fibre from private land. The company says that hybrid poplars planted in its tree farm program are similar to the trees that have been used as shelterbelts in the region for more than 50 years. These poplar trees can grow six to eight times faster than native aspen, and have root systems that are more easily removed for reclamation. Each 1,200 hectares is anticipated to produce 300,000 to 400,000 cubic metres of wood at harvest.

In 2012, Al-Pac decided to focus on managing poplar farms that are already in the program and those that were planted during the summer of 2012.

“We regularly undertake audits throughout various areas of our company,” says Al-Pac’s vice-president of woodlands, Bob Nichol. “Our recent findings forecast lower fibre requirements for the mill so the additional fibre from plantations will not be required.” 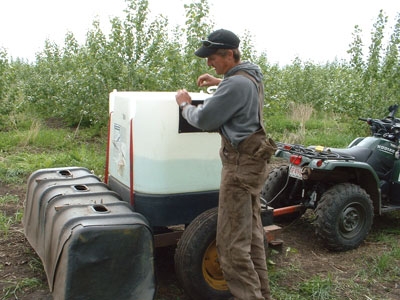