Including legume forages in short rotation in cropping systems can provide advantages and benefits for both crop and beef producers. Research shows that adding legume forages into an annual cropping rotation can be a viable option, providing high quality feed, good yields and reasonable levels of residual soil nitrogen (N) two years after legumes are taken out of a cropping system, providing an alternative way to build soil N. Overall, net returns after four years were higher for those rotations that included forages as compared to standard annual crop rotations.

Over four years from 2010 to 2014, different rotations were compared at four locations across Saskatchewan, including Swift Current, Lanigan, Saskatoon and Melfort. The objective of this collaborative study undertaken by the Western Beef Development Centre (WBDC) and three Agriculture and Agri-Food Canada (AAFC) research stations was to determine the amount of residual N from a two-year crop of alfalfa or red clover in a four-year rotation with wheat and canola. The rotations included: alfalfa-alfalfa-wheat-canola; red clover-red clover-wheat-canola; barley-pea-wheat-canola; and a control barley-flax-wheat-canola. The legume forages were terminated at the end of year two, followed by Unity wheat grown on all treatments in 2012, and Liberty Link (L130) canola on all treatments in 2013, with no additional N fertilizer applied to either crop.

“Overall, the economic analysis showed higher cumulative net returns from the rotations that included two years of legume forages, although the economics varied by location and soil zone,” explains Kathy Larson, beef economist with WBDC in Humboldt, Sask. “The Swift Current site suffered from drought conditions during the four-year project, which impacted the results. As well, the alfalfa rotations resulted in higher net returns for Melfort and Swift Current, while red clover yielded better returns at the Lanigan and Saskatoon sites, emphasizing how different legumes respond to different soil zones and climate conditions across the province.”

In the economic analysis, average crop year prices were used. For 2010, forage was valued at just under $86/MT and barley at $152/MT. In 2011 forage was valued at just under $70/MT, peas at $8.49/bu and flax at $525/MT. For 2012, wheat was valued at $280/MT and canola at $428/MT in 2013. The stored N for use by subsequent crops (wheat and canola) was measured and valued using urea prices reported by the Alberta Farm Input Price Survey from 2009 to 2013, which averaged $0.58/lb, and was calculated as the Nitrogen Fertilizer Equivalent (NFE) value. In year one, the net returns on the legume forages were negative largely due to the establishment costs and typically lower harvest yields. However, after the second year, both alfalfa and red clover were very competitive with positive net returns and after four years, higher net returns than other rotations.

“In the second year, we were able to take multiple cuts on the forage crops without worrying about leaving any carryover, because the forage crops were terminated at the end of year two and seeded to wheat in year three,” says Larson. “The forage legumes provided revenues that exceeded the control rotation at all sites, except Melfort, which experienced exceptional yields on flax.” The flax yield at Melfort was 3456 kg/ha or 55 bu/ac, nearly double the five-year average yield (28.6 bu/ac) in the surrounding rural municipality. If flax yield had been in line with the five-year average, the alfalfa-alfalfa-wheat-canola rotation would have had the highest cumulative net returns at Melfort.

“With the exception of Swift Current, the wheat and canola yields from the plots that grew alfalfa and red clover for two years outyielded the control rotation by 40 per cent on average,” Larson explains. “The amount of nitrogen fixed by the legumes varied by soil zone and climatic conditions with no NFE benefit measurable at the Swift Current site (except with the alfalfa-alfalfa-wheat-canola in year four) due to drought stress.”

The NFE values for alfalfa ranged from $43/ha in Swift Current to a high of $460/ha in Melfort, while the NFE for red clover rotations were higher at Saskatoon ($239/ha) and Lanigan ($300/ha). These differences clearly illustrate that environment and soil zone can impact the amount of nitrogen fixed by the legumes. Taking four-year cumulative net returns and NFE values together, the alfalfa rotation was the highest at Melfort ($2558/ha) and Swift Current ($613/ha); however, the red clover rotation was higher at Saskatoon ($1764/ha) and Lanigan ($1577/ha).

“Overall, the project results show that including short rotation legumes can provide residual soil N for uptake by subsequent annual crops and the net returns are competitive with a typical rotation like the control (barley-flax-wheat-canola),” explains Larson. “The soil zone and climatic conditions have an impact on the yield and the legume’s ability to fix nitrogen.” 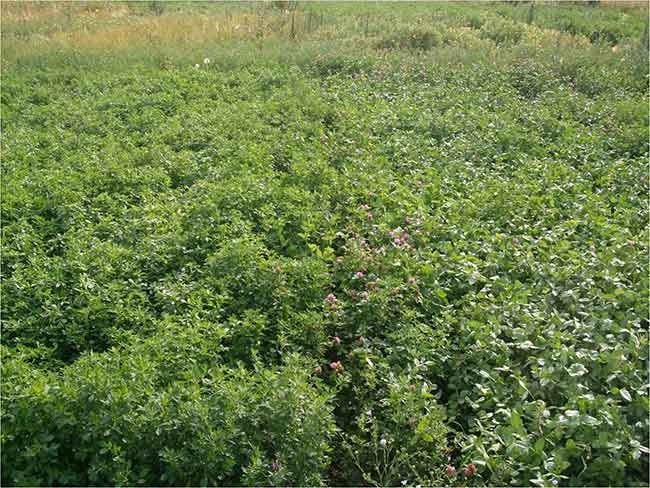 Alfalfa and red clover in rotation in 2011. Including legume forages in short rotation in cropping systems can provide advantages and benefits for both crop and beef producers.