Soil salinity is surprisingly common on the Canadian Prairies, with some estimates indicating about 30 per cent of Prairie agricultural land is either saline or at risk of becoming saline. A key weapon in the battle against this yield-liming soil condition is the Salinity Tolerance Testing Facility.

Since it opened in 1988, this Agriculture and Agri-Food Canada (AAFC) facility has been providing practical results for Prairie farmers – from evaluating the salt tolerance of a wide range of crops, to improving crop recommendations for saline soils, to selecting salt-tolerant breeding lines for better grain and forage varieties.

Salts occur naturally in many of the geologic materials on the Prairies, because, about 100 million years ago, oceans covered much of the region and left behind marine salts. Surface and ground waters can dissolve, carry and deposit those salts. A combination of factors, such as precipitation amounts and subsurface water flow patterns, can cause salts to accumulate in certain areas. High salt concentrations in the root zone hinder the uptake of water and nutrients by plant roots, reducing crop yields.

Severely saline areas have white salt crusts on the soil surface most of the time, with yield reductions of 25 per cent or more. Although moderately to slightly saline areas don’t usually have these salty crusts, crop yields can still be significantly reduced. The degree of impact on a specific crop variety will depend on its salt tolerance.

“The Salinity Tolerance Testing Facility was the original idea of Dr. Harold Steppuhn, a hydrologist who has now retired,” says Ken Wall, a senior technician who worked with Steppuhn for about 30 years at AAFC’s Semiarid Prairie Agricultural Research Centre (SPARC) at Swift Current, Sask., where the testing facility is located.

“Dr. Steppuhn’s objective was to design and fabricate a world-class salt tolerance testing facility primarily for Canadian crops because, historically, many of our crop salinity tolerance recommendations for Canadian agriculture had been extrapolated from studies at the United States Salinity Laboratory in Riverside, California.” Differences in climate, bedrock chemistry, soil characteristics, crop choices and other factors mean that crop responses in salt-affected Prairie lands can differ from those in the United States.

“With the completion of our facility, it became one of only two such facilities in North America. And there are only one or two other ones in the rest of the world. So it’s really a unique facility,” says Wall.

The facility is capable of testing crops at three growth stages: germinating seeds in a growth chamber; seedlings in a screening facility capable of testing hundreds of genetic lines simultaneously; and mature plants in large sand grow-tanks. The temperature-controlled facility is designed to precisely control root-zone moisture, nutrient and salt levels.

The accurate control of salt concentrations makes the facility vital for salinity tolerance research. That’s because such control is almost impossible under field conditions.

“Salinity tolerance testing in a field environment can be complicated by variable soil profile conditions, such as texture and available moisture, nutrients and salt content in the soil. Under extreme conditions, salinity levels in western Canadian soils can vary from slight to very severe within a few metres, making replicated field trials very difficult,” explains Wall. “The level of root-zone salinity also varies with time and changes in the weather. Root-zone salt concentrations increase or decrease in response to the infiltration of water from rainfall or snowmelt and to the loss of soil water by evaporation. So when you do testing in the field, it’s really difficult to know exactly what the plants are facing at any given time.”

Tools for producers
The Salinity Tolerance Testing Facility has achieved many valuable results for producers over the past 26 years. For instance, one of the first tasks of Steppuhn, Wall and others at the facility was to start measuring the salinity tolerance of Prairie crops to provide crop recommendations. Over the years, they have tested many grain crops, such as several classes of wheat including durum and barley, and canola, field pea and several mustards, as well as forage crops, such as alfalfa and various wheatgrasses, and new crops such as camelina.

One of the surprising findings from this work is that canola has fairly good salinity tolerance – better than wheat’s tolerance and similar to barley’s (see Table 1 above). “Compared to barley, canola is a little trickier to establish in saline areas because it is seeded shallower and there is [more fluctuation in salt content] in the top 0.5 to 0.75 inches of the soil profile. With barley you can seed it down to about 1.5 inches, so it’s insulated from some of the salts moving up and down at the surface. But once you get canola established, it is just as tolerant as barley,” notes Wall.

“We also discovered that hybrid canola has more tolerance than conventional canola, and that camelina, although drought-tolerant, is significantly less salt-tolerant than canola.”

A major achievement through research at the facility was Steppuhn’s pivotal work on crop yield response to root-zone salinity. According to Wall, the common thinking back in the 1980s was that soil salinity didn’t really affect a crop’s yield until the salt concentration reached a certain critical level, and then yield declined in a linear fashion as the salt concentration increased above that critical level.

“For several years, we tried to get that response in the different crops we were testing, and we just didn’t find it…. [In fact,] we noticed, even at very slight levels of salinity, there is an effect on yield almost immediately with many of the annual crops that we grow across the Prairies,” says Wall. “Ultimately Dr. Steppuhn discovered that a curvilinear function more accurately described crop response to salinity. This led him to rework many of the results from the U.S. Salinity Lab and to publish two papers that have become the standard in salinity research.”

The Salinity Tolerance Indices calculated with Steppuhn’s equation provide a more accurate assessment of a crop’s salt tolerance. So farmers have a better tool to use when choosing crops suited to the salt levels on their own land.

In recent years, work at the facility has increasingly involved testing of breeding lines to help in developing salt-tolerant varieties. “One example is some recent research with Dr. Surya Acharya, a plant breeder at [AAFC’s] Lethbridge Research Centre. We developed an alfalfa population with superior tolerance through several mass selections and outcrosses with salinity-tolerant selections conducted in the salt lab. As a result of this collaboration, the alfalfa variety Bridgeview was released in 2011,” says Wall. “Also, another new release from Dr. Acharya, called Kehoe, and several American [dormant-type] alfalfa varieties have been tested for salt tolerance in the facility prior to their release in Canada.”

Another important example is the development of AC Saltlander. Wall explains that this salt-tolerant green wheatgrass variety was developed from seed of a natural hybrid originally from Turkey. “Dr. Steppuhn obtained the seed from the Agricultural Research Station at Logan, Utah. We did selections for resistance to root-zone salinity, winter hardiness, uniform plant colour, vegetative vigour, leafiness, seed set and freedom from plant pests. All these tests were conducted at the Salinity Tolerance Testing lab. And in 2006 AC Saltlander was released,” he notes.

“It is one of the most salt-tolerant grasses available, giving producers another valuable tool in economically utilizing some of these salt-affected lands. AC Saltlander is really starting to take off, as farmers are discovering just how salt-tolerant it actually is.”

Looking ahead
Selecting salt-tolerant breeding materials is the facility’s main mandate for the future. “Rather than the plant physiology of salinity, the facility will be more focused on germplasm improvements and better varieties. And with the [DNA] marker technologies that are coming along in plant breeding, it is really going to open up use of that facility so we can make much better selections for salinity tolerance. So the facility will support the work of our breeders and genomic scientists going forward,” says Dr. Paul McCaughey, AAFC’s director of research, development and technology transfer in Saskatchewan.

McCaughey gives a couple of examples of current projects at the facility, which are related to new Prairie crops for semiarid conditions. “One is Camelina sativa, commonly known as camelina. It is an oilseed crop and it is being targeted for industrial purposes. Camelina will probably end up being grown on some more marginal soils, some of which could be affected by salinity.

“The other one is an industrial mustard crop called Brassica carinata; it’s often called Ethiopian mustard. We are likely to see this crop grown in the southern parts of Saskatchewan, outside of the canola-growing areas. It’s going to have many of the advantages that canola has, but it is more tolerant of drier conditions. It will also end up being exposed to saline soils.”

Testing at the facility to evaluate many different lines of these two crops will enable breeders to include salt tolerance along with other agronomic and quality traits, and eventually create improved varieties of camelina and Brassica carinata that are even better suited to tough growing conditions on the Prairies.

For more than two decades, work at the Salinity Tolerance Testing Facility has provided practical results for Prairie producers with salt-affected lands. The facility’s increased focus on development of salt-tolerant varieties is aimed at continuing to provide valuable benefits.

Wall emphasizes the importance of this varietal development work, given the millions of hectares of Prairie agricultural land that are prone to saline conditions. For instance, he says an estimated 10 million hectares have slightly to moderately saline soils or are at risk of becoming saline. “If you can increase the salt-tolerance of crops like camelina, wheat or canola, to increase the yields in slightly to moderately saline areas even by four per cent, it’s easy to see the economic advantage that would have for Prairie growers.” 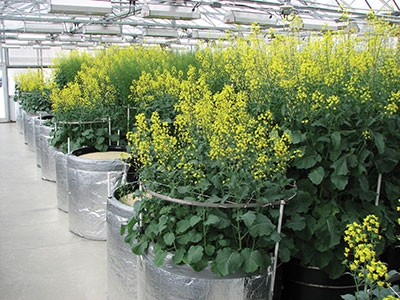 Camelina and canola are grown under different salinity concentrations in the large grow tanks at AAFC’s facility to assess their salinity tolerance. Soil salinity is surprisingly common on the Canadian Prairies.