Encouraged by recent discoveries and increased interest, scientists are focusing more on the idea of developing crops that can get their own nitrogen fertilizer. 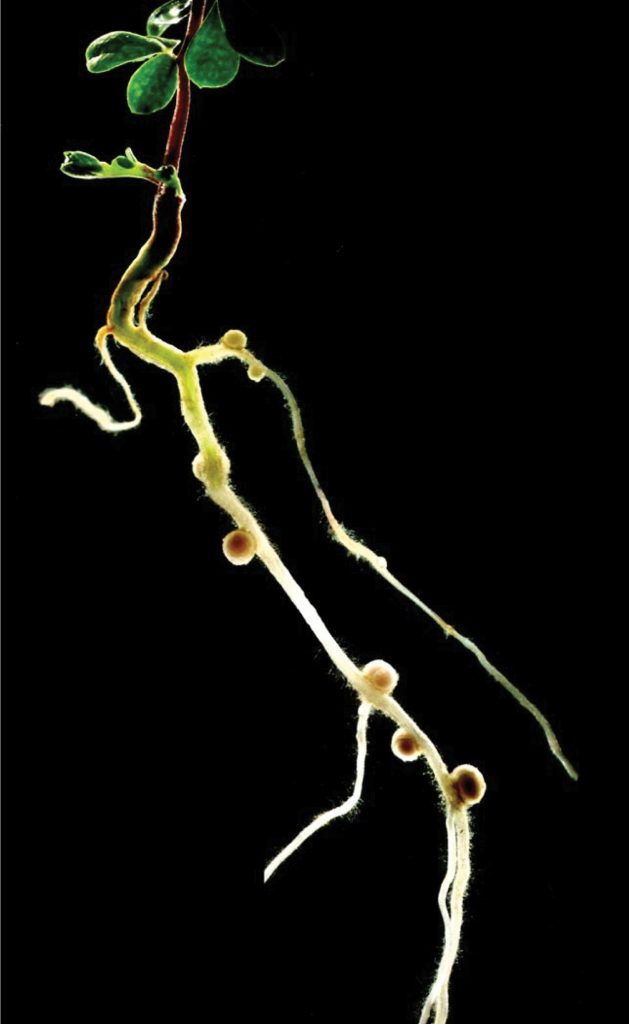 Dr. Krzysztof Szczyglowski, an Agriculture and Agri-Food Canada research scientist at the Southern Crop Protection and Food Research Centre in London, Ont., is part of the global effort to optimize the growth of crops while reducing the use of synthetic fertilizers.

Szczyglowski’s lab is generating more knowledge about nitrogen-fixing symbioses of legume plants. While it still may be years away, he believes the research could lead to breeding varieties of cereal crops, like corn and wheat, that would have enhanced abilities to acquire nitrogen.

A first step is to gain a better understanding of the legumes.

“Legumes can take advantage of the atmospheric nitrogen as a source of natural fertilizer to support their growth and productivity while other plants can’t,” he says. “And the ability of those plants is due to their symbiotic or beneficial interaction with naturally occurring bacteria in the soil.”

Szczyglowski’s research focuses on understanding how this beneficial relationship develops. One of the main aspects is to learn why these specific soil bacteria can enter the root and why the plant then builds nodules. He likens the process to building an apartment complex.

“If we fully understand that process, then perhaps we are going to answer the question: Can we breed new varieties of crop plants, mainly cereals, which would be better prepared or provide their own food, so to speak?” says Szczyglowski.

While scientists have studied the relationship between nitrogen-fixing bacteria and plants for more than 100 years, Szczyglowski predicts there will be some exciting results in the next 10 to 20 years.

Part of the optimism stems from a discovery about the genetic composition of the cereal crop plants.

Szczyglowski says most researchers thought legumes had gained something novel related to their nitrogen-fixing ability through evolution and that the non-legumes did not have this capability. But the modern tools of genetics and genome research have revealed that the “backbone” for nitrogen-fixing symbiosis already exists in most plants, including cereal crops.

“That was probably one of the most important discoveries because that told us that something has been tweaked in legume plants in order to make that process viable,” he says.

One of the next steps is to learn how to tweak the machinery in other plants to activate the signalling for nitrogen-fixing symbiosis.

Szczyglowski’s lab contributed to the discoveries of many genes that are essential for this symbiosis in legumes. An exciting contribution was identifying a key gene in the plant genome that is related to the process of forming the root nodules.

“The gene, when stimulated, allows the legume plant to build the root nodule,” says Szczyglowski. “Why (non-legume) crop plants can’t build root nodules is the question.”

As all organisms are built to protect themselves from invaders, another important part of the research focuses on why legume plants allow the beneficial bacteria to enter their roots while keeping other bacteria outside. Szczyglowski says understanding that process will be critical when it comes to finding ways to breed new varieties that will be better prepared to acquire and use nutrients.

“In people’s minds, that only means we’re going to have to use genetic engineering to do this,” he says, adding he believes conventional breeding could accomplish the goal. “Again, our research indicates the genetic composition in the crop plant is already there. And that perhaps the breeding with the proper variants of the genes may be sufficient.”

Should the research fail to produce new varieties of nitrogen-fixing cereal crops, Szczyglowski says the process of learning about how plants interact with beneficial organisms can provide other benefits.

“It will allow us to adjust production schemes to take advantage of what already exists in the soil,” notes Szczyglowski. “I think the industrial fertilizer companies would be really interested in the formulation of a fertilizer that doesn’t leak into the water or atmosphere, stays longer in the soil and is better absorbed by the plants.”

In addition, the knowledge also could be used to answer questions related to fertilizer application methods and timing if the growth of the roots can be modified to scavenge nitrogen.

As global demand for food continues to increase, Szczyglowski says, finding these answers could have a significant impact on two areas.

“In the industrial countries, we have to reduce the nutrient enrichment in the environment by limiting or more targeted use of fertilizers, and in poorer countries we have to provide alternatives,” notes Szczyglowski, adding that productivity in the underdeveloped countries is poor, due in part to expensive fertilizer. “If you could provide them with varieties of plants which are better prepared to scavenge for limited nutrients, you could increase the productivity there by a large margin.”