Chore is a word that gets thrown around often on the farm but few tasks are as unanimously unpalatable among farmers as field scouting. Armed with the right tricks and tips, however, an improved scouting strategy offers many farms a significant opportunity to recapture value. 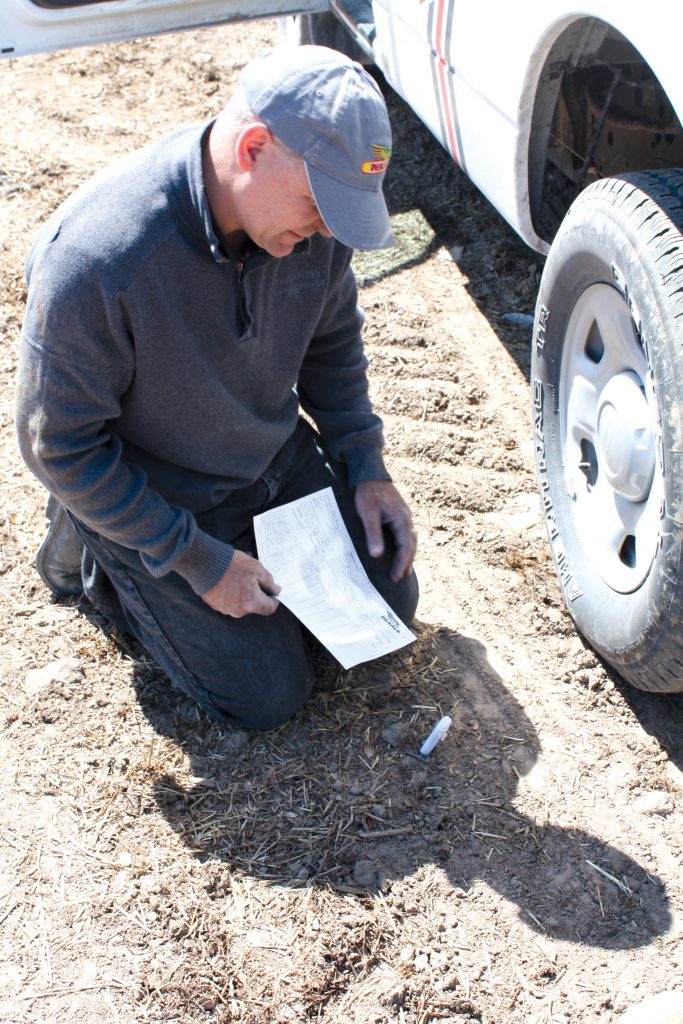 Technology is changing the way scouting data is managed Chore is a word that gets thrown around often on the farm but few tasks are as unanimously unpalatable among farmers as field scouting.

Maintaining intuitive knowledge of fields was easy when the family farm was no more than 100 acres, but on larger acreages gathering this knowledge is a daunting task few farmers do well. Yet independent agronomists like Ed Hanson, based in Durham County, Ont., manage to service thousands of acres.

Though most of the work he does for farmers relates to fertility, Hanson is becoming more recognized for his field scouting services. His strategy is to focus on scouting plants at critical stages of growth that he thinks are most likely to influence yield and quality. Difficult as it is to make scouting a priority at the time, Hanson believes that the most important time to be walking fields is immediately following emergence.

“Sometimes there are in-season decisions to be made but for the most part, we just document what’s going on so that we can address them moving forward with a proactive strategy rather than a reactive strategy,” says Hanson. “Getting caught up in reactive actions sometimes means the damage is already done.”

By looking ahead of problems, Hanson has eliminated emergency spray applications completely for some clients. Field histories that indicate high risks for a particular pest receive preventive measures when conditions are right, and that’s how he earns his keep. Knowing how much money it can save, Hanson is bewildered that farmers who claim scouting is their least favourite job to do don’t just employ someone else to do it.

“Guys will spend a lot of money on iron but they don’t see the value in spending $5 per acre on scouting,” he says. “It’s a tremendous opportunity for improvement and it’s coming around but I really think it’s going to separate the good managers from the rest.”

In Huron County, Joanna Wallace dairy farms together with her husband. She’s been working in ag retail and agronomy since 1999, scouting a large number of acres for other farms every year and putting her skills to use on her own farm as well. If any of her fields are going to suffer from a lack of attention though, she admits they’re usually her own, which is why she would agree that hiring the problem out is likely the best way to address scouting.

“I think if you’re doing it yourself, you just have to be prepared that things may slip by,” she says. Wallace makes scouting a priority by including it as part of her overall crop strategy immediately at the beginning of every new calendar year. Through the winter, both she and Hanson spend a great deal of time reviewing the previous year’s records, not only to get the appropriate inputs ordered, but also to create watch lists for each field. “I’m planning the fertilizer and chemical for the year but I’m also looking at soil samples and weed history, jotting down notes on what symptoms of deficiencies or weed patches I need to be looking for when I’m scouting,” says Wallace. “Yes, there’re always last minute changes in the spring, but most of those weeds that are going to emerge aren’t going to change.”

In her experience, committing to a scouting program is the toughest in the early years but becomes easier as the eye becomes more trained and hot spot patterns emerge more quickly, not only in subsequent years, but even during the first season. At bare minimum, she recommends having a trowel in hand while scouting in the field and also suggests being prepared with a field history, a good weed identification book, and the Ontario Ministry of Agriculture and Food (OMAF)’s Agronomy Guide for Field Crops (Pub 811) and Guide to Weed Control (Pub 75). These guides outline a number of key scouting practices – including proper net sweep protocols, which path to take through the field in order to find certain pests – and offer thresholds to help determine next steps for the farm manager. But the most important piece of advice Wallace can offer to farmers who want to scout their own land is to be sure to always check the back of every field. She four-wheels to the farthest parts of a field when she’s scouting, which she admits increases the risk of rushing over a field too fast if she’s not careful, but walking the whole field comes with a greater risk of seeing too little.

Tricks of the trade
“Smartphones and iPads have been great tools for collecting data, and honestly, without the technology that we have today, we wouldn’t be able to do what we do,” Hanson admits. “It immensely simplifies our job and allows us to communicate a lot more effectively.”

Technology is changing the scouting business, especially when it comes to managing data. Though Wallace is still looking for the right program, Hanson is happily working with John Deere’s Apex program. Ian McDonald, OMAF’s field crops applied research co-ordinator, also likes Scout Doc from AgNition, and, though he’s not really familiar with it yet, he likes the look of iCropTrak by Cogent3D. But he reminds farmers that these programs aren’t compatible with every mobile device out there and that poses challenges when it comes to keeping up-to-date records.

“Some of these work only on smartphones, some only on tablets, some do both,” he says. “The tools you are using have to be user-friendly and I think that is going to be critical in the future that you don’t have the data islanded on a device.”

McDonald envisions a future where cloud-based apps sync smartphones, tablets, and desktop computers with GPS mapping from precision ag equipment or even Unmanned Aerial Vehicles (UAVs). UAV technology, as it could apply to agriculture, is still in its infancy so the equipment remains overly complicated to operate for most farmers; however, McDonald is confident this will improve. Sensory equipment will also need fine-tuning, if only to determine which of the many camera technologies that are available may be best suited to monitor field crops at first. McDonald notes that near-infrared cameras have proven effective at identifying areas of stress in a field but he’s even more excited about the potential of thermal cameras to identify plant stress even before visual symptoms appear.

“The ability of those things to find hot spots, so you don’t have to scout the whole field, is phenomenal,” says McDonald, but he soberly adds that applying this technology is still very much a work in progress. Even at the advanced level, he says, the technology still can’t entirely replace the value in going out to check fields. “Apps don’t overcome the fact that you physically have to be out there, walking the fields, stooping over, turning the leaves over, and doing counts.”


Related
Clubroot in Manitoba and scouting canola
Scouting your fields – what you should know
Scouting taking on a newer, higher profile
Blackleg control strategies