Legume crops are unique in that they can fix much of their own nitrogen (N) requirements from the air to reduce or eliminate the need for N fertilizer. Legume crops include, alfalfa, clover, soybean, dry pea, bean, lentil, fababean and chickpea. 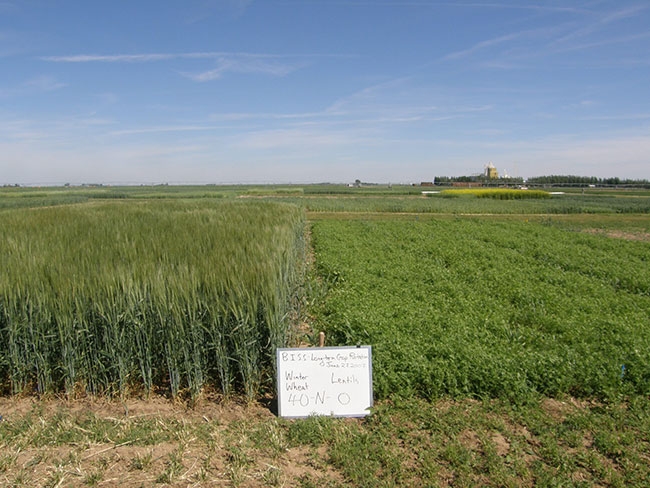 Legume crops form a relationship with living bacteria called rhizobium. Rhizobia bacteria live in association with legume plant roots to convert N from the air into useable N for the plant.

The atmosphere contains about 79 per cent nitrogen gas. Atmospheric nitrogen gas (N2) exists as two N atoms with very stable bonds that are not easily broken. As a result, N2 is relatively unreactive and not available for uptake by most plants, except for legumes.

Understanding biological nitrogen fixation
Biological N fixation transforms atmospheric N2 gas into plant available N forms by N-fixing bacteria. These bacteria are a broad group of single-celled organisms capable of fixing N by producing nitrogenase, an enzyme that catalyzes the reaction that breaks the strongly bonded N2 gas into ammonia-N (NH3). Nitrogen fixing bacteria can occur as free-living microbes in soil, or as bacteria that live in association with legume plant roots. The N-fixing rhizobia bacteria that live in association with plant roots form nodules on legume roots.

Rhizobia can live freely in soil for several years, without a legume host plant. When free-living in soil, they survive on dead or decaying organic matter. Introduced rhizobia that survive in soil often gradually lose the ability to fix higher levels of N. As a result, for effective N-fixation to take place, legume crops should always be inoculated.

The process is very complex, but simply explained, plant root hairs release specific substances called flavonoids, which are used to attract specific rhizobia. Each legume type secretes a different type of flavonoid, therefore only certain rhizobia respond to specific flavonoids. The rhizobia bacterial use flagella, a tail-like structure, to move in the soil solution toward the plant root hairs secreting the specific flavonoid. Movement is limited to a couple of millimetres in the soil. When a plant root is encountered, rhizobia attach to the surface of the root.

Inoculation of specific rhizobia on the legume seed results in nodules clustered near the vicinity of seed placement. When legumes are inoculated with rhizobia bacteria, placement on or very near the seed is essential to ensure contact between the inoculant and legume root hairs.

The root rhizosphere is the zone of soil immediately adjacent to the plant root, that is influenced by root activity. Roots take up nutrients like phosphorus and potassium from this zone. Roots also release nutrient rich exudates into the rhizosphere, which are an excellent source of nutrients for soil microbes including rhizobia bacteria. The abundant nutrition in the rhizosphere promotes rapid multiplication of the bacteria.

Scientists have done extensive work over the past 50 years to develop an understanding of the nodulation processes, to isolate the most effective strains of rhizobia bacteria and develop these strains into commercial inoculants to optimize N fixation.

Types and effectiveness of inoculants
An inoculant contains live bacteria that is placed on the seed surface or very near the seed. When purchasing inoculant, always check to ensure it is the correct rhizobium species for the crop being grown and check the expiry date on the inoculant container. After purchasing inoculant, make sure it is stored in a cool, dark environment to maintain the viability of the live bacteria in the inoculant. Always apply the inoculant according to the manufacturer specifications to ensure correct application and rates. Never mix inoculant with fertilizer as this often kills the bacteria.

There are three main types of inoculants:

Powdered – Fine peat containing rhizobia at a specific number per gram, applied directly to the seed. A sticker is usually needed to ensure rhizobia adhere to the seed coat.

Liquid – Contains the rhizobium in a buffered liquid, that is normally applied directly to the seed usually at the time of auguring and is held in place using a sticker. Some liquid inoculants are registered for use in a seed row application. Check label for correct application instructions.

Granular – Small, peat-based or clay based granules contain the rhizobium in a protective environment; the granular product can be accurately metered into the seed row. A separate tank and meter is required on the seeder.

Depending on soil environmental conditions, it takes three-to-five weeks after seeding for bacteria to infect plant roots, form nodules and start fixing N. The effectiveness of the inoculation process can be assessed by simply digging up and examining the plant roots for the number, size, colour and distribution of the nodules.

Nodules on roots close to the original location of the inoculant that are red or pink inside indicate the bacteria are functioning and fixing N. Nodules are likely not fixing N when the inside appears white, grey or greenish. Nodules distributed through the root system may indicate that native soil bacteria have also infected the roots. These bacteria may not function effectively in fixing N to meet plant requirements.

Legume plants that have limited nodulation will often have lower yield potential. A rescue, in-crop application of N fertilizer may be needed to ensure a reasonable crop yield.

Legume crops are great to include in a diverse crop rotation. The need for costly N fertilizer is reduced or often eliminated for a legume. To take advantage of the N-fixing ability of legumes, it is important to use the correct rhizobium bacteria and follow proper inoculation recommendations. The N-fixing benefits of a legume often persist for a year or two after the crop is grown. As roots and nodules breakdown, N is mineralized to benefit subsequent crops.