If the dry bean disease returns, be ready to manage it. 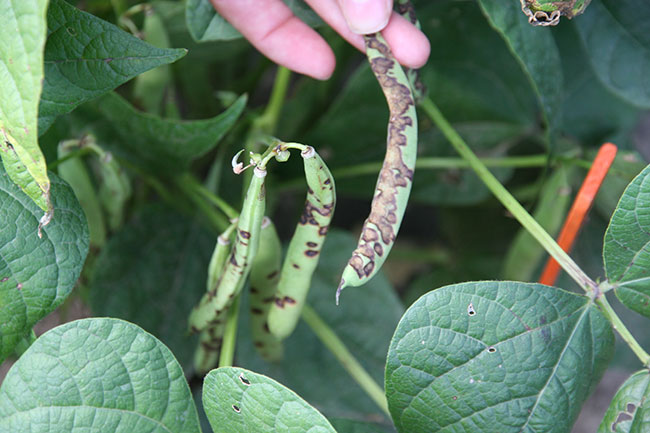 Dry bean anthracnose has kept a low profile over the past decade, but it’s due for a reappearance. If the disease happens to rear its ugly head in 2020 or 2021, new management strategies have emerged from research conducted in Ontario and Manitoba to help you control it.

“It was the number one disease of beans when I came to Morden about 19 years ago,” says Robert Conner, pulse crop plant pathologist with Agriculture and Agri-Food Canada (AAFC) at the Morden Research and Development Centre in Manitoba. “We were finding it in most of the bean fields that were being grown at the time. Now, we probably haven’t detected it in over six years.”

Chris Gillard is an associate professor in the Department of Plant Agriculture at the University of Guelph’s Ridgetown campus, whose research focuses on pest management in Ontario dry bean. Years ago, Gillard had similar encounters with dry bean anthracnose.

“I’m happy to say we haven’t had a good outbreak of anthracnose in 10 years. I’ve been doing this job for close to 30 years, and the first 20 years, it was rough,” Gillard says. “We’d get a good outbreak every six to nine years, and it was impacting a good percentage of the crop – like 10 to 15 per cent of the crop. I walked through fields where we had 50 to 60 per cent yield loss, and what was left was so badly damaged – from visible damage on the seed – that it was unmarketable.”

Their new research confirms that clean seed, tillage and crop rotation are the basis of integrated control of bean anthracnose, providing an update to research from the 1980s.

More than 10 years ago, the two recognized that dry bean growers in Manitoba and Ontario needed help managing anthracnose. The fungus that causes it, Colletotrichum lindemuthianum, wasn’t well understood.

Gillard and Conner say at that time, the length of time the fungus could survive on crop debris and the effectiveness of crop rotation to control the disease were uncertain. Now, their studies provide management guidelines for effective control.

They collaborated in a series of three two-year studies, monitoring the survival of the fungus on crop debris at the Huron Research Station (operated by the University of Guelph’s Ridgetown campus) near Exeter, Ont., and at an AAFC field site near Morden. They began in October 2008, repeating the study in 2010 and again in 2016.

Conner also did a three-year replicated trial in Morden, Man. to test the effectiveness of managing anthracnose with a no-till crop rotation. That trial began in 2006 and was completed in 2010, but wasn’t reported.

The full set of findings, including the research from a decade ago, was released after the third two-year study was completed in 2017. The team led by Conner and Gillard published the results in the Canadian Journal of Plant Pathology in January 2019.

The research took a long time, but the approach was simple and the results are quite clear. What they learned is that, essentially, anthracnose is relatively easy to manage. In fact, this may be the reason the disease has “vanished” from field reports for the past six to 10 years.

For background information, anthracnose on beans is distinct from the anthracnose that infects lentils. The fungus survives on seed, crop debris and stubble, and fababeans are the only other host crop. Spores are airborne, so survival in soil isn’t an issue. Spore production and infection need warm weather and high humidity. Past research indicates epidemics of dry bean anthracnose are brought on by frequent showers, especially accompanied by driving winds.

Symptoms begin with darkening and collapse of veins on the underside of leaves. The infection progresses to dark brown, sunken lesions on the stems and pods, from which spores emerge. The seed also becomes discoloured. In wet weather, rain splash can produce secondary infections.

Before this research began, there was disagreement on the length of time the anthracnose fungus could survive on infected crop debris. There was also disagreement as to the effectiveness of crop rotation in controlling the disease under different climate conditions.

To develop reliable results and settle the disputes, Conner and Gillard set up one study for survival of the fungus on crop debris and a second study (at Morden) for survival of the fungus on zero-till plots under different crop rotations. In the two growing regions, they were dealing with essentially the same variety of fungus and similar soil types.

Weather conditions at the two locations varied considerably over the years of the studies. In general, Morden was consistently much colder and drier than the Exeter region.

Study design
To evaluate survival on crop debris, they gathered infected plant material, which was separated into stem pieces, pod halves and seed. Stem pieces were trimmed to 10 centimetres (cm) in length; pods were opened and separated.

Weighed samples for pods, stems and seeds were separated into 32 mesh bags made from nylon mosquito netting. The sample bags were either placed on the soil surface (pinned with bamboo stakes) or buried 15 cm below the surface in plastic pots. The treatments were replicated four times.

The samples were placed in the two fields in October, then were left to endure the elements for two years. At eight specific dates spaced in three-month intervals, four samples of each tissue type were retrieved, dried and sent to Conner’s lab in Morden for anthracnose evaluation.

This entire two-year cycle then was repeated twice to ensure the results.

Bean pods infected with anthracnose, showing the progression of the disease. Photos courtesy of Chris Gillard.

Symptoms of dry bean anthracnose begin with darkening and collapse of veins on the underside of leaves.

Conclusions
On average, C. lindemuthianum could persist for 18 months in Morden and about nine months in Exeter, long enough to serve as a source of primary infection for subsequent dry bean crops. It overwintered longer on infected stems and pods than it did on bean seed. Burial of infected tissue reduced the viability.

The trials with infected debris in mesh sacks provided clear answers. “We tried to determine if we could have any viable disease left on that tissue when we pulled it out of the ground,” Gillard says. “The bottom line was, the fungus persisted for 18 months at Morden, nine months at Exeter. We never got samples to go past nine months at Exeter.”

The difference between anthracnose and a typical bean disease like white mould is that the latter packs the spores into seed-like bodies called sclerotia. Inside the protective sclerotia, white mould can survive winter conditions and attacks from pathogens in the soil.

“Anthracnose doesn’t have that special overwintering structure – it only survives on bean tissue. As that tissue is broken down and incorporated back into the soil, the disease spores get broken down. The more moisture you have, the faster the residue breaks down and the faster the disease disappears,” Gillard says.

The slower the decomposition, the longer the anthracnose fungus can survive.

“We learned it survives quite a bit longer on the soil surface than when it is buried. That makes sense – buried tissue decomposes faster. When we buried residue, the disease didn’t last as long as it did when we left it on the surface.

“As for the type of residue, the stems and pods decomposed slower than the seed. So, the disease lasted longer on the stem and pod tissue than it did on seed,” Gillard says.

Zero-till rotation study
The zero-till crop rotation study confirmed that if infected debris stays on the surface, the fungus can survive long enough to infect a new bean crop two years after the original infection and can lead to considerable downgrading, Conner says.

The rotation study was on zero-till plots more than 200 metres from the closest bean crop. Continuing in no-till, the field was put into three different three-year cropping sequences: bean/wheat/bean, bean/fallow/bean and bean/bean/bean.

Anthracnose-infected pinto bean seed was planted throughout the entire site in the first year. Irrigation established uniformly infected symptoms throughout the field, and the infected straw remained on the field after harvest in early August.

In 2007, the field was split into four randomized replications of the three rotations, including spring wheat, disease-free navy bean seed and a summer fallow treatment.

In 2008, disease-free navy bean seed was planted across the entire site in Morden. During the growing season, data on anthracnose incidence and severity was collected from all the plots. Harvested bean seed was also assessed for anthracnose.

Anthracnose was severe in the continuous dry-bean plots, and was much lower – but still damaging to quality and yield – in the plots that had been left fallow or in wheat production.

Recommendations
“Clean seed has kept us free of anthracnose since 2008,” Gillard says. “The industry really came together after we last had an outbreak in 2008, really focused on high quality seed, and then on treating that seed with repeated fungicide applications to keep it clean.”

But, he adds, anthracnose comes along roughly once every 10 years, so it is due again. If we can keep it from getting into a field through the seed, we can bring the disease risk to almost zero. However, once we do get it in a field, we’ve got to be able to manage it.

Foliar diseases like anthracnose do quite well in Ontario due to the humid climate and warm growing seasons; scouting is the only way to find them. There are good fungicides available for short-term control, but by then the field is probably infested.

“If you get anthracnose in a crop, you ask how to make sure it doesn’t affect a future crop in the same field. That’s where this study comes in. How do I stop from repeating the problem? You can’t just sit there and say, ‘It’s never going to happen again.’ Someday growers will need this tool. We’ll be able to pull it out and say, ‘Here’s what you need to do and this is why.’”

Using clean, disease-free seed is the best long-term way to control this disease, Conner says. He credits bean producers and seed growers for getting the disease under control about 10 years ago. They used disease-free bean seed, scouted their fields and then proactively sprayed once or twice in the growing season.

“After two or three years of that, it became very difficult to find any fields in Manitoba where anthracnose was a problem. I certainly give the bean producers and seed growers in Manitoba a lot of credit for getting that disease under control,” Conner says.