Dry beans have been grown in Ontario for decades as a successful niche crop. While production has been moving to other parts of country like southern Manitoba, the province still accounts for close to half of Canada’s annual dry bean crop. 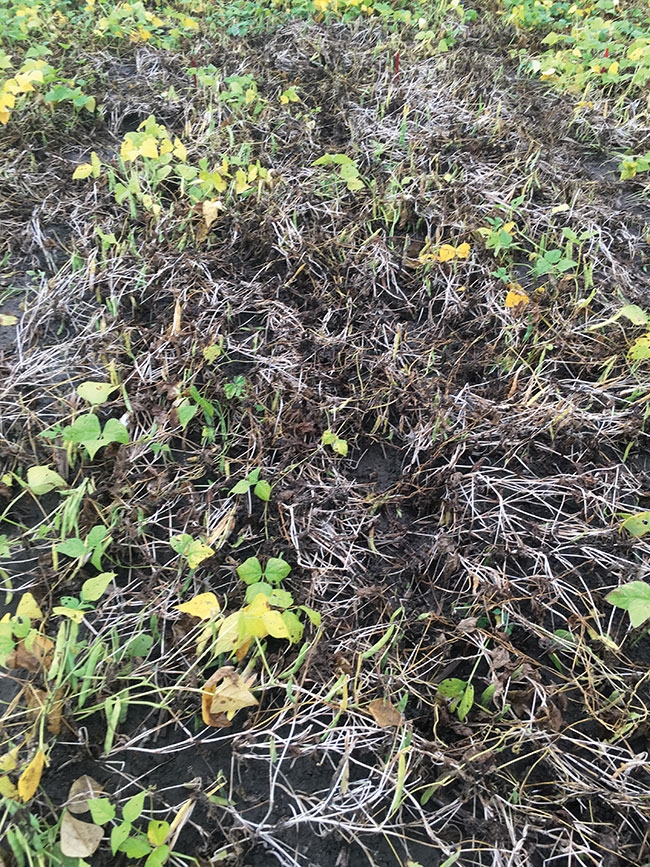 White mould damage in dry beans. Dry beans have been grown in Ontario for decades

Chris Gillard is an associate professor in dry bean agronomy and pest management at Ontario’s University of Guelph Ridgetown campus and has been studying the crop for 26 years. He describes dry beans as a “high-value, high-management crop” that growers usually aren’t afraid to spend money on in order to optimize returns that can run as high as $1,000 an acre.

“It’s great to work with in a lot of ways, but there are problems to deal with,” Gillard says. “You’ve got to manage it at a higher level to get a good crop.”

Gillard and Meghan Moran, a canola and edible bean specialist with the Ontario Ministry of Agriculture, Food and Rural Affairs, teamed up to provide some valuable production advice for dry bean growers at the Southwest Agricultural Conference held at the University of Guelph last January. They share some of their top tips.

“I think it’s important to always look at what’s available and to try new varieties,” Gillard says. “I think particularly in dry beans, because they tend to be quite sensitive to stresses, it’s important to have one or two good reliable varieties and then spread your acres over other varieties so you’re not putting all your eggs in one basket.”

Gillard, who conducts dry bean variety trials at various sites every year, notes there a number of excellent online resources that growers in Ontario can use to investigate new varieties, including gobeans.ca and beanyieldtrials.ca.

Narrower row widths
Dry beans are among the most difficult crops to achieve good weed control in, according to Gillard, with some growers experiencing yield losses of 50 per cent or more due to weed interference. One possible answer, he says, is narrower row widths.

Gillard has performed a number of studies with different market classes of dry beans that showed when row widths were reduced from the traditional 30 inches to 15 inches, there was either no significant yield difference or there was an upsurge in yield.

“What people typically will see with narrow rows is that there’ll be a yield increase,” says Gillard, adding his research indicates the yield increase could be “anywhere from five to 10 per cent.”

Lower seeding rates
Dry bean growers looking for ways to cut down on seed expenses and also lower disease risk might want to consider reducing seeding rates, especially in the most productive areas of their fields.

Gillard maintains that by reducing seeding rates, dry bean growers can save up to five per cent on their seed costs — without sacrificing yield.

Gillard’s dry bean studies indicated that a 20 per cent reduction in seeding rates can result in minimal yield loss, as long as the crop is planted early or on time. Planting later than normal in traditional wide rows will result in smaller plants and an insufficient canopy cover that limits yield, Gillard says.

Fighting white mould
Lower seeding rates can also act to combat white mould, which is the most widespread foliar disease in dry beans in Ontario and can yield losses in excess of 50 per cent, according to Gillard..

Gillard notes that high-producing parts of a dry bean field which could be prone to white mould infections may benefit from less seed.

“Lower plant populations [in those areas] will allow you to get better air movement through the canopy and you’ll get less foliar disease as a result,” Gillard says.

“Where you usually have lots of vegetative growth, it’s possible that having fewer plants will decrease issues with white mould,” she says.

Gillard notes that fungicides are routinely used to fight white mould in dry bean fields in Ontario. Before deciding to spray, he says, growers need to know their field histories “because if you’ve had white mould there before, your risk is much higher.”

Gillard stresses that application timing is also key: “If you’re putting a fungicide on, you want to put it on early to stop the disease from starting. These products are protectants, not eradicants.”

He adds that high water volumes are necessary to maximize the effectiveness of chemical controls for white mould. “Coverage is critical,” Gillard says. “You’re trying to protect everything down to the base of the plant.”

According to Gillard, growers should pay attention to cool, wet weather during the flowering period of their dry bean crop because it increases disease risk. Growers who encounter these conditions during flowering may want to apply a second fungicide application 12 to 14 days later, he adds.

“With some of these products, we can reduce disease levels by 30 or 40 per cent and we can increase yields by at least 50 per cent or more,” he says. “There are new products that come into the marketplace all the time that need to be tested and compared to existing standards.”

Combatting western bean cutworm
Western bean cutworm (WBC) is a common pest in corn and dry beans, that’s increasing in numbers and in geographical spread across Ontario, according to Moran. In dry beans, the cutworms feed on seed pods, which lead to losses in quality and the price farmers can expect to get for their crop.

Moran says cultural practices are largely ineffective against WBC because field infestations are normally caused by the pest flying in from somewhere else. She notes that Matador, Coragen and Voliam Xpress are the three insecticides registered for dry bean control in Ontario.

Moran recommends growers install WBC pheromone traps in their beans fields and look for feeding damage on pods before applying insecticides. She says growers should also make sure that it’s WBC and not some other pest that’s causing the crop injury.

Moran stresses that good pod coverage is required when spraying, and that chemical control is most effective during early pod feeding, which typically starts 10 to 20 days after peak flight of WBC moths.

The cutworm larvae are usually in the soil during the day and travel up the plants to feed at night, Moran says, so it’s important to spray in the evening. It’s also essential to rotate chemistries to avoid resistance development.

“This is our number one pest of corn in the province at this time, so we don’t want to get ourselves in a situation where we have resistance,” Moran says.

“Dry beans are an alternate host to this pest,” Gillard says. “The problem in Ontario is that most dry bean growers are also soybean growers, so they’ve got two susceptible crops in their rotation.

“With this pest, once you get it in your soil you never get rid of it. You can only manage it,” he adds. “The first thing is to test your soils to see if you have [SCN] and if so, at what level . . . If you have it and it’s bad, you need to know learn how to manage it quickly.”

Gillard notes that chemical control isn’t an option since there aren’t any registered SCN products in Ontario. Therefore, “crop rotation is your number one method for managing it.”

Gillard recommends rotating to corn, wheat or canola after dry beans, since they are all non-host crops to SCN. And if you have soybeans in your rotation, he says, it’s also a good idea to plant a variety with some SCN resistance.