Long, sausage-like rows of white grain bags have become common across the Prairies as not only a way to deal with bumper crops, but as a way to conveniently store grain in the field. However, little Canadian research has been done to look at the safety of storing canola at different moisture levels, and determining how long canola can be stored in the bags without losing grade.

“Silo bag storage is probably a cost-effective method compared to other temporary storage systems, but there are some concerns over seed spoilage, insect and mould damage, moisture migration and quality losses,” says Digvir Jayas, project leader and grain storage expert in Biosystems Engineering at the University of Manitoba.

In addition to Jayas, the team included Chelladurai Vellaichamy, a graduate student, and Fuji Jian, a research engineer, both in biosystems engineering at the University of Manitoba; and Noel White and Paul Fields of Agriculture and Agri-Food Canada at Winnipeg. They conducted two studies looking at grain bag storage in canola. The results of these studies have been submitted as two papers (full versions are available from Jayas) to the Journal of Stored Products Research for publication.

Canola best stored if dry
The research covered two periods. The first project looked at canola at three different moisture contents 8.9, 10.5 and 14.4 per cent (wet basis), representing dry, straight and damp grades, stored in silo bags for 40 weeks (from autumn 2010 to summer 2011) at Winnipeg, Man. For each moisture content, each bag was loaded with approximately 20 tonne canola seeds with greater than 90 per cent initial germination. Germination, free fatty acid value (FAV), and moisture content of canola seeds at seven locations of each silo bag were analyzed every two weeks along with carbon dioxide concentration of air and temperature between canola seeds.

Moisture migration was evident with the top layer showing significantly higher moisture content than the middle and bottom layers over the first 28 weeks of storage of dry canola. By the end of the storage period, the middle and bottom layers had higher moisture content than the top layer for dry and straight moisture bags. Damp moisture bags experienced larger moisture gradients, especially after 28 weeks of storage.

“This trend shows the accumulation of moisture due to condensation at the periphery of bags caused by temperature and moisture gradients during autumn and winter seasons, and in the summer the top layer grain was dried due to the hot ambient temperature,” Jayas reports.

Temperature and CO2 concentrations were also measured. Temperatures fluctuated depending on season, and sampling location. In dry and straight grade canola bags, the bottom layers had higher temperatures during autumn and winter. In the spring and summer, temperature was hotter near the top. Jayas says the temperature of the top layer of the seeds followed the ambient temperature changes. For damp canola, temperature gradients were completely different.

While the dry, straight and damp canola all graded Canada No. 1 when loading the bags at the start of the trial, there was degradation for the straight and damp canola after 40 weeks. The dry canola still graded No. 1, but small amounts of heated seeds in the top layer of straight canola bags reduced the grade to No. 2. After 40 weeks, the damp grade canola was caked and, because of the high moisture, the grain bag extractor could not unload the canola seeds from the bag. The damp canola graded Feed. 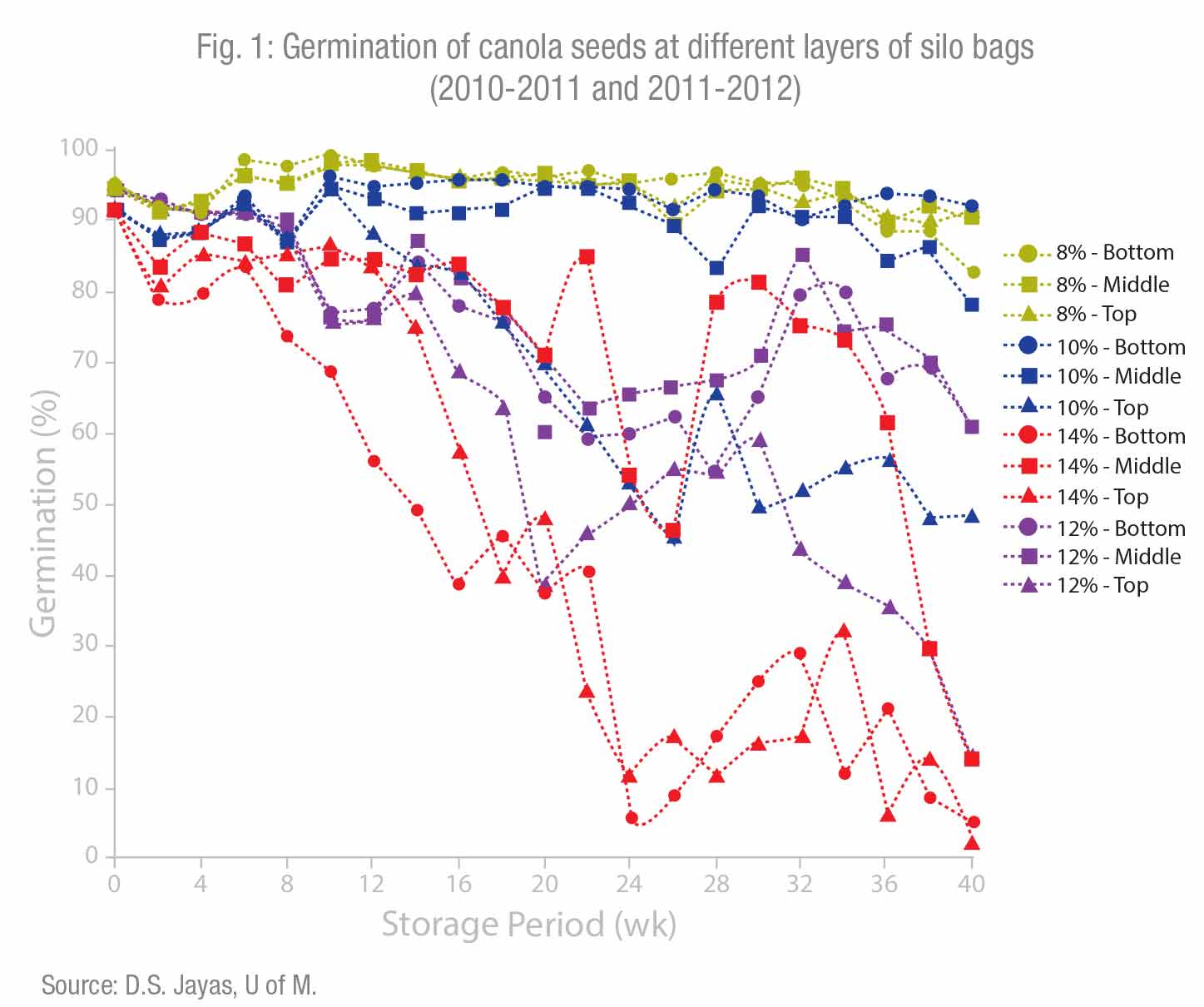 Refining storage time for damp canola
While the first project found that dry canola could be safely stored up to 40 weeks without loss of grade, the researchers wanted to find out if damp canola could be stored for shorter periods of time without losing grade. They conducted additional research for two storage years (2011-2012 and 2013-2014) to determine the changes in grain quality while storing 12.1 and 12.4 per cent moisture content canola in grain bags. The temperature during loading was 15.5 C and 16.2 C, respectively.

Once again, canola was stored in grain bags in the fall, but in these years, the bags were unloaded at three different times at 20 weeks (middle of winter), 28 weeks, (end of winter) and 40 weeks (summer). Again, germination, FAV, moisture content, temperature and CO2 levels were monitored.

The results of both storage years showed that there were significant changes in moisture content with an accumulation of moisture in the top layer of grain. In both the years the FAV values remained at safe levels until 20 weeks of storage, but increased at 28 weeks and was more than double at 40 weeks. This was an indication of quality loss. (See Fig. 1.)

“Canola seeds with 12 per cent moisture content could be stored up to five months, into the late winter, without any quality deterioration under the western Canadian conditions,” Jayas says.

The results of the two projects indicated that dry canola loaded into grain bags at ambient temperatures of around 15 C could be stored up to 40 weeks without loss of grade. Canola at 12 per cent might be safely stored up to 20 weeks. If canola is above 12 per cent moisture, growers should consider drying the grain first before storing in grain bags, or only use grain bags for temporary storage of a few weeks. 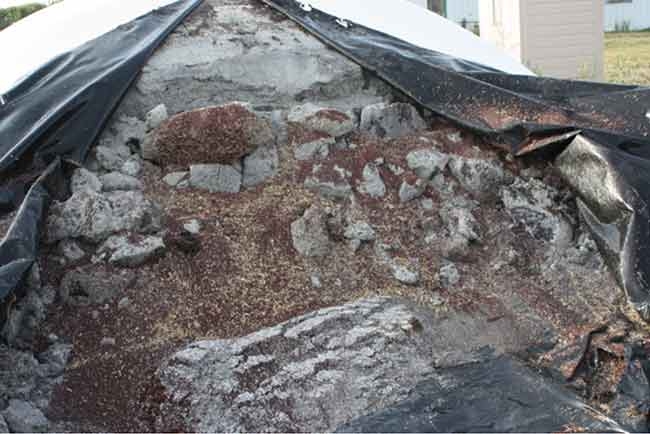