According to the Canola Council of Canada, canola contributes $19.3 billion dollars per year to the Canadian economy. In his lab at the University of Alberta, Habibur Rahman is working to ensure that figure only increases in the coming years.

Rahman is spearheading a long-term breeding project that aims to broaden the genetic diversity of Brassica napus, with the goal of developing strong canola lines to use in Canadian breeding programs.

Rahman’s project is funded by a Natural Sciences and Engineering Research Council of Canada (NSERC) Collaborative Research and Development Grant as well as industry collaboration with Crop Production Services (CPS), a Western Canada-based subsidiary of the agri-retail giant Agrium.

According to Rahman, the narrow genetic base in B. napus canola limits continued improvement of the crop. But the progenitor species of B. napus, Brassica rapa and Brassica oleracea, contain a vast amount of genetic diversity that can be tapped to develop new hybrid parents for B. napus.

The introgression of genetic diversity from allied species is no easy task. For example, the use of B. oleracea, an allied, diploid species that includes common vegetables such as cabbage, kale and cauliflower, creates a challenge for canola breeding programs. It is very difficult to obtain a hybrid plant from crossing this species with B. napus and develop a B. napus canola plant from the progeny of this interspecific hybrid. Furthermore, B. oleracea species contain many undesirable traits for canola, such as high levels of erucic acid and glucosinolates in seeds.

To shed undesirable traits while bringing in necessary genetic diversity, Rahman and his team must run multiple breeding cycles, each cycle running for at least five years, before achieving good hybrid parents.

Ultimately, hybrid parents developed in the program will exhibit good agronomic qualities, including yield, as well as resistance to clubroot and blackleg. “We’re maintaining the agronomic standards and increasing the yield,” Rahman says.

“We are integrating genetic diversity from allied species to make parents for good hybrids – in other words, trying to develop better parents for better hybrids,” he says. “It’s a long-term project, because we improve it step by step.”

The next step for Rahman’s program will be entry into the second cycle of breeding, in which the genes from B. oleracea will be retained. “Then we’ll test the parents to make better hybrids,” Rahman says. “We’re generating thousands of lines and we have to identify which one gives the high yield advantage. We also have to identify which regions of the chromosomes carries the genes to give high yield in hybrids.”

It may be eight to 10 years before the long-term project is concluded, but in the meantime, Rahman’s program is already bearing fruit.

Industry collaboration
CPS’ partnership with the University of Alberta’s canola breeding programs goes back at least 20 years, but in 2010 a joint breeding program was established. Through the program, Rahman delivers strong inbreds to CPS, which develops hybrids using the new genetic material.

As a direct result of this collaboration, CPS has already created products designed to meet immediate needs in the industry, such as clubroot resistance. The company has submitted a registration application for a new clubroot-resistant variety that will become available in introduction quantities for the 2016 planting season under the Proven Seed brand.

CPS is Canada’s largest canola seed retailer, and it also maintains its own in-house breeding institution located in Saskatoon, Sask. “Overall our program has all of the essential elements of canola breeding to produce hybrids for the western Canadian market,” says Andy Andrahennadi, senior hybrid breeder with CPS Canada. “We have a program in Australia as well, and through that we’ve been able to access valuable germplasm specifically with regard to blackleg. With regard to canola breeding in Canada, we strongly focus on yield, yield stability and disease resistance.

“Dr. Rahman’s program helps us in exploring the right genetics and other traits that we cannot spend the time to focus on, so it’s really complementary to our program,” Andrahennadi adds.

Alan Grombacher, senior inbred development breeder with CPS Canada, says the two programs have complementary “synergies,” with Rahman’s focus on development of germplasm and inbred work meshing well with CPS’ work in hybrid development. “It gives us a really wide range of genetic material that allows us to create strong hybrids, as well as the ability to be timely and address disease situations like clubroot,” he says.

The company’s strategy for developing varieties resistant to clubroot involves a multi-gene approach. With the help of Rahman’s raw materials, CPS has developed hybrids with resistance to clubroot pathotype 5x, as well as pathotypes 2, 3, 5, 6 and 8.

“The relationship with the University of Alberta is at a stage where there is lots of material coming through the system,” Grombacher says. “In the early years we were building the program and getting it rolling. But once you get to a certain point, your pipeline is full and you start producing lots of material.” 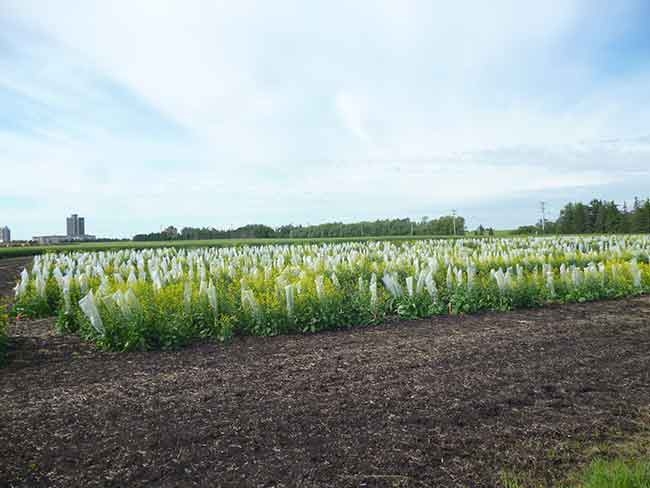 The University of Alberta’s Habibur Rahman’s canola breeding program involves identifying which new lines will give the high yield advantage. According to the Canola Council of Canada