In 2010, Dan, Tim and Ron Sawatzky equipped Sawatzky Enterprises Ltd. with a pneumatic system for distributing grain to a generation of new and larger bins than their father, Glen, had used. They also extended the tubing to deliver grain overhead about 80 feet to the out-of-date grain leg for the system their father had built around 1978. “The old system just became obsolete. We farm about 5000 acres today and have been growing the storage for about five years (since about 2006). We went to the pneumatic system last summer when we upgraded our dryer,” says Dan Sawatzky.

Today’s primary storage system is west of the original system. It has capacity for about 215,000 bushels of storage in a U-shaped bin arrangement. It has four 29,000-bushel flat-bottom bins, one 45,000-bushel bin, and a dozen 4400-bushel hopper bins. Trucks arriving from the field also can unload to a pair of new 6000-bushel wet bins feeding the new grain dryer. All of the bins have full-aeration floors and fans.

The two systems, old and new, are separated by about 32 feet for a truck roadway. The original system, still in use, is about 100 feet long. The new system spans about 300 feet west and up to 300 feet south from the leg. Each bin in the new system is tied in with its own six-inch pneumatic pipe running from a pair of distribution boxes close to the central airlock.

The complex storage is a solid example of a “good fit” for a pneumatic grain system today, says Adrian Caillier, owner/manager of A.R.K. New-Tech Ltd., in Manitou, Manitoba. A.R.K. designs, delivers and services systems for grain handling and conditioning throughout Western Canada. It is a retailer for products, including Farm Fans dryers and high-capacity blowers by Kongskilde and ConveyAir.

As storage systems go, the Sawatzky project was mid-sized, says Caillier. A.R.K. had a project underway at about the same time at Englefeld, Saskatchewan, providing pneumatic handling for an 850,000-bushel system. It also was installing much smaller pneumatic conveyors to solve issues like manpower, grain drying, grain handling and mixed bin storage.

Sawatzky Farms required the most powerful motor in the arsenal, a 75-horsepower three-phase unit, for the long push and 45-foot elevation. The system delivers about 2200 bushels per hour to a maximum run of about 350 feet.

A small system can operate with as little as a 10-horsepower single phase motor. Typical farms, with single-phase power, can use up to two 15-horsepower motors.

In about 2006, ConveyAir introduced distributor boxes. Each distributor has one inlet at the bottom and up to six outlets at the top. When it is time to redirect grain to a different bin, the operator turns the rotary switch on the distributor.

Three-phase power was available for the Sawatsky project. Manitoba Hydro only needed to install three poles.

Less manpower
The Sawatzky brothers took one further precaution in the summer of 2011: They had an electrician install sensors to prevent over-filling at every bin. The sensor will shut down the whole pneumatic system until an operator can redirect the grain and restart the system. “As manpower is harder to find on farms, there’s more and more demand for a total grain handling system where one man can haul the grain into the yard, dry the grain and put it into final storage,” Caillier says. “Prior to this pneumatic conveying system for Sawatzky Enterprises, it took a lot of trucking and would be a two- or three-man operation.”

Crunch-time came for the Sawatzky brothers when they needed to add a high-capacity dryer to the new system. They needed the dryer, but the dryer would need another person in the yard to operate continuously while trucks were arriving with new loads from fields.

They decided that air was the best option. A bucket elevator is limited by height, a chain or U-trough-driven grain delivery system would be cheaper for bins in a short straight row, but not for their irregular bin arrangement. “A bucket elevator would never fill all those bins,” Caillier says. “If you want to convey 200 feet away with a grain leg, the grain leg has to be 200 feet higher than the bin to get the 45-degree slope. For a U-trough conveyor on top of your bins, they all have to be in line. Then, you’re limited on how long your conveyor can be based on horsepower.”

Bushels-per-hour capacity favours other systems. Wheat delivery with air in the largest six-inch tube is limited to about 2200 bushels per hour. Other high-capacity grain systems can deliver more than 10,000 bushels an hour.

However, the air route can be longer and it can be routed in any direction, including upwards to a 150-foot tall grain terminal. “Normally, the pipeline is 300 to 400 feet but we have gone as far as 900 feet. At 900 feet you lose quite a bit of capacity, but sometimes if you don’t have to truck it, it doesn’t matter if it takes a little more time getting it out there,” Caillier says.

The A.R.K. system also is very gentle with seed. Comparing systems, Caillier points to two other things favouring air. “Number one, it’s kernel in, kernel out. If you want to preserve the integrity of your commodity, for seed or even for keeping grains separate, kernel in, kernel out is a big feature. Second, it’s flexible. Your bins don’t need to be lined up and they can be different heights. Once your basic package or infrastructure is installed, if you add a bin it’s just a little bit more piping. It’s a system that can easily grow.”

‘Works for us’
The new dryer and pneumatic conveyor system solved the issues they wanted it to address in the first season of operation during the fall of 2010, according to Dan Sawatzky.

The brothers selected a propane-fired Farm Fan 370 continuous batch dryer. It can fill and unload at the same time without losing drying capacity. It has continuous automatic capability, although for the first year and without bin-full sensors, they ran it as a batch dryer.

Trucks arriving with a fresh load for the system can deliver to two 105-foot, 13-inch augers. If grain comes in dry enough from the field, one auger can put it directly into final storage. The other auger unloads into one of the two wet hopper bins. The dryer is fed by an auger out of those bins. “The air lock system was set up more for moving grain out of the dryer and being able to access every bin on the yard,” Sawatzky says. “We may go to a central fill to avoid moving augers, but with bigger bins it’s just as well to set up the auger and load them separately. The auger will sit there a long time.”

One of the 4400-bushel hopper bins feeds the system. The air lock is below that bin, powered by the adjacent 75-horsepower motor and six-inch blower fan.

System controls are easily accessible in a small circle. There is a metering switch and a fan switch, with gauges for amperage use. Two manual distributor boxes are adjacent and mounted on the pneumatic bin. Dryer controls, including a safety shutdown switch, also are nearby. “Back 30 years ago when we set up our old dryer, we could access all our grain storage from the dryer, through the leg. That was something we didn’t want to give up,” Sawatzky says. “That was the biggest reason we went to the air handling; it could accommodate that for us. We were trying to get away from one person being there full-time, and I think we’ve accomplished that, especially now that we’ve had our safety shutoff sensors installed. We should be able to let it go this fall without a person around.” 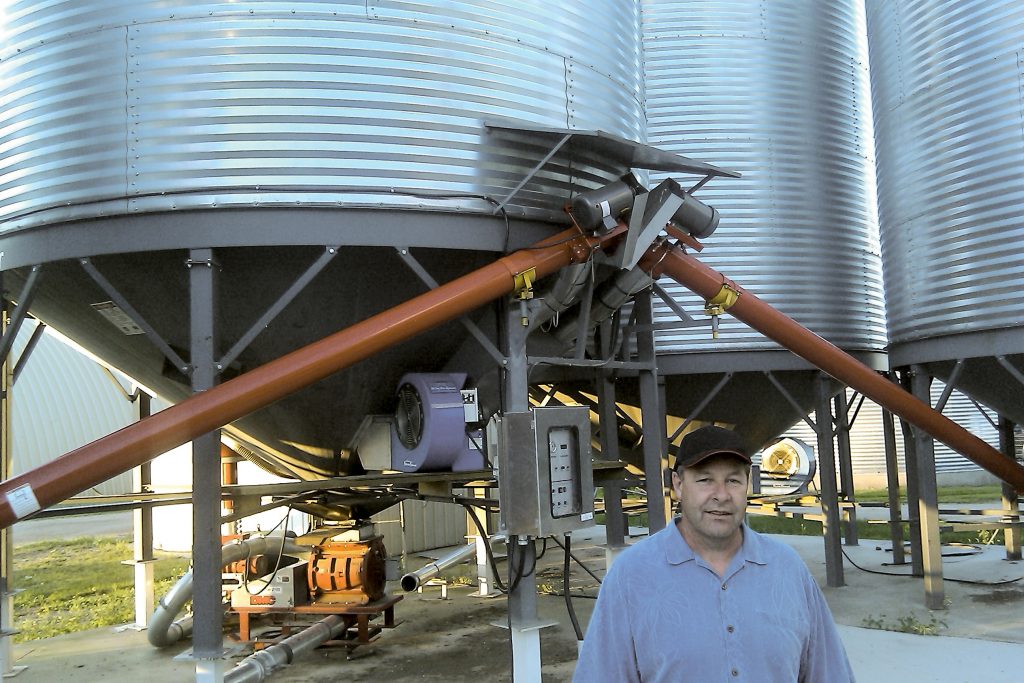 A 4400-bushel hopper bin feeds the pneumatic system on Dan Sawatzky (shown) and his brothers’ farm. This pneumatic grain handling system definitely does not suck; it literally blows grain into storage.