With consolidation a major trend in agriculture today, many farmers who take on additional acres are running into a costly side effect of growth: the need for more – often a lot more – grain and fertilizer storage space.

It’s a situation Albert, Paul and Ken Wagner, brothers who together grow grain and oilseeds near Stony Plain, Alberta, know well. Short storage space for about 100,000 bushels of grain and looking to store more fertilizer on-farm, their decision to buy a grain bagger six years ago instead of constructing new bins was based on sharp financial calculations. But, they have since learned that grain bags offer hidden side benefits: convenience, flexibility, time savings and – for farmers who make the leap to storing fertilizer as well – very considerable input cost savings.

“Switching to grain bagging, especially switching fertilizer storage to bags, needs a bit of outside-the-box thinking,” says Albert Wagner. “But, if you can make the mental leap, there’s a fit on most farms that do a fair volume of production, in particular if the land is spread out. There are downsides to using grain bags, but we think they are manageable and the upsides certainly outweigh them.”

The Wagners’ decision-making process started with a “back of the napkin” cost calculation comparing building traditional bin space versus buying bagging equipment.

Six years ago, Albert Wagner estimated that constructing traditional steel bin storage cost in the range of $2 per bushel, or $200,000 for 100,000 bushels of storage space. Given their stage of life, Wagner estimated financing the bin over a decade at six per cent per year, or an additional $120,000, bringing the total cost to $320,000. He then estimated that at the end of the imagined decade, the bin would be worth in the range of $75,000, leaving a total residual cost of $245,000, or $2.45 per bushel of storage over 10 years.

Then, he estimated the costs associated with bagging grain. At the time, a bagger cost about $26,000 and an extractor about $27,000. Using the same borrowing estimates (six per cent per year over 10 years), Wagner calculated financing costs of $31,800. The bags themselves cost eight cents per bushel per year, or $80,000 over a decade for 100,000 bushels of grain. Even if residual value of the machinery were $0 after a decade, the total cost of the grain bag storage would be $164,800 over a decade, or $1.65 per bushel. Comparing the $2.45 per bushel for traditional storage versus $1.65 for grain bagged storage, Wagner calculated an annual savings of $802 and a total savings over a decade of about $8000.

“But the real savings is in the decreased cost of trucking and manpower,” he adds. “Storage in the field means you don’t have to truck to a bin yard, which in our case was quite a distance away from certain fields. Using grain bags in the field significantly decreased our turn-around time and increased our overall efficiency.”

Wagner says this method of storage offers grain quality benefits as well. So long as the bag is sealed correctly and has no holes, air cannot move inside the bag, which means that heat and moisture do not migrate, and hotspots – common in a traditional bin – cannot develop. Further, because the bag is long and low, the heat caused by downward pressure in a traditional bin is not an issue, resulting in another reason for decreased spoilage.

“We found we can store grain at a higher moisture content: we put barley in at the end of September at 19 per cent moisture. There’s increased surface area so it cools faster, and it’s also airtight, so it doesn’t go bad,” says Wagner.

Based on the first harvest’s grain bagging success, the three Wagner brothers wondered if they might be able to store their fertilizer similarly.

“People are leery about putting fertilizer in bags because they see this pile of fertilizer, which is a pile of money, and they say ‘if this doesn’t work, I’ve got a problem.’ You do have to go on a bit of trust that ski-doers aren’t going to run over your bags; that the wildlife will stay away,” says Wagner. “But, using a bagger to store fertilizer offers a number of advantages, so we decided to try it even though no one else that we knew of was doing it.”

The biggest benefit of bagging fertilizer is unlimited storage space, which means a producer can buy more cheaply in the offseason. Wagner estimates the cost saving of buying 600 tonnes of fertilizer in the fall, including financing the necessary money, compared to buying the same amount of fertilizer in the spring covered the capital cost of the bagger and extractor in just two years.

And, bagged fertilizer offers enormous convenience. Farms located far from fertilizer dealers, like the Wagners’, can have fertilizer not only on-farm and waiting come seeding time, but in handy locations throughout the property to decrease turn-around time.

Six years of bagging grain and fertilizer have taught the Wagners some valuable tricks for success. For best results, choose a knoll as a storage location so that the ground slopes away from each bag end to ensure the ends don’t ever end up sitting in water. When loading, carefully monitor the stretch of the bag to make sure it doesn’t burst, especially if you are filling bags in cold weather when the material has less stretch. And, check them often for damage: they are not a good fit for someone who plans to be away for long periods over the winter.

The Wagners view grain bags as temporary storage only and try to move the grain during the winter, mostly because the risk associated with any kind of bag damage goes up once precipitation turns from snow to rain. An added reason to move the stored product over the winter is that convenient in-field storage locations at harvest are supremely inconvenient come seeding.

Most importantly, Wagner says, “Really, really clean up spills, even if the spill is only a shovel full. If wildlife figures out what you have in the bag, you have a problem. We’ve had deer find stuff under 18 inches of snow. If they don’t know what’s in the bag, they’ll leave them alone.”

Coyotes like the view from the top of a grain bag, and their claws can punch holes in the material. Wagner has found that laying a plastic snow fence along the incline at the tail end of a filled bag is enough to keep them off. Likewise, net wrap from hay bales seems to help keep birds from landing on filled bags because they don’t like the uneven surface.

The Wagners’ good success suggests grain bagging may suit other Prairie producers. If you are in the market for storage and have an open mind, run numbers specific to your own operation to calculate whether bagging grain and fertilizer could have a fit on your farm. 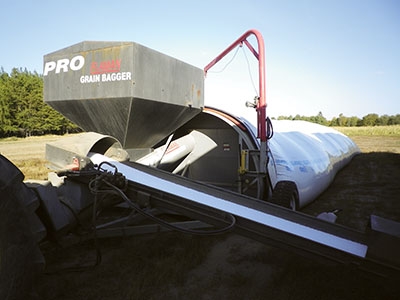 Using grain bags in the field decreases the Wagners’ turn-around time and increases overall efficiency. Three brothers are thinking outside the bin for on-farm storage.


Related
Predicting rot can save the crop and money
Producing bioproducts to save money
Will field drying corn save money?
Grain bags provide ideal storage