If you want to – or have to – store your grain into the summer, what are the best practices to prevent spoilage? Recently completed Prairie research gives a straightforward answer to that question. 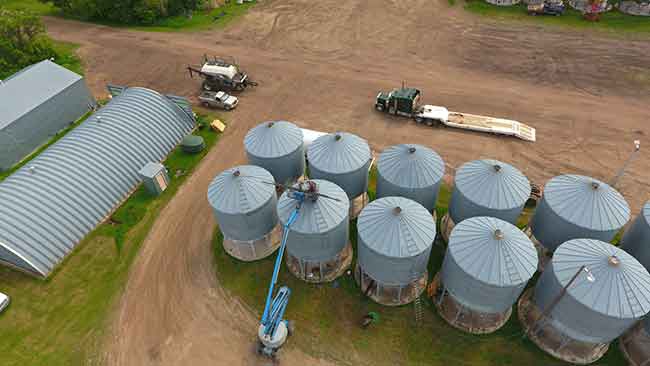 The project compared three treatments of canola stored through the summer: one bin was left alone If you want to – or have to – store your grain into the summer

The initial catalyst for this research was a bumper crop in 2013 followed by grain marketing and transportation issues in 2014. As a result, many Prairie farmers were looking at storing their grain into the summer of 2014. And quite a few of them called Joy Agnew at the Prairie Agricultural Machinery Institute (PAMI) to ask what they could do to improve their grain storage conditions over the summer.

At the time, Agnew’s expertise focused on natural air drying and aeration of grain in the fall after harvest, not summer storage. So she did some digging to see what other researchers had found. “I discovered there hadn’t been much research on it. There was anecdotal evidence, but nothing that conclusively said you should do one thing over another,” Agnew says.

To fill that information gap, she conducted an initial project in 2014 with the help of funding from the Canola Council of Canada.

“Storage in general is such a vital part of any producer’s operation. First and foremost, we want to understand techniques necessary to manage stored canola with no resulting losses or deterioration in quality,” says Angela Brackenreed, an agronomy specialist with the Canola Council of Canada. “We realized that we did not have a good handle on the best way to manage canola in the bin throughout the warm summer months. This practice may not be something that every farmer chooses to do, but if we can understand it, at least the option is there.”

She adds, “If producers can be confident in the management techniques necessary to ensure safety of their stored canola, it allows the ability to use storage as a marketing tool.” For instance, there might be situations where growers could get a much better price if they hold onto their canola into the summer.

In this project, Agnew worked with a Saskatchewan producer who had three 4000-bushel, 18-foot diameter bins of canola that had been stored all winter and would be stored throughout the summer. Since the grain was already in the bins, Agnew’s team devised specially designed probes that could be inserted into that grain from the outside of the bin without disturbing the naturally occurring temperature and moisture profiles in the grain. In each bin, they installed nine in-grain sensors, plus two in the headspace and one near the bin’s fan.

Monitoring of temperature and relative humidity began in early June. The initial readings showed the canola was very dry, with an average moisture content of 6.5 per cent, and very cold. The producer had run the fans in the three bins during the winter when the outside air temperature was below -30 C, and the grain remained quite cold into the summer. Agnew says, “At the beginning of June, the coldest reading from the temperature sensors in the grain was -17 C. We also monitored the temperature of the grain that we were pulling out from the turned bin with an infrared thermometer, and got a reading of -25 C at one point.”

They monitored the bins all summer. “We didn’t see any hot spot formation or moisture migration, which is a good thing because that would have been a terrible loss for the farmer,” she notes. “But we did see some unstable conditions in both the aerated and turned bins.”

This instability occurred because aerating and turning the bins each caused very cold grain to be right next to warm grain. In the aerated bin, the abrupt hot-cold transition occurred as the front of warm air moved through the cold grain. In the turned bin, the warm seed at the top funnelled down into the very cold grain at the center of the bin during turning. Agnew explains, “Any time you have a sharp temperature change like that, you have the possibility of condensation. For instance, if you have a cold glass of water on your desk on a warm day, there’s a possibility of condensation. So there was some concern right after the aeration and the turning, but we kept a close eye on everything, and everything worked out.”

The left-alone bin had the most stable conditions because it didn’t have those sharp temperature transitions. Instead it had a large but gradual temperature gradient. By late July, the grain temperature was still below 0 C in the bin’s core and gradually increased to around 20 C to 25 C at the outside edge of the bin.

“So the take-home message from the 2014 trials was that leaving the bin alone was the best bet, but that was if the grain started off really cold and very dry,” Agnew explains. “The fact that we saw no moisture migration and no condensation may have been due to the fact that there was very little moisture in the grain to begin with.”

That raised the question: what is the best practice if the grain is stored under different conditions?

To answer this, Agnew conducted a follow-up project in 2016 with funding from the Canola Council of Canada and the Saskatchewan Ministry of Agriculture’s Agriculture Development Fund. This project had two parts: a three-bin experiment and occasional sampling of various bins covering a range of storage conditions.

For the three-bin experiment, they basically repeated what was done in 2014, but this time the canola had to be tougher than 6.5 per cent, ideally around nine or 10 per cent. Agnew had worried that they wouldn’t be able to find a producer with canola stored at that moisture. Although elevators consider canola to be dry at 10 per cent, the maximum moisture recommended for long-term storage of canola is eight per cent (when the temperature is 15 C or less).

Fortunately they found a willing Saskatchewan producer with three 4500-bushel, 19-foot diameter bins of canola with an average moisture content of nine per cent.

So, once again, the project team left one bin alone, aerated one, and turned one. Based on the 2014 project, they fine-tuned the procedures for inserting the probes and placed them at the same 12 bin positions as in 2014. At the start of the project, grain at the core of the bins was still frozen; for instance, the core temperature of the left-alone bin was -7 C. They monitored the bins until the grain was removed in mid August.

“In 2016, we saw the exact same thing that we saw two years ago. Even with the tougher canola, there was no evidence of moisture migration or condensation,” Agnew says.

For the second part of the 2016 project, several producers allowed the project team to collect some data from their bins. “Rather than collecting the data continuously with those specially designed probes, we had staff go out to these farms once every two or three weeks and insert temporary probes and collect data from differently sized bins with different management conditions,” Agnew says. Although the bin sizes around 4000 bushels that were used in the three-bin experiments are fairly common on the Prairies, she says the average bin these days is closer to 12,000 bushels.

Based on the results from the two projects, Agnew’s recommendation is: “If canola has to be stored over the summer, cool it as much as you can over the winter and then leave it alone, but keep an eye on it. These two projects have provided great information, but they don’t cover every single situation that could happen, and canola is known to be very finicky and to spoil easily.”

She adds that this storage management recommendation also applies to other grains. “All the laws of physics are exactly the same. We focused on canola because it’s such a high-value crop. Any bin of grain that spoils is a serious problem, but spoiling a bin of canola is especially damaging to the pocketbook.”

The project compared three treatments of canola stored through the summer: one bin was left alone