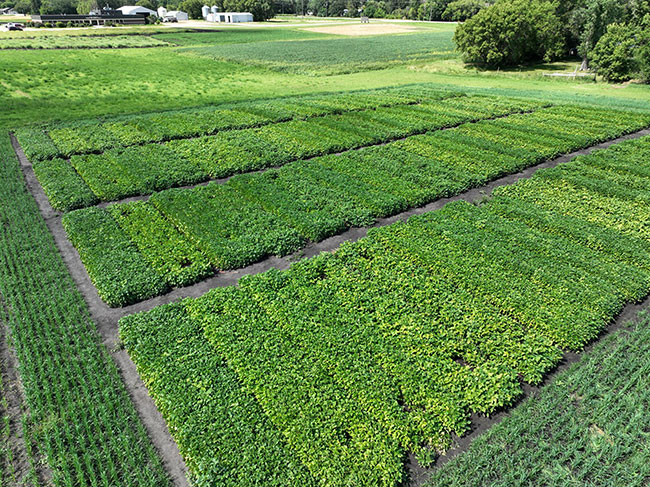 Dry bean growers generally rely on supplemental nitrogen (N) to maximize yields. Unlike other grain legumes like soybeans, peas and fababeans that can produce more than half of their N requirements through N fixation, dry beans are known to be poor N fixers, producing less than 40 per cent of required N. However, with the adoption of new genetics, improved rhizobia strains and a longer field history of dry bean production, it is time to revisit N management recommendations developed over 20 years ago.

“Dry beans have typically been considered non-legumes in terms of N management, and in most areas growers fertilize to their full N requirements,” says Kristen MacMillan, research agronomist with the University of Manitoba. “The interaction of dry bean varieties, rhizobia strains and the environment can all affect their ability to fix N and further complicate N management. Since 2017, a key objective of my research program has been to update N recommendations for dry beans, including studies focusing on fertilizer N and the potential of new inoculants.”

In the first of the studies, N fertilizer rates were compared over three years at Carman and Portage La Prairie, Man., from 2017 to 2019. “This was a typical N rate study, ramping up N rates in increments of 35 lbs/acre, ranging from zero to 140 lbs in navy and pinto beans,” MacMillan explains. “Surprisingly, we did not see the economic responses we expected, and in fact observed impressive yields without any N fertilizer. The non-fertilized bean yield was 2700 lbs/ac, on average, and the yield gains from increasing N rate was incremental, resulting in a 17 per cent yield increase at the highest rate of N (Figure 1). The lowest rate to match maximum yield was 35 lbs/acre. The economic analysis revealed that considering the cost of N fertilizer, the return to N diminished and was statistically the same for all rates of N application.” (Figure 2) 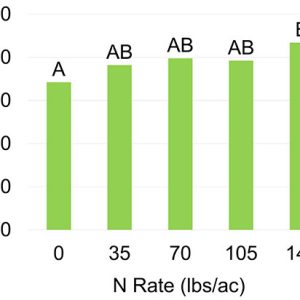 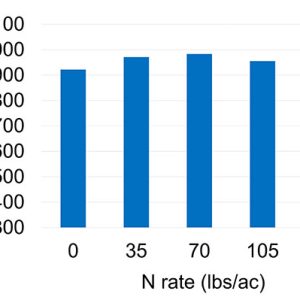 MacMillan says results of the N fertilizer study put assumptions about fertilization of dry bean to the test. “If the beans aren’t responding to N fertilizer, then how are they acquiring N? The answer to that was from underground, which was supported by the nodulation assessments and data collected. While we observed nodulation in all of the treatments, it was significantly higher in the non-fertilized, non-inoculated beans. Increasing N rates incrementally reduced nodulation especially at the 70 lbs/acre N rate and higher, where nodulation ratings dropped to 0.4 from 0.8 at zero lbs/acre N. Like other legumes, if plants can acquire ‘free’ N from fertilizer, they won’t put as much energy towards nodule development. Unlike Bradyrhizobium japonicum, the rhizobium species that interacts with soybean and is provided through inoculants, Rhizobium species that interact with dry bean are present in prairie soils. With the non-economic response to N fertilizer and presence of root nodulation, we started asking whether we might be overlooking the ability of today’s dry bean varieties to fix N and the potential to improve that through inoculation.”

In 2019, MacMillan initiated a study in Carman, Melita and Portage la Prairie, Man., to evaluate new inoculants that had recently become available on the market. Dry beans are a small acreage crop, and with the history of generally poor response to inoculants, along with apparent specificity that seemed to be prevalent among the market classes, new inoculant development has been limited. The three-year study is comparing two new inoculants across three common dry bean market classes including pinto, navy and black beans. The objective of testing agronomic practices across market classes is to address the specificity that can occur among classes and cultivars to particular rhizobia strains. 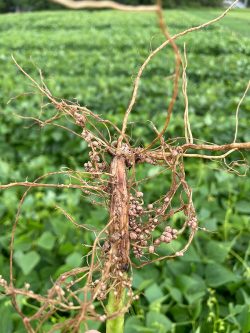 “In these studies, I’m testing the response of the inoculant or fertilizer, but also determining if the response varies by market class or environment. One key finding thus far is a consistent fertilizer and inoculant response across the market classes,” MacMillan says. “It is ideal when agronomic practices can be applicable across market classes, so this finding was very significant.”

The response, however, has varied by environment, which MacMillan attributes to soil pH. At Melita, the results showed a response to at least one of the inoculants with improved nodulation ratings and yields. At Carman, where the sites have had a soil pH of six or less, there was overall lower nodulation than at Melita and no response to inoculant product. Acidic soil conditions or low soil pH is known to inhibit bean nodulation and is suspected as the reason for the lack of response at Carman. In Manitoba, most soils are neutral to alkaline, so lower pH soils are not a widespread problem, but are more common in parts of Alberta and Saskatchewan, making regional adaptation of practices important. We are continuing the study, and in 2022 added a third new inoculant to the evaluation, however results are not yet available. These inoculants are very new to the market and are not yet widely available, as companies focus on evaluating efficacy and market potential before scaling up commercial production.”

The small plot fertilizer study was extended to evaluations on farm fields in a complementary study with the Manitoba Pulse and Soybean Growers (MPSG) and their On-Farm network. Over the past two years, four on-farm trials have been conducted to validate the results, which overall were similar to the small plot trial results. MacMillan notes that these on-farm trials confirmed the small plot trial results, with no yield response to fertilizer in three out of four trials and very good nodulation. In these fields, the nodulation ratings were actually higher than in the small plots, which is very encouraging (Table 1).

“Going forward, I’m hoping to get funding to take the next step and actually measure biological N fixation,” MacMillan explains. “In the studies so far, the results are providing great evidence of nodulation from naturally occurring rhizobia and even improvement with some inoculants, but quantifying the nitrogen derived from biological fixation is the missing piece in the N budget. A bean crop that yields 2,000 lbs/acre requires 90 lbs/acre of N. Currently, most growers are applying N fertilizer at 60-90 lbs/acre to meet that requirement. However, we are seeing effective nodulation in dry bean, which is likely providing 35 to 50 per cent of N requirements through N fixation. The remaining 30 to 35 lbs/acre will be supplied from the soil pool or supplemental N, with an additional 10 to 15 lbs/acre or more coming from N mineralization during the growing season. Generally, growers have been supplementing N through N fertilization, which has also shown to inhibit nodulation. Understanding the biological N fixation capacity of today’s varieties will enable us to take these emerging N management guidelines and develop new fertility recommendations for dry beans.”

For now, agronomists and growers are encouraged to look at the results of the fertility and inoculant studies, scout fields for nodulation and build their N budget as new guidelines are being developed. Certain soil and environmental factors can affect nodulation, so digging up and checking dry bean roots, the same method as for checking soybean or pea nodulation, and looking for pink and active nodules is recommended. If 35 to 50 per cent of N is being provided through N fixation, then we are on our way to reducing N rates. Growers are also encouraged to conduct field strip trials before completely changing N rates by including a zero N rate as a check, and completing nodulation rating evaluations.

“Through my research program and ongoing studies, we are continuing to put the pieces together to develop new fertility guidelines for dry beans,” says MacMillan. “We have emerging guidelines being developed, and the last step will be to measure biological N fixation. Pending funding, this work is being proposed to begin in 2023. Even though dry beans are a small acreage crop in Canada, making a review of N management and the development of new N fertility guidelines a priority may reduce input costs for farmers and help meet greenhouse gas emissions reduction targets for crop production.”