In an effort to investigate agronomic factors that could push soybean yields higher, research is being conducted to see if there is a yield response to starter nitrogen (N). In areas with high yield potential for soybean, some research has shown benefits to early season fertility N. But so far the results in Manitoba and Saskatchewan have found that with proper inoculation, starter N doesn’t pay. 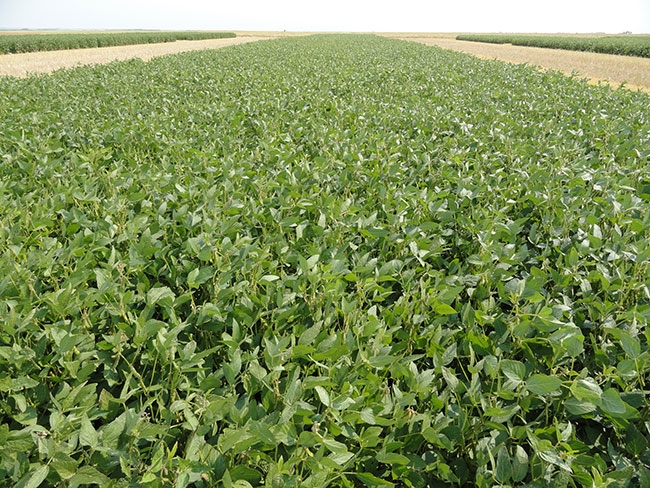 “There was a theory that with our cool, wet soils in Manitoba and the long time between seeding and when nitrogen fixation begins, that there might be a response to starter nitrogen,” says Yvonne Lawley, assistant professor of agronomy and cropping systems with the Department of Plant Science at the University of Manitoba. “I was skeptical that we could push yields higher with starter N, but sometimes researchers have to do crazy things to see what happens.”

Lawley supervised post doctoral fellow Navneet Brar on research into starter N at Carman, Man. Another three-year research study headed up by Chris Holzapfel with the Indian Head Agricultural Research Foundation (IHARF) is being conducted at Indian Head, Outlook and Melfort, Sask. Both studies started in 2015 and preliminary findings indicate that there are no yield responses to starter N.

In the Black soil zone at Carman, Brar planted soybeans on 15-inch rows inoculated with a Brady-rhizobium inoculant from Cell-Tech. Starter N was applied at 0, 15, 30, 45, 60 and 75 pounds per acre (lbs/ac). Soil tests prior to seeding were 39 lbs/acre in 2015, 56 lbs in 2016 and 45 lbs in 2017 in the top two feet sampled. Results are still being analyzed, but Brar has preliminary data on three-years of nodule counts and two years of yield data.

In two of three years, as starter N increased, nodule counts at R1 decreased significantly at the higher N levels. However at R5, only the highest N rate decreased nodulation. In 2016 and 2017, N uptake by the soybean plants were not significantly different. In 2015, the highest N rate had higher N uptake. However, no difference in grain yield was observed in 2015 and 2016. No differences in protein content were found, either.

“The research is helping to rule out the inputs that do not contribute to increased yield,” Lawley says.

“Essentially, the response at Indian Head to nitrogen was similar to an inoculant failure.  If you do a good job of inoculation, there is no reason for starter N,” Holzapfel says.

Holzapfel says the 2017 yield results will be interesting. Growing conditions in 2015 and 2016 were very good for soybeans, but 2017 was drier and more of a struggle. The nitrogen treatments did increase soybean height and vegetative growth, but whether that translates into yield is still being analyzed.

Nitrogen uptake slow to occur in soybean
An explanation of why starter N is not beneficial with good inoculation may be that uptake of N by soybean plants is slow to occur until the reproductive stages. In 2005, John Heard with the soils and crops branch of Manitoba Agriculture, Food and Rural Development, looked at the timing of uptake of primary and secondary nutrients and where those nutrients accumulated in the plant.

“However, we do recommend growers assess nodulation of soybeans, and if for some reason nodulation is unsuccessful, supplemental nitrogen should be applied. Studies have shown delaying application of 50 to 100 lbs N/ac until early pod fill is more effective than earlier applications.”