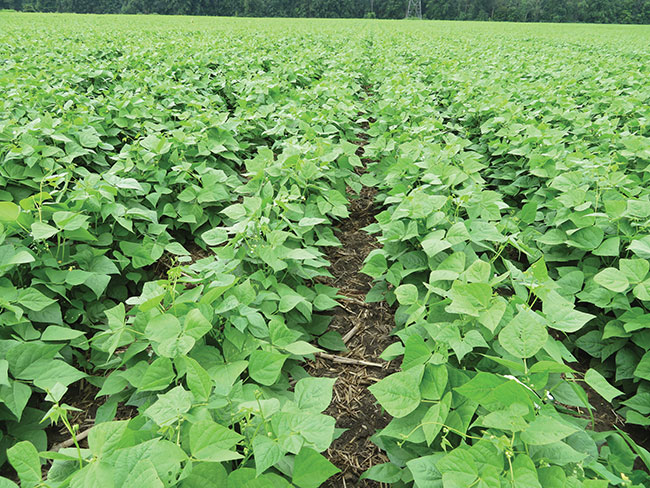 A few years ago, microbiologist Ivan Oresnik learned from Manitoba Agriculture’s provincial pulse specialist Dennis Lange that dry bean growers usually apply nitrogen fertilizer to this crop rather than relying on rhizobial inoculants. As a rhizobia expert, Oresnik’s off-the-cuff response was: “We should be able to fix that.”

Excitingly, proof-of-principle experiments by Oresnik and his research group at the University of Manitoba indicate that there could indeed be an easy solution to this longstanding issue in dry bean production.

As legume growers know, rhizobia bacteria have the ability to form nodules on the roots of a compatible legume host and to convert nitrogen from the air into nitrogen compounds that the host plant can use. However, dry beans are usually much poorer at nitrogen fixation than most legume crops, so they need nitrogen fertilizer to produce good yields.

“Improved nitrogen fixation would allow bean growers to use less fertilizer, which could reduce their input costs. And it would decrease the risk of nitrogen losses to the environment, which can have effects ranging from greenhouse gas emissions to eutrophication [excessive nutrient levels] in water bodies,” Oresnik says.

Better and better rhizobial variants
His research usually looks at rhizobia from an academic perspective, focusing on their molecular microbiology, rather than investigating agricultural applications. But after talking with Lange, he started delving into the published research on rhizobia in dry bean production.

As he read more and more about it, he began to wonder if it might be impossible to develop better rhizobial strains for dry bean.

However, Oresnik had an idea: he knew that some researchers were using adaptive evolutionary approaches to improving organisms and he thought such an approach might work with rhizobial strains. Adaptive evolution refers to the tendency for beneficial traits to become more frequent in a population as the environment selects for those individuals in each generation that are best able to survive, thrive and reproduce.

Oresnik explains that naturally occurring mutations develop in bacteria because of mistakes during their reproduction. He thought that, in rhizobia bacteria, some of these mutations could result in better nitrogen fixation through adaptive evolution. Furthermore, he thought this adaptive process could be helped along if you specifically selected rhizobial variants with superior nitrogen fixation for the next generation.

So, Oresnik led a proof-of-principle study to see if this approach would work.

In this greenhouse experiment, Oresnik and his research group used a strain of Rhizobium etli called CFN42. Rhizobium etli is the main rhizobial species that nodulates with bean plants. CFN42 is a well-known, agriculturally important strain that has been studied by scientists. As well, CFN42’s genome has been sequenced, so its genome could be compared with the genomes of any better-performing variants that might be developed through the experiment.

The first step in the experiment was to inoculate Envoy navy bean plants with CFN42 and then grow the plants under nitrogen-deficient conditions. That resulted in plants with yellowish green foliage and tiny, ineffective-looking nodules scattered over their roots.

“An effective rhizobium nodule is big and spherical and it has a pink tinge. If the nodule is small and not pink, then it is not really fixing nitrogen,” he explains. “And it’s easy to tell whether a bean plant is nitrogen-deficient or sufficient. If it is nitrogen-deficient, the plant goes a completely pale, pale yellowish green. If it has enough nitrogen, then it’s dark green.” So CFN42 had some interaction with the plants but it did not result in effective nitrogen fixation.

Next, Oresnik’s group selected the largest of the tiny nodules, crushed them, and used them to inoculate a new set of Envoy plants. They repeated this step for about eight cycles.

“By the time we did this step about three times, we began getting nodules that were looking pink and bigger,” he says. “Somewhere around cycle five, we were starting to get large, effective-looking nodules that were clustered on the roots right below the crown, and the plants looked really healthy and green. The change was very striking.”

To confirm these results, they replicated this whole process three times, starting with inoculation of CFN42 and going through eight cycles of selection. Each time, they ended up with large, effective-looking nodules and healthy, green plants.

These 28-day-old bean plants were grown in nitrogen-deficient conditions. One plant was simply inoculated with CFN42 (left), and the other has a rhizobial strain adaptively evolved from CFN42 (right). 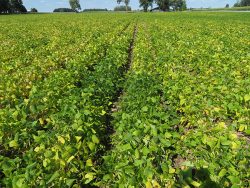 In additon to developing more effective rhizobial variants for bean growers, Oresnik is working to understand why they are more effective in a second component of the project. Photo by Top Crop Manager.

Local rhizobia could be better
So, under greenhouse conditions, they have proven that it is possible – and surprisingly easy – to develop more effective rhizobial variants in this way.

“From an academic perspective, I am really excited, because no one has ever selected [for rhizobial strains] in this way,” Oresnik says.

In 2020, Oresnik and his group will be starting the next stage of this research. They will be using the same multi-cycle selection process, but they will be working with local rhizobia.

“CFN42 was originally isolated in Mexico. I suspect this strain may not work well in the field here,” he explains. “So, I want to test rhizobial strains collected more locally, because they are more likely to be better adapted to our environment and more competitive.”

These local rhizobia may not necessarily be Rhizobium etli. He notes, “Beans are relatively promiscuous when it comes to rhizobial interactions. A number of different species can sort of work with beans, including Rhizobium phaseoli, Rhizobium etli, Rhizobium tropici, Rhizobium gallicum, and Rhizobium giardinii, and some species of Bradyrhizobium.”

And there could be other rhizobial species or subspecies that also work with beans. “All rhizobial species have up to maybe 40 per cent of their genetic component in very large plasmids [packages of DNA]. And a lot of the genes necessary for nitrogen fixation as well as the genes for nodulation tend to be on plasmids that can be mobile, so they can move from one bacterial species to another. So, it becomes very hard to tell what is and what isn’t a different species. For instance, you can move one plasmid into a Rhizobium phaseoli and it will work fine on peas.”

Oresnik will also be trying to make an additional improvement in the rhizobial variants through the multi-cycle selection process. “I want to see if it is possible to evolve strains that can be effective at lower temperatures, in an effort to allow earlier planting/inoculation.” Sometimes it can take several weeks after seed germination before the rhizobia are able to start fixing nitrogen, especially under stressful growing conditions like cold temperatures. If the rhizobia could start fixing nitrogen sooner, the young crop might get off to a stronger start.

As soon as Oresnik and his group have developed some rhizobial variants that perform well on bean plants in the greenhouse, they’ll test those variants in the field. The goal is to identify the variant that is most effective at fixing nitrogen and boosting bean yields under Manitoba conditions.

Along with developing more effective rhizobial variants for bean growers, Oresnik also wants to understand why they are more effective.

“As a second component of the project, I want to determine what kind of mutations are occurring to allow the bacteria to become better at nitrogen fixation. That could increase understanding of some of the mechanisms of the plant-microbe interaction.” So, he will be sending some of the original strains and their variants for genomic sequencing.

The Manitoba Pulse and Soybean Growers are funding this research, along with some support from the Natural Sciences and Engineering Research Council of Canada.

Larger implications
Oresnik’s approach to developing more effective rhizobial variants has the potential to be much easier and faster than breeding bean plants that are better at fixing nitrogen – especially since nitrogen fixation in legume plants is controlled by many different genes.

“The plant breeding process takes a long time. If I’m right about this method – and I think we’ll know that when we start figuring out what the actual mechanisms are – then microbiologists could collaborate with bean breeders, working with the breeders’ penultimate lines before commercial release. They could possibly very quickly come up with inoculum tailored for each specific bean variety,” he notes.

“And I think we should be able to apply this same approach to rhizobial inoculants for new lines of all legume crops. This would improve the effectiveness of biological nitrogen fixation for all these crops and further enhance the sustainability of legume crop production, benefiting growers and the environment.”