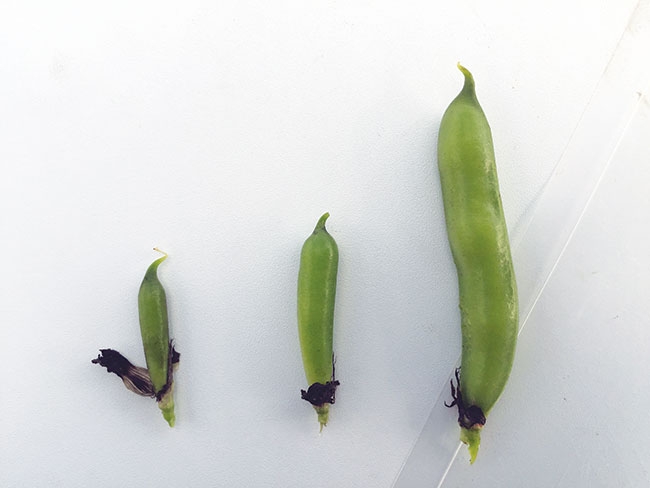 “One of the areas of interest is around seeding rates for fababeans, which come in a wide range of sizes,” explains Jessica Pratchler, research manager for Northeast Agriculture Research Foundation (NARF) and graduate student in Steve Shirtliffe’s program at the University of Saskatchewan. “There are two main market classes of fababean: tannin varieties that are generally large seeded, have a coloured flower and targeted to the human consumption market; and zero tannin varieties, which are generally smaller seeded, have white flowers and targeted to the livestock feed market. However, even within these two classes, there is a range of seed sizes. Due to this variation in seed size, we wondered if the different seed size classes of fababean require different seeding rates.”

Pratchler started her three-year project in 2015 with an objective to identify the optimal seeding rate for various fababean varieties in order to maximize yield and quality while reducing logistical issues. The current seeding rate recommendation is 44 plants per square metre (/m2) for all varieties. The challenge is primarily with the larger seeded varieties, as the current seeding rates can represent considerable logistical issues. In 2015 and 2016, trials at Saskatoon and Melfort compared three varieties CDC SSNS-1 (smallest seeded), CDC Snowdrop and FB9-4 (largest seeded) at 20, 40, 60, 80 and 100 viable seeds/m2. Other trials at Indian Head, Outlook, Scott and Swift Current, Sask., grew a single variety, CDC Snowdrop at the different seeding rates. All other agronomic treatments were the same.

“The growing conditions in 2015 and 2016 were fairly wet, so early results weren’t showing much difference in response among the different seeding rates,” Pratchler explains. “The wetter conditions meant all of the varieties produced a lot of biomass, so even at the lower seeding rates, the plants had more room for branching and growth. Therefore, in 2017, we changed the seeding rate treatments to see if we could get a better response. We compared the three varieties, CDC SSNS-1, CDC Snowdrop and FB9-4 at all five sites at five, 10, 20, 40, and 60 seeds/m2. The conditions in 2017 were more variable and drier during the growing season, and we did actually see a more typical yield response when we compared the data at the different seeding rates.”

Although Pratchler is still finalizing the results from across the 18 site years of data collected over three years, there are some interesting preliminary results to share. “Based on the preliminary data, the best seeding rate under wet or average Saskatchewan growing conditions is 40 seeds/m2. Under irrigation, there is some promise that rates could be bumped up to 55 seeds/m2. Under really dry conditions, such as at Swift Current or Indian Head, there may be some promise to increase the seeding rates a bit to help address the dry conditions. With the larger seeded varieties, it appears that the rates could be reduced to rates closer to 20 seeds/m2, but we are still finalizing the data to determine what that rate should be for optimal yield and economics. Weed control is important, and with smaller varieties such as CDC SSNS-1 the plants are also a bit smaller, so under weedier conditions seeding rates of 44 plants/m2 is recommended. However, higher seeding rates may not be an economical method of weed control.”

In 2016, an undergraduate student in Shirtliffe’s program conducted a one-year trial with a large seeded fababean variety comparing two planting options, a Monosem Singulation Planter and a Fabro Disk Seeder. The objective of the trial was to determine if the Monosem Singulation Planter, a vacuum-type planter used for corn production, may help solve logistical issues and allow for decreased seeding rates. The treatments included seeding rates of 10, 20, 40, 80 viable seeds/m2 using the two different types of planters.

“Although these results are from one year only, the early indications are that the vacuum type planter resulted in more equally spaced plants and significantly better yields at lower seeding rates,” Pratchler adds. “There is interest in expanding and continuing this research to determine the optimal seeding rates and yields. The one-year results showed that maximum agronomic yield can be achieved at seeding rates of 20 seeds/m2 using the vacuum planter. As well, yields with the vacuum planter were about 1.5 times the yields of the disk air seeder. Further research is needed to determine the accuracy of this response across environmental conditions.”

Fababean research will continue to be a priority. Pratchler adds that growers particularly in the northeastern part of Saskatchewan prefer to grow the larger seeded varieties because of the market options. In a good year, they can go into the higher value food market, or they can go into the feed market if necessary. Pratchler expects to have the final analysis and results available from her graduate research in 2018 and will share the final results, which will include final seeding rate recommendations for the various class sizes.