Features
Growing soybeans on the Prairies

Saskatchewan researchers are looking to improve short-season soybean varieties and their profitabilty. 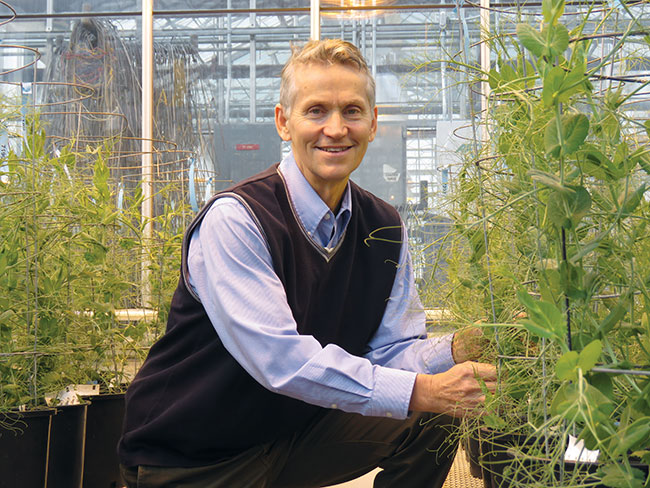 Tom Warkentin, soybean breeder and professor in the department of plant sciences at the University of Saskatchewan. Photo courtesy of Tom Warkentin.

Soybeans have been grown in Eastern Canada for many years, and the crop is now gaining popularity among farmers in the West. However, there are challenges involved in adapting the crop to the shorter, colder, and drier growing seasons on the Canadian Prairies.

In Saskatchewan, where soybeans first emerged as a new crop rotation option about 10 years ago, researchers are working to gain a better understanding of short-season soybeans and which varieties may be better suited to growing conditions on the Prairies. The goal is to make soybean production more consistent and profitable for Western Canadian soybean producers.

One of the questions being examined is why short-season soybean varieties have a lower percentage of seed protein than their longer season counterparts. Diane Knight, a professor in the College of Agriculture and Bioresources at the University of Saskatchewan, is looking at nitrogen fixation as a possible reason why.

“It may be that that the growing season [in Saskatchewan] simply isn’t long enough for the plant to acquire the amount of nitrogen that it needs for protein development,” she says.

Knight notes some research from the United States indicates that nitrogen found in soybean seed protein preferentially comes from biological fixation and not from fertilizer put down with the seed.

According to Knight, it takes more energy for a soybean plant to fix nitrogen than it does to take it up, so one of the things she’s studying is whether there’s sufficient time for short-season soybeans to attain enough nitrogen through biological nitrogen fixation (BNF) for optimal protein development.

For her research, Knight is looking at the impact of cold temperatures on BNF in soybean and how nitrogen uptake rates differ for different growth stages. She is also examining root nodules of soybean plants to see what types of nitrogen-fixing rhizobia are present there, and whether they’re coming from applied inoculant or naturalized populations.

“One of the things we’re trying to do is figure out whether or not some of these varieties are better than others [at nitrogen fixation], and if so, why are they better,” Knight says. 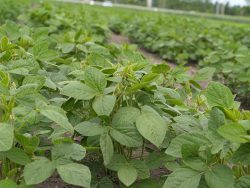 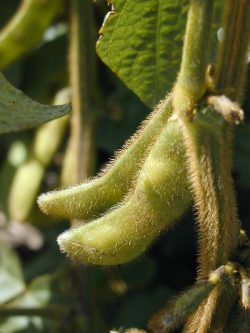 Short-season soybean plant with pods in a research field at the University of Saskatchewan.

Another soybean project being led by Rosalind Bueckert, a professor in the department of plant sciences at the University of Saskatchewan, is assessing the effect of cool temperatures and abiotic stress on yield formation in a range of soybean varieties suited to very short seasons.

This research is aimed at identifying traits for varietal improvements to better equip short-season soybeans to beat the cold.

Tom Warkentin, a professor in the department of plant sciences at the University of Saskatchewan who specializes in pulse crop plant breeding and genomics research, has been working with AAFC soybean breeders for the past decade to develop new varieties suited to northern soybean areas like Saskatchewan.

For his current project, which began in 2018 and concludes in 2023, Warkentin is collaborating with Elroy Cober at the AAFC’s Ottawa Research and Development Centre and Louise O’Donoughue from CÉROM, a grain research program based in Montreal.

Their goal is to produce high-yielding, early maturing soybean cultivars suited for production in northern latitude regions and to validate early maturity gene performance to improve the breeding process for short-season varieties.

“We’re in the early stage of this particular round,” Warkentin says. “We have good breeding lines that are showing promise, and we plan to release varieties in the not-too-distant future.” 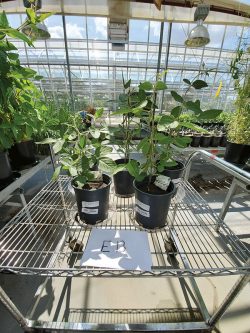 Short-season soybeans being trialed in a greenhouse at the University of Saskatchewan. Photos courtesy of Sharon Hankey. 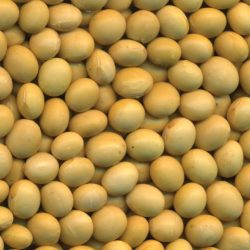 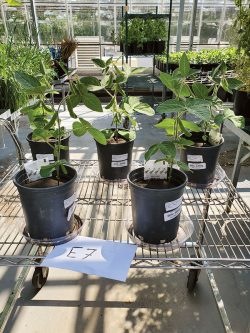 Short-season soybeans being trialed in a greenhouse at the University of Saskatchewan. Photos courtesy of Sharon Hankey.

Warkentin believes having soybeans that are especially well-adapted to the Prairie climate is particularly important in Saskatchewan.

“Soybean is a crop that tends to have a narrow adaptation, so through breeding over the last hundred years, breeders have selected shorter duration varieties and as they have done that, the crop has moved north from the southern U.S., to the central U.S., to the northern U.S., to Canada,” he says.

“To make soybean adapted to Saskatchewan, we need even shorter duration varieties than what are needed in the Red River Valley of Manitoba.”

Warkentin maintains having soybeans that are particularly well-adapted to the Prairie climate will no doubt benefit Western Canadian farmers.

“Crop agriculture in the Canadian Prairies is heavily based on wheat and canola. Healthy crop rotations need more than two crops, and soybean is another option to go from two to three,” he says.

“Another benefit is that soybean, along with other pulse crops, fix nitrogen, and that’s desperately needed . . . to make agriculture more sustainable,” he adds. “Neither wheat nor canola fix nitrogen, but soybean does. We need more N-fixing crops for a proper rotation in this region.”

Knight agrees that there’s much interest in diversifying crop rotations to include soybeans in Saskatchewan and other Prairie provinces, and she maintains one reason soybeans have become more attractive to farmers is because of the relatively high value of the crop.


Related
Use bin-run soybeans at your own risk
Another dimension of canola-pulse rotational combos
Do you need to inoculate your soybeans every year?
The best planting dates and soil temperatures for seeding soybeans