Quebec’s agriculture minstry and IRDA are updating a soil health survey from 1990 to have province-wide soil health information. 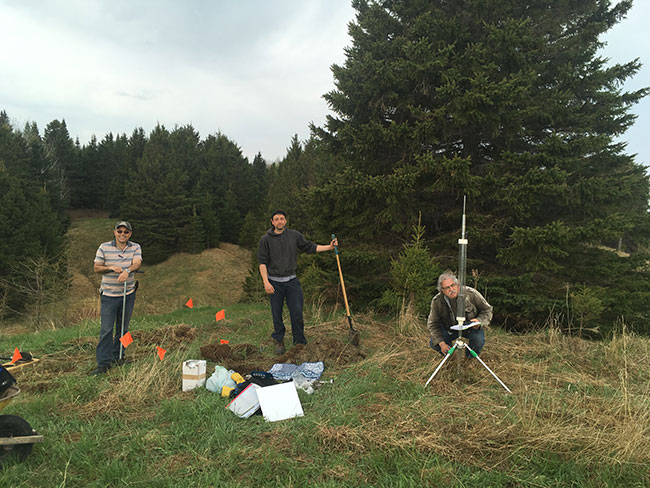 Field teams were asked to sample soils to evaluate biological, physical and chemical properties in the lab, as well as visual qualitative analysis. All photos courtesy of Marc-Olivier Gasser.

The study, which began in 2017 and will conclude in late 2022, is run by the Institute for Research and Development in Agri-Environments (IRDA), a non-profit research organization whose mission is “to engage in agri-environmental research, development and transfer activities that foster agricultural innovation from a sustainable development perspective.”

Marc-Olivier Gasser, a soil and water researcher at IRDA and the project’s lead, says the study will analyze soil health conditions in 426 producer fields across the province.

Gasser says MAPAQ ran the first project of its kind in 1990, but the survey needed an update.

“They were hearing from producers, extension agents and crop advisors that they could see some soil health issues in some places, but the information is scarce and not systematic, and this is the first reason they wanted to get a portrait of the real state of soil health in 2020,” Gasser says. “They also wanted to find a relationship between soil health and productivity.”

Quebec’s soils are higher in organic matter than soils in other countries, with levels often above four per cent, Gasser says – with the exception of the southern parts of the province where there is more intensive cropping. The study will use previously cultivated soils in undisturbed perennial grassland, hedgerows or under fences that are not physically degraded as its benchmark for healthy soils.

“In the 1990 inventory, soils in cultivated grasslands were used as benchmark soils but were not necessarily in optimal condition physically. However, they saw improvements compared to monoculture,” Gasser says.

Once Gasser and his co-researcher Claude Bernard have analyzed the data, they will make recommendations on soil management and conservation strategies, and MAPAQ will set priorities for promoting specific interventions.

“Healthy soil is soil that can support life – in the soil and the people and fauna who depend on it,” Gasser says. “It is a difficult task to establish soil health parameters. Soil health as a term relies on so many properties – physical, chemical and biological. It is a challenge to assess.” 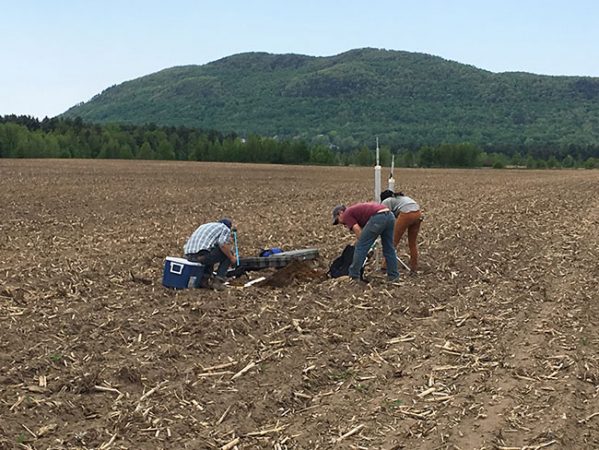 Composite soil samples were taken at three soil depths in each field. All photos courtesy of Marc-Olivier Gasser.

Study design and next steps
Soil sampling took place in 2018 and 2019. Gasser says the teams in the field were asked to sample soils to evaluate biological, physical and chemical properties in the lab; they also conducted visual qualitative analysis of soil profiles.

Composite soil samples were taken at three soil depths in each field: two samples from the Ap horizon (the surface level of soil that is normally ploughed) – one in the top 10 centimetres at the surface and the second deeper, depending on the depth of the Ap horizon; and one sample from the first 15 centimetres in the B horizon, or subsoil layer.

Prior to soil sampling, the farmers were asked to complete a questionnaire and provide field histories dating back five years for fields with sampling sites. They were also asked for their perceptions on field and soil qualities.

Data analysis is ongoing, but Gasser says results should be made available in late 2022. Initially, results will be published through MAPAQ; two to three reports are planned and the team is also looking at other knowledge transfer activities.

But the study should yield practical solutions, too.

One planned project will take soil aggregate photographs and pair them with the study data so producers can take samples from the three soil horizons and analyze soil health parameters using a mobile app and image analysis.

“We have the intention to use a lot of other new techniques to measure soil quality and evaluate soil properties,” Gasser says. “These should be a lot cheaper than conventional laboratory soil assessments, but they need to be calibrated, and this study gives us a good soil database to do it at low cost. So there are new tools that should result from this study.”

Note: Claude Bernard has published an initial report based on the data gathered from the study that looks at the movement of soils using isotopes of the chemical element Cesium. The report can be found on the IRDA website at www.irda.qc.ca/en/publications/.