Features Agronomy Soil
Mining the soil for data: The impact of cropping systems on soil health

While the benefits of cover crops for soil health have long been touted by extension staff, it’s been difficult for researchers to determine how exactly cover crops affect the soil. That is until now. In 2016, an elaborate soil health monitoring system – the first of its kind in North America – was installed at the Elora Research Station, near Guelph, Ont. 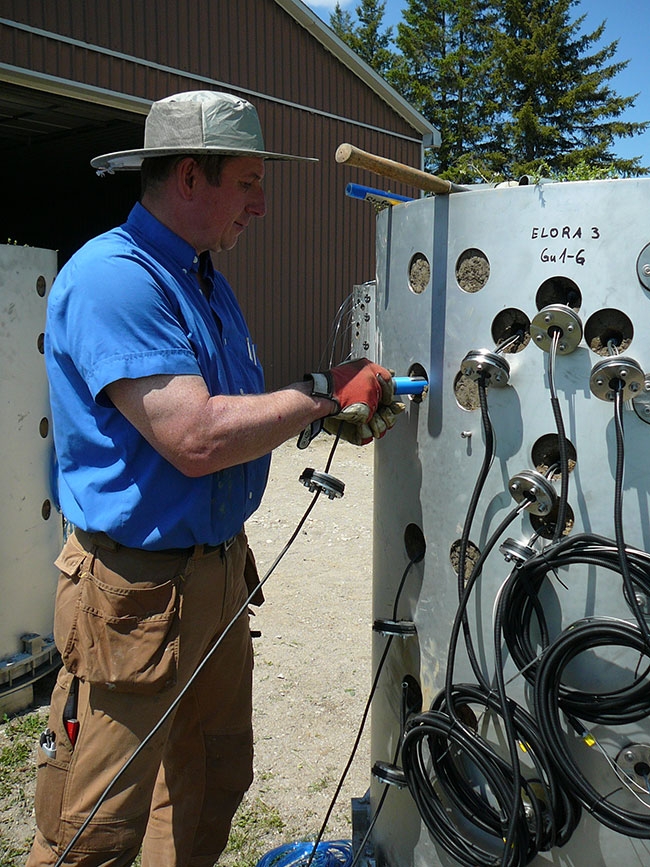 A technician installs sensors into the lysimeter. While the benefits of cover crops for soil health have long been touted by extension staff

Prior to installation, 18 soil columns were outfitted with multiple sensors at multiple depths for sampling soil water, nutrients and greenhouse gases. The measuring devices, called lysimeters, will be used to compare the environmental impact of two different long-term cropping systems. A conventional (non-diverse) corn-soybean rotation will be compared to a diverse rotation where cover crops and intercrops are included in a corn-soybean-wheat rotation.

Lead researcher Claudia Wagner-Riddle, from the University of Guelph’s School of Environmental Sciences, says the instrumentation in these soil columns will permit researchers to monitor everything going in and out – something they could not do at the field scale without lysimeters. She notes there have been hypotheses that cover crops improve soil organic carbon levels, soil aggregation and soil structure, resulting in better moisture retention, but without lysimeters these effects have been difficult to quantify.

A 30-year comparison at the Elora Research Station, spearheaded by Bill Deen with the University of Guelph’s department of plant agriculture, ran from 1982 to 2012 and showed improved yields with increasing crop rotation complexity, but overall, there has been a trend towards decreasing crop diversity in Ontario. This lysimeter project will enable researchers to capture detailed data to measure the benefits of cover crops over time, Wagner-Riddle says.

In addition to evaluating how cropping systems impact soil health, the project will also measure the impact of crops on soil ecosystem services. These are the benefits to society, such as increased carbon sequestration, reduced nutrient leaching and reduced greenhouse gas emissions.

The first year was used as a baseline to ensure the equipment was operating properly. With almost 500 sensors, Wagner-Riddle says there was quite a learning curve. This year soybeans were planted on the “conventional rotation” lysimeters, and wheat, which will be followed by a cocktail cover crop mix of five or six species, was planted on the other. Over the coming winter, the conventional treatment will be bare, while the other will be in a cover crop.

Managing the data is one of the biggest challenges of the research trial. “We are producing so much data,” Wagner-Riddle says. “We must stay on top of quality control.”

The sensors in the lysimeters automatically take measurements of soil water content, soil matrix potential (how tightly the water is held), temperature, and carbon dioxide and nitrous oxide concentration at five depths: five, 10, 30, 60 and 90 centimetres from the soil surface. The measurements are taken at set time intervals. Water samples can also be taken manually and sent to a lab for analysis.

Two soil types will also be compared in the long-term trial. Half of the soil cores are one metre in diameter by 1.5 metres deep and contain an undisturbed silt loam from Elora. The others contain a sandy loam that was carefully extracted and transported intact from a research farm near Cambridge, Ont.

By taking a multidisciplinary approach that considers soil microbiology and the underlying mechanisms operating in the soil under different cropping systems, the researchers will be able to get a more complete picture of what is happening in the soil. Some of the questions they hope to be able to answer include: Are diverse cropping systems also beneficial for air and water quality? Are there trade-offs between soil, water and air quality upon implementing a diverse cropping rotation with a focus on carbon and nitrogen cycling?

And by manipulating some of the lysimeters to simulate warmer winters and summer droughts, the plots can also be used to compare the resiliency of ecosystem services to climate change in the conventional versus diverse cropping systems. For example, the researchers hope to be able to estimate how warmer winters would impact nutrient losses.

In addition to the vast quantity of detailed data collected, the project is also unusual in that, from the start, it is intended to run for 10 to 15 years.

Wagner-Riddle says this is important when it comes to measuring changes to soil health. “It’s not something you can see from one year to the next. You want to go through a few cycles of the rotations to see the dynamics and how it changes over time,” she explains.

While this experimental set-up is new to North America, there are 180 of these lysimeters already in use in Europe. Wagner-Riddle says information is being shared between these projects for maximum benefit.

A Soil Health Interpretive Centre, located near the lysimeter trial at the Elora Research Station, will showcase the study results and other soil health research results. The exhibits will be targeted to specific audiences, such as students or conference participants, Wagner-Riddle explains. She adds that the centre will be open for specific events and not on a drop-in basis.

This research was made possible by the efforts of many funding partners.

Research being conducted at the site is funded by Grain Farmers of Ontario, the Ontario Ministry of Agriculture, Food and Rural Affairs (OMAFRA) and the University of Guelph, and the Natural Sciences and Engineering Research Council of Canada strategic research program.

The Soil Health Interpretive Centre is funded by the OMAFRA-University of Guelph knowledge translation and transfer program and is a collaboration with the Ontario Soil and Crop Improvement Association and Hoskin Scientific.