Features Agronomy Irrigation
Putting the moisture where it counts 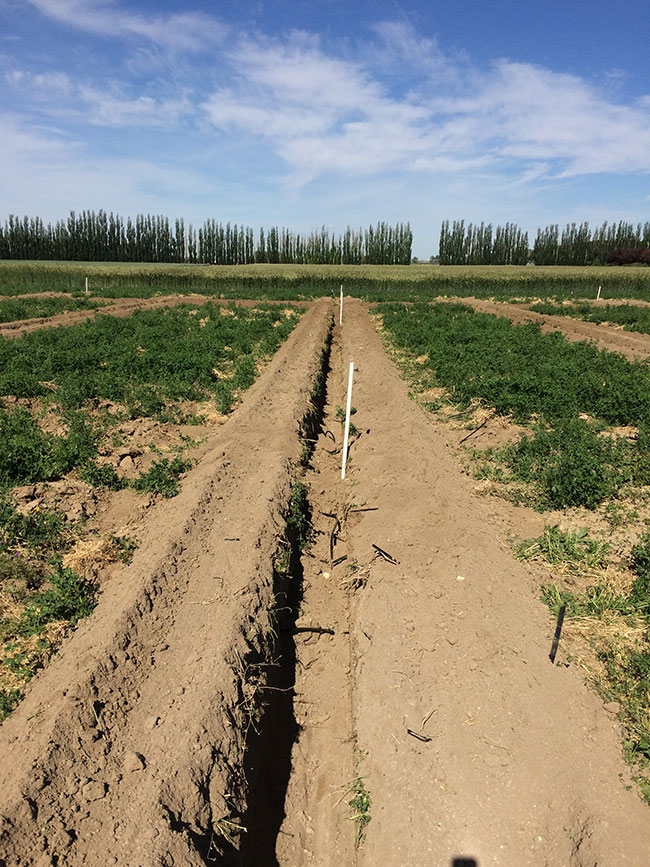 “That’s when I decided to try it on my own place,” Plett says, who farms near Gem, Alta. “I have a little trouble on my soil getting the water to come up to the surface for germination, so that was one concern I had. But in Texas I saw there was moisture there for germination when it was managed right.”

Plett installed a drip irrigation system on a test plot in 2013, and since then he’s grown wheat, hemp, fababeans and alfalfa seed under drip irrigation. Although only approximately 70 acres of Plett’s land is irrigated using SDI, he says if he didn’t have it, he would be far more stressed.

So far, Plett is one of only a few farmers to adopt SDI in Alberta, but interest is growing.

New research
Leonard Hingley, a soil and water specialist with Alberta Agriculture in Brooks, Alta., has been working on an SDI study for the past two years. His project, which uses an SDI system designed and installed by Southern Irrigation, began as a way to manage irrigation in alfalfa seed.

“We wanted to give alfalfa seed producers an indication of how they could target the crop’s water use requirements,” he says. “This is more difficult with alfalfa seed because you’re trying to stress the plant enough so that it’s producing flowers which in turn increases seed production in the fall, but not stressing the plant so much that it is dying, or irrigating so much that you produce a forage crop.”

That point is just above the wilting point, but isn’t yet known, Hingley says.

The biggest reason Hingley’s team wanted to use SDI was leafcutter bees: sprinklers suppress bee activity and drown bees. “We thought if we could eliminate the impact of irrigation on bee activity, our research would provide a truer response to the irrigation treatments themselves.”

In the second year of the study, the largest yield response came from the fourth treatment – 50 per cent irrigation for the full season until cut-off (August 23) – but Hingley says that producers should be cautious applying these results to their operations until further research can verify these initial findings.

This winter, Lethbridge College and Southern Irrigation are partnering on another, indoor study that will compare SDI systems with various flow rates and durations at different depths in three soil types – sandy, loamy and clay.

Willemijn Appels, Lethbridge College’s Mueller applied research chair in irrigation science, says there are a lot of theories about how water moves around individual SDI emitters, but many unknowns in terms of how to best operate full systems for field crops, especially during hot summers like that of 2017.

“To make the system more representative of water demand conditions in the field, we’ll grow alfalfa in each of the bins. We will measure the patterns of moisture distribution with a variety of soil moisture sensors,” Appels explains. “There will also be ample opportunity to test plant water stress sensors that show operational potential, like thermal infrared cameras.”

Southern Irrigation and their supplier, Netafim, collaborated with the college on design and will help execute the project.

Costs and benefits
Frank Oostenbrink, who manages sales and technical design of SDI systems for Southern Irrigation, says the company has 12 to 15 customers in Alberta’s irrigation districts, but as they continue to invest in research and outreach – the company does three or four trade shows per year, as well as field days ­–producers are increasingly interested in the technology.

“A centre pivot system is a circle so you’re always losing the corners. As soon as you put in SDI you get those corners,” Oostenbrink says. “As far as the cost of the system goes, it’s double that of centre pivot, but a lot of producers see the potential. You’ll see the value on some crops more than others.”

Hingley says startup costs for producers interested in SDI are high, but there are major efficiency gains. “Guys are interested in saving on energy costs, because running a pivot is really expensive with delivery, transmission and electrical demand charges. If you can save on energy costs you will find some producers making the change to SDI. This doesn’t mean the crop uses less water with SDI, that doesn’t change, but there is an efficiency gain,” he says.

“You’re around 98 per cent efficient, you’re reaching all the corners of the field, and your disease pressures are lower because the canopy isn’t wet.”

Don Plett installed his SDI system with the help of his wife and neighbours, but Southern
Irrigation offers installation and maintenance services.

Installation “isn’t rocket science,” Oostenbrink says, but proper installation is critical to ensure a successful system. Drip line is installed first about 12-inches deep, followed by main lines, sub mains and a flush header. “But there’s no such thing as a cookie cutter drip system,” he adds.

The company has just hired an agronomist to help with application of fertilizers through drip lines and give advice on specific crops.

“We’re really excited about it,” Oostenbrink says. “Our goal is to give customers something of value.