In the fall of 2016, early snowfall and excess moisture resulted in 2.5 million acres of unharvested crop in fields over the winter, primarily in Saskatchewan and Alberta. Although these unusual conditions happen rarely, taking a look back at the impacts on the 2017 cropping season and some of the lessons learned can be useful. 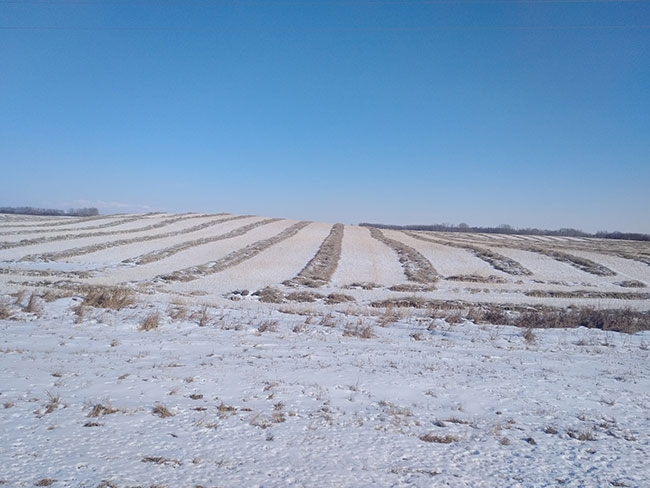 According to Stats Canada, excess moisture in parts of the Prairie region resulted in decreases in crop quality and yields and, as of the end of December 2016, 2.5 million acres remained unharvested. Most of the unharvested acres were in Saskatchewan, reporting 1.3 million insured unharvested acres across the province, and Alberta reporting 960,000 unharvested insured acres, mostly in central, north and Peace regions. In both Saskatchewan and Alberta, crop insurance reports show just over half of the crops were harvested for grain in the spring of 2017. The remaining crops were put to other uses such as livestock feed or silage or grazing, and a portion were abandoned and worked under. The reported payouts for yield and quality loss in Saskatchewan reached $621 million. Alberta reported a total of $94.2 million paid out for 98 per cent of unharvested claims on 800,000 acres considered in production shortfall by mid-August 2017.

“In Saskatchewan, we had crop insurance extensions from across the province in every one of our 21 customer service locations in 2016,” says Darby Warner, executive director of the Saskatchewan Crop Insurance Corporation (SCIC). “The majority of the losses were in spring wheat and canola acres affected by the early snowfall that flattened crops and prevented harvest until the following spring. In some locations, such as Tisdale, Carrot River and Hudson Bay areas, field conditions were too wet to hold farm equipment, making them inaccessible for spring harvest. Some losses were due to high rainfall and diseases such as Fusarium head blight, leaf disease and mold in the Kindersley and Rosetown areas, mostly in lentils, durum and spring wheat.”

Recognizing early the number of farms with extensions on more than 7,000 crops on 1.3 million acres, SCIC brought a team together to develop an extensive planning and communications process to assist farmers in the fall and winter of 2016. “Our goal was to allow producers to manage their farm as a normal business without us interfering,” adds Warner. “We adjusted some of our procedures so the farmers could do their work without waiting for us to get to the farm. We developed an extension communications plan including social media, video messaging and newsletters to industry and producers affected by this. We also made personal phone calls to the farmers to talk about impacts to their individual operations and what their responsibilities were in the process. Crop appraisals including sample grades on those unharvested acres were made in the fall and producers paid upfront so they didn’t have to wait until they harvested in the spring to get paid. If there were any further losses over winter, those adjusted payments were finalized in the spring. We also administer the wildlife loss program and covered any losses over winter, not including disease or quality.”

Overall the main impacts from the overwintered crops were late seeding or an increase in summerfallow acres in 2017. In some areas, conditions were too wet for field equipment, delaying harvest until much later in the season. The good news is there haven’t been any other longer-term agronomic concerns, such as increased disease or pest issues, reported as a result of overwintered crops.

Clint Jurke, agronomy director with the Canola Council of Canada, says the biggest hiccup for 2017 was that some fields didn’t get seeded in a timely fashion, or remained unseeded because of the overwintered unharvested crops. “We didn’t see anything in terms of diseases or agronomic concerns that were a carryover result of the unharvested crops left overwinter. A few fields didn’t get harvested until June or July, so were they summerfallowed, however planting on fallow generates nice crops the next season. Overall, the results from the overwintered canola crops were better than most had anticipated, with grade and yield losses not as bad as predicted, as reported by the Canadian Grain Commission.”

Canadian Grain Commission special canola quality report and annual harvest sample program
The Canadian Grain Commission (CGC) provides a number of services to producers and industry, including an annual harvest sample program, and other special projects, such as the assessment of the impact on the 2016 overwintered canola crops. In collaboration with industry, researchers setup a special project to assess the impact of snowed-in and over-wintered canola on the quality of the 2016 crop. The CGC asked producers and processors to submit canola samples into December and again into the spring of 2017, and are currently reviewing samples for the 2018 season.

“This project, which involved a lot of different people across the industry, presented an opportunity to address some questions from this special cropping situation,” explains Vronique Barthet, program manager (oilseeds) for the CGC Grain Research Laboratory. “We ended up with about 173 spring canola harvested samples in the project. Although this isn’t a large enough sample to make scientific conclusions, the information provides a good indication of what happens to quality under these cropping conditions. The degradation we saw on this sample size is likely similar to what other producers experienced, and may help with managing under similar conditions in the future.”

The report showed that of the 161 spring canola samples analyzed, 55 were graded Canola, No.1 Canada (34.2 per cent), 41 were graded Canola, No.2 Canada (25.5 per cent), 33 samples graded Canola, No.3 Canada (20.5 per cent) and 32 samples graded Sample (19.9 per cent), respectively. The remaining 12 samples were not analyzed because they were too mouldy by the time they arrived at the lab. The 2017 spring canola was mainly downgraded for damage as the seed hulls showed various degrees of discoloration (weathering), and once crushed, the canola seed meal showed an orange tint quite different from the usual pale yellow of the seeds, suggesting the seeds were oxidized. All seeds in the lower grade also exhibited an odour, suggesting the seeds were getting moldy or rancid. It is likely that some producers did not send in samples when they determined that their spring canola seeds were of very low quality. Therefore, the true percentage of 2017 spring canola graded Canola, No. 1 Canada, might be lower than what was found in the research project.

The 2016 CGC canola harvest samples were segregated into four harvest times: August to October 2016 (before the snow), November to December 2016 (after the snow), January 2017 (winter 2017) and April to June 2017 (spring 2017). The analyses showed no statistical difference for oil, protein and chlorophyll contents between the four groups of seed samples. “However, we did see a difference in free fatty acid content averages as a result of oxidation and degradation, which were higher in the samples harvested in December 2016, January 2017 and in spring 2017,” Barthet says. “We analyzed a few of the original samples six weeks later, quickly realizing that even stored in our controlled lab conditions, the samples continued to oxidize and degrade, increasing the free fatty acid levels significantly.”

Barthet adds that although its difficult to draw conclusions, the report shows that there can be a big impact on quality when left overwinter. “The increased degradation we saw in the lab means similar degradation is happening in the field, and possibly quicker as it is not under controlled conditions. Therefore, if producers were able to harvest No. 1 or No. 2 canola in the spring, they would be better to sell and move it as soon as possible, as the quality may degrade the longer the canola is stored. Overall, it is important for producers to recognize the importance and value of submitting crop samples to CGC through the harvest sample program and other special research projects, not only for industry but also for their own specific operation.”

The CGC Harvest Sample Program is a long-standing voluntary and free program for Canadian grain producers. Producers are provided with grade and quality information, which is not only useful for selling grain, but also for understanding the grade and quality in unusual circumstances such as the unharvested 2016 crops and settling insurance claims. About 6,000 producers are currently signed up, and in 2017, CGC tested 14,000 samples of various commodities, mostly from Western Canada.

“Once producers are signed up, we send out a harvest sample kit annually for the crops requested,” explains Twylla McKendry, chemist, analytical services, at the CGC Grain Research Laboratory. “Producers take the samples at harvest, put them in the post-paid envelopes provided and send them to our lab. Once received, samples are graded and analyzed, with results available usually within five to ten business days. In 2017 we started an automated email of results process, which means those signed up with an email address receive an email with the results the day the analysis is completed. Producers benefit from receiving an unbiased third party assessment of the grade and quality of the grain they have on their farm and in their bins. Some producers also use the program to compare different varieties they may be growing on their farm. The information is useful to producers so they know what they have when they go to sell their grain, including any degrading factors such as frost, disease or insect damage. They are better prepared to address grade and quality questions from buyers. Producers not only get their individual crop information, they are also contributing to the overall annual Canadian Crop Quality assessment.”

Producers can send in the samples anytime during harvest up until November 1. However, earlier is better for the CGC; for example, wheat crop composite samples are developed in mid-October for extensive milling, baking and quality analysis. This information is used to provide information on the crop quality and grading, which is important for outgoing crop missions to the various export markets. McKendry adds that during harvest, quality factors such as wheat protein are updated weekly on the website, something that international buyers are interested in and watch closely. The overall Canadian harvest and export quality results are published and available online.

“We encourage producers to sign up and take advantage of this program,” McKendry says. “It is important that producers submit samples annually, whether they have a good quality crop or a poorer quality crop, so we can understand the quality and grade of our Canadian crops every year. This also helps the CGC research team to find new uses and markets for Canadian grain, improve grading and other factors and address specific industry concerns, such as canola quality from the unharvested 2016 crop special project.”

Producers can either signup online or call the toll-free number.