Features Agronomy Irrigation
Making the most of your pivot irrigation

Pivot irrigation is by far the most common method of irrigating crops in Western Canada. 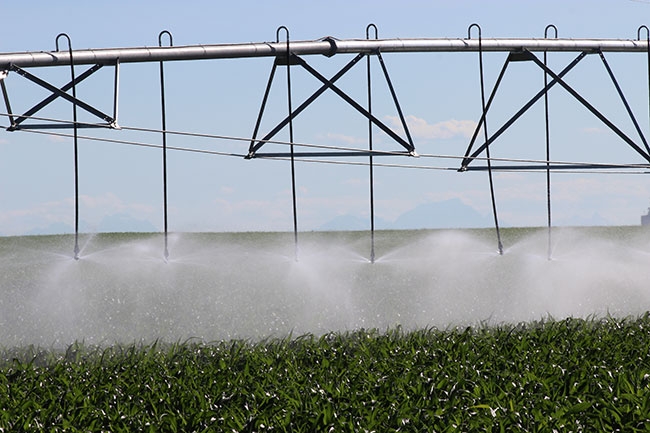 A costly mistake irrigation farmers can make is not applying enough water to keep up with crop water requirements. Pivot irrigation is by far the most common method of irrigating crops in Western Canada.

A costly mistake irrigation farmers can make is not applying enough water to keep up with crop water requirements. Under-irrigating crops results in reduced yield potential. To accurately manage pivot irrigation, it is important to know to how much water your pivot is actually applying.

A common length of pivot is about 1,310 feet (ft) (400 metres), with an end volume gun covering another 50 ft, to irrigate about 133 acres of a 160-acre quarter section. These are commonly referred to as quarter section pivots. It is important to recognize that pivots are not 100 per cent efficient in applying water.

When an irrigation system applies water, a portion of the water applied is lost through evaporation of spray water before reaching the soil, water evaporation from the soil surface and crop canopy, and also by surface runoff when the water application rate exceeds the infiltration rate of the soil. Efficiency is also affected depending on time of day when water is applied. Water application efficiency in hot windy weather at mid-day is much lower than application when air is calm and cool during night time conditions.

When a pivot is initially purchased and set up, it is typically nozzled for a specific water output.  But, in some cases, the actual output may be less than expected if an under designed pump is used. Over time, as nozzles become worn, the water application rate can be affected. An accurate way to know the gross water application of a pivot is to have an in-line flow meter placed either at the pump site or at the pivot point.

Most irrigated crops have an average peak water use in the range of seven to eight mm/day of water. But, peak water use for crops like corn and wheat can be up to 10 mm/day of water when daily temperatures are over 30 C. This was common in southern Alberta in 2017.  In mid-summer, when prolonged hot weather occurs, a 900 gal/min machine may not be able to keep up with daily crop water use. When reviewing the net water applied in Table 2, the range of water applied ranged from 6.0 to 10.3 mm/day for pivots with outputs ranging from 700 to 1,200 gal/min.

Ideally, a pivot must be properly designed and nozzled to keep up with crop water requirements during peak times of water use. If a pivot system cannot keep up with peak crop water use requirements, crop growth and yield may suffer. For example, a 900 U.S. gal/min pivot making a circle in one day will apply about 7.7 mm of net water at 85 per cent efficiency.  (Note: a pivot operating this fast often has a much lower water application efficiency). This application rate should be able to keep up with a crop use rate of seven mm/day. If the crop water use rate was 10 mm/day for one week, the crop would use 70 mm over seven days, but the net pivot output would be 54 mm over seven days. Over a period of several weeks of higher water use, the 900 U.S. gal/min pivot would gradually fall behind crop water use.

It is important to note that assuming that low pressure pivots are always 80 to 85 per cent is too simplistic. The operating speed can make a huge difference in efficiency. The percentage of water loss due to evaporation from the spray, and evaporation from the soil and crop canopy is increased, as the time to make a circle is increased. For example, in Table 3, a 133-acre quarter section centre pivot with a gross water application of 900 U.S. gal/min with an assumed water loss of four mm per application results in an application efficiency of 56 per cent when the pivot speed to make a full circle is one day. If the pivot speed is reduced to making a full circle in three days the efficiency is improved to 85 per cent. It is important to run pivots slow enough to reduce evaporation losses but quickly enough to minimize runoff losses.

To effectively manage pivot irrigation systems, it is critically important to develop a good understanding of the net water application for each pivot system on the farm, monitor your soil water content frequently, and do your best match water application with daily crop water use for best irrigation management.

A costly mistake irrigation farmers can make is not applying enough water to keep up with crop water requirements.