Researchers at the University of Guelph are finding that Ontario crops can benefit from subsurface drip irrigation. The technology (which is relatively new to the province) is a low-pressure, high-efficiency system that uses buried polyethylene drip lines to meet crop water needs by applying water below the soil surface using micro-irrigation emitters. 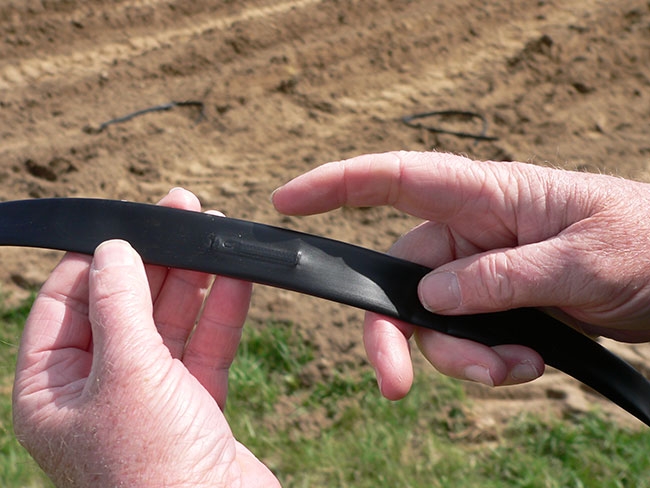 “Subsurface drip irrigation can deliver water with an efficiency of 95 per cent or higher, keep the crop root zone closer to optimum soil moisture and maximize fertilizer use,” says Peter White, a technician based at the University of Guelph’s Simcoe research site and part of a research team that includes Rene Van Acker, John O’Sullivan and Rachel Riddle.

The researchers believe the use of subsurface drip irrigation technology will impact Ontario agriculture in several ways, including: improving water use efficiency with irrigation; preventing evaporation, run-off and soil erosion; and improving nutrient application because of the ability to fertilize crops through the irrigation system – a process called fertigation.

The technology also minimizes the leaching of water and nutrients, reduces water quality degradation and environmental impacts, increases crop yields and quality to sustainable new levels and reduces risk and vulnerability in crop production. There is also additional savings by lowering labour and energy costs by 80 per cent and water use by 25 to 50 per cent.

Studying corn and soybean fertigation
The researchers began studying the effect subsurface drip irrigation has on corn and soybean crops in 2013, after producers lost crops because of drought during the 2012 season.

That spring, with funding from Farm & Food Care Ontario, the University of Guelph installed a 10-plot, 2.5-acre subsurface drip irrigation area at its Simcoe Research Station so they could study corn and soybean fertigation and production. The research also included plots at Judge Farms in Simcoe and Tillvalley Farms in Norfolk County.

“Part of the mandate of the project at the university was to monitor soil moisture so that scientific irrigation scheduling could be used to get the most out of these irrigation systems,” White says.

“With the use of Decagon moisture sensors and data loggers, we were able to set up moisture sensor stations to help decide when to irrigate the Simcoe Research Station plots, as well as at both Judge Farms’ and Tillvalley Farms’ fields, to try to maintain an available soil moisture of 75 to 80 per cent for optimum corn growth,” he added.

Judge Farms’ experience
Judge Farms grows 2,600 acres of corn and soybeans, raises 100,000 broilers a year and has a 2,600 sow operation, in addition to a grain elevator. As a broiler and hog operation, good quality corn is important and after a 75-acre corn crop failure on one of their La Salette locations during the 2012 drought, they decided they needed irrigation available at this location.

While there is a good irrigation pond onsite, the rest of the equipment necessary to irrigate the acreage had to be purchased. After comparing the economics involved in the different types of irrigation systems available, they felt the subsurface drip irrigation system could cover the whole farm for about the same amount of money as the other available systems, but with the potential of using much less labour for irrigation.

After consultation with Vanden Bussche Irrigation, Judge Farms installed a system with a Netafim dripper line with 7/8-inch diameter and 13-millimetre wall thickness and a 0.18 gallon per hour emitter every 24 inches.

“The dripper line was installed 14 to 16 inches deep every 44 inches across the fields using a tractor outfitted with GPS to maintain the proper tape spacing,” White says. “The farm was divided into six different zones and a system of pump, filters, injector, valves, pipes and controller put in place so that the farm could be irrigated two zones at a time and that, if needed, as much as one quarter inch of water a day could be applied to the crop.”

Dollars and cents
The estimated cost to install the subsurface drip irrigation system on Judge Farms was $1,500 per acre. Operating and maintenance costs include $3,000 for hydro from March to October, regular flushing of the system, digging to see wet patterns for moisture profile checks, pond maintenance, 28 per cent fertilizer injection and acid flush to clean and prevent root intrusion. Judge Farms is on a demand metering system, so the watering was done at night during non-peak hours to
save money.

Economic studies show producers need an annual yield increase of 34 per cent to pay for a subsurface drip irrigation system. White says that is possible, citing the average of 40 per cent increase in yields at Judge Farms each year since they installed the system.

“When it’s dry, it makes quite a difference,” White says. “In a wet year, the differences are not huge but there’s still differences attributed to being able to fertilize through the dripline to keep the crop growing.”

White says when determining the irrigation system to use, producers need to keep a number of considerations in mind, including the size and shape of their individual farm, the soil types and availability of water on their farms, the investment into irrigation and the potential return on investment from that and where their farm is in relationship to their day-to-day farming activities.

Next steps
While funding for the project officially ended in 2014, the researchers have submitted another application for additional funding, and White continues to work with producers to put moisture sensors in their fields to collect additional data.