The warm, wet springs of recent years have caused a surprising amount of nitrogen loss from Ontario’s farm fields.

Peter Johnson, provincial cereal specialist with the Ontario Ministry of Agriculture Food and Rural Affairs (OMAFRA), saw the loss first hand during some nitrogen response trials in Elgin County in 2011.

After the nitrogen was applied to the winter wheat around April 20, the conditions turned wet and warm. “We clearly lost half of our early application of 120 lbs of nitrogen, and that level of loss really surprised us,” says Johnson.

Nitrogen loss can have a major impact on final wheat yields. Given Johnson’s disdain for yield losses under any circumstance, it was a logical step to launch a research project to evaluate the impact of stabilized nitrogen on wheat yields.

According to Johnson, denitrification is more likely to cause nitrogen losses from winter wheat fields than leaching or volatilization. The latter is the transfer of nitrogen as ammonia gas from the soil surface to the atmosphere.

Denitrification is the conversion of nitrate to nitrogen gas or nitrous oxide, which escapes to the atmosphere. The conversion is done by bacteria and occurs when soil is depleted of oxygen.

“And in really saturated soil conditions, if there’s a skiff of water on the soil surface, you can actually see the bubbles of the gas coming off,” says Johnson. “That’s lost to the atmosphere and we don’t get that back.”

Cool temperatures in the spring can minimize the losses. But Johnson says that under warmer weather, such as the conditions experienced in the last two or three years, the N losses can reach up to four or five per cent per day from saturated soils.

“Going back to my 2011 example – warm soils and basically 10 or 14 days of saturated soil – if we lose four or five per cent per day, you can see where half the N could actually be spun off,” says Johnson. “The more prone your soil is to sitting saturated, the more likely it is you’re going to have losses to denitrification.”

The process reared its ugly head again in 2014 when some growers thought their wheat was hit by a virus. When the virus didn’t go away, a crop consultant took some tissue samples for analysis. Sure enough, the samples were significantly deficient in nitrogen even though the farmers applied 135 lbs of N.

“But they did it in one application and they did it early,” says Johnson. “And that crop sat saturated for a significant portion of time.”

In an effort to test some products aimed at reducing nitrogen losses, Johnson and his technician, Shane McClure, set up field trials in 2013. They tested Agrotain Plus, which contains a urease inhibitor that can reduce nitrogen loss from ammonia volatilization from urea and dicyandiamide (DCD), which slows the conversion of ammonium to nitrate that, in turn, can further limit nitrogen loss from denitrification.

Three replicate field-scale trials were conducted at seven sites in 2013, the first year of the study. The two treatments consisted of UAN with Agrotain Plus, and UAN without Agrotain Plus. The results were disappointing as the average yield response was actually negative, with yields ranging from a loss of 5 bu/ac to a gain of 2 bu/ac.

While one year of research is too early to draw any conclusions, Johnson says a key lesson learned was that Agrotain Plus should not be added to nitrogen applications in May after the crop enters its rapid growth phase.

“If it’s May 13 and I’m putting on nitrogen because it’s been too wet to get onto the wheat field, at that point Agrotain Plus is a negative because it prevents some of that rapid release of the N,” says Johnson.

In 2014, the second year of the program, the researchers are testing the idea of early applications of Agrotain, or the first application of a split-nitrogen application program.

As for the third year of the study, Johnson would like to take it one step further and not only test the Agrotain Plus, but test DCD separately, as well as nitrapyrin, another denitrification inhibitor.

The idea is to come up with a more cost-effective solution.

“One of the challenges is that Agrotain Plus costs about 12 cents per pound of N,” says Johnson. “I can lose 20 per cent of my N and have been better off to have bought more N than the Agrotain Plus.”

Furthermore, Johnson would like to do more research that is focused on the impact of using just the denitrification inhibitors on heavier soils.

He figures the DCD and nitrapyrin inhibitors, at an estimated cost of six cents per pound of N – or roughly 10 per cent of the cost – can pay for themselves.

“If I get three saturated days at warm soil conditions, I can get close to a 10 per cent loss of N,” says Johnson. “If I get to the fourth day, I can go over a 10 per cent loss. Now all of a sudden, on risk-prone soils, I think those denitrification inhibitors could actually pay a good return to the producer, and that’s where I would like to look next.” 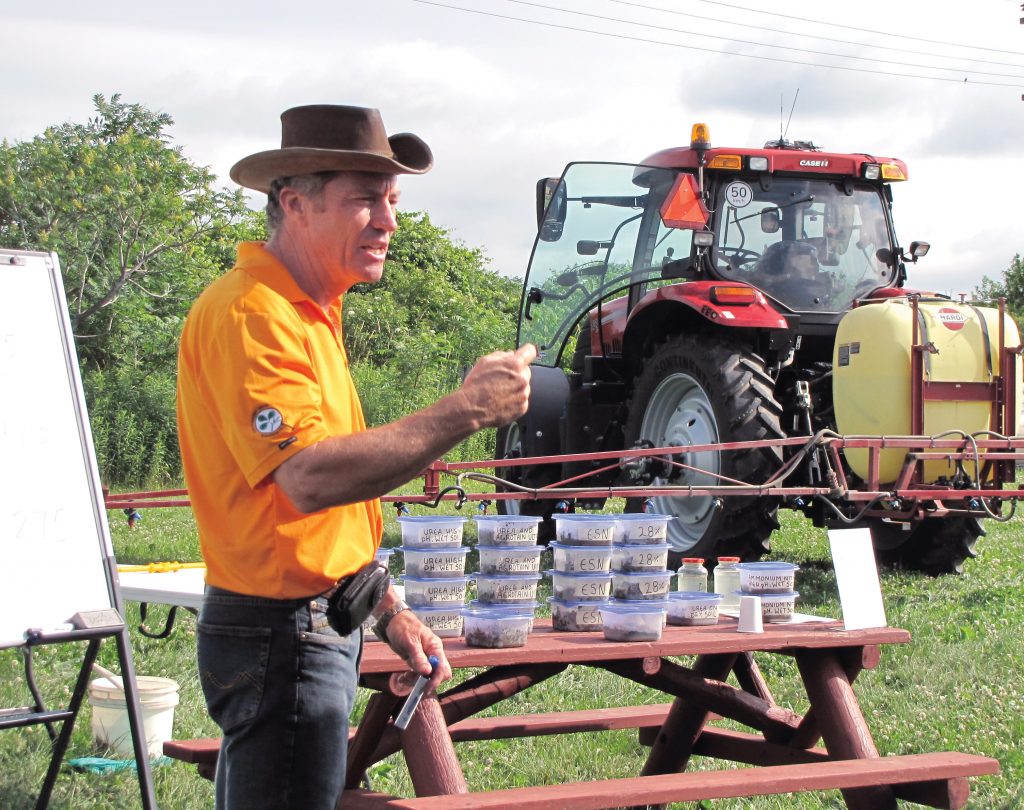