Dr. Lily Tamburic-Ilincic says the tests are not intended for growers to screen for these pathogens in their fields. Instead, the tests assist them indirectly because breeders will use them to screen for the diseases, after inoculation, and select for the resistant lines.

Winter wheat screening for FHB symptoms and deoxynivalenol (DON) levels is typically performed in Fusarium graminearum inoculated and misted nurseries. However, screening for septoria tritici blotch (STB) is performed under natural conditions without inoculation, making the selection for resistant lines more difficult. By screening breeding lines in the same nursery and inoculating for two different pathogens at different times (flag leaf for STB and anthesis for FHB), lines with resistance to both diseases might be identified sooner. As well, disease-susceptible lines will be weeded out earlier in the process.

“I developed the screening tests to use in my own breeding program. They are useful for breeders who are trying to simultaneously screen for two major diseases in order to make the best selections,” says Tamburic-Ilincic, a wheat pathologist and geneticist based in Ridgetown, Ont. “Fusarium head blight symptoms are visible on the spikes and are produced mainly by Fusarium graminearum, a pathogen that produces mycotoxins in harvested grain, which can cause health issues in humans and animals. On the other hand, septoria is a leaf disease that can negatively affect yield. Using these tests we can find the most resistant lines earlier, which we then keep in the breeding program and continue to test toward development of registered wheat varieties.”

The tests involve inoculating potential varieties in the field and then they are evaluated for the disease symptoms. She says the test for Fusarium has been available for a number of years, but the test for septoria and Fusarium in the same nursery was developed recently. She says doing the two tests simultaneously saves time because the same breeding lines or wheat varieties are inoculated and evaluated for the resistance to both diseases in the same growing season. Without the ability to screen for these pathogens, in an inoculated nursery, breeders had to evaluate if potential wheat varieties were susceptible to the disease in the field under natural conditions. This could take years of observation and would be dependent on weather conditions.

“Without screening after inoculation, we cannot be sure if the plants escaped the development of symptoms due to weather conditions or if they are resistant to the diseases,” Tamburic-Ilincic says.
Using her screening tests, Tamburic-Ilincic says she can speed up her breeding process by several years. To screen for Fusarium, she is using two approaches. One is marker-assisted selection based on DNA markers and one is evaluation of visual symptoms in the field following inoculation with the pathogen and then screening harvested grain for Fusarium damaged kernels and accumulation of deoxynivalenol (DON). She says by inoculating any potential varieties with the pathogens, she is able to identify the most promising parents for future crosses more quickly. Wheat lines identified in this nursery will be used in new crosses with the goal to develop and register new winter wheat varieties with high levels of resistance to multiple diseases, low mycotoxin levels and high yield. Other breeders benefit from her research as well because they can use the screening methodologies.

Tamburic-Ilincic also conducts regular performance trials in Ridgetown and Inwood of all wheat varieties available to growers now or in the near future. As part of her testing, she screens for yield, agronomic traits, disease, and for Fusarium after inoculation with the results for each variety published in a report. Obviously, low disease ratings, using a scale of zero to nine, are most desirable for growers. In her performance variety trials, she screens for the presence of FHB severity and incidence and DON accumulation after inoculation. All varieties included in the performance trials are rated based on an index combining FHB index and DON levels. Ratings include moderately resistant, moderately susceptible, susceptible or highly susceptible to Fusarium.

“Our information is available to farmers, which helps them make decisions on which varieties to grow. They may decide to choose to plant a variety that has higher yield and accept lower resistance to Fusarium, which, in an epidemic year, might reduce quality from food to feed wheat,” Tamburic-Ilincic says. “Alternately, they may accept some yield reduction in order to have a variety more resistance to Fusarium.”

Tamburic-Ilincic says the results of her performance trials at the Ridgetown and Inwood locations can be found at www.gocereals.ca, where growers can see how each variety stacks up in terms of yield and disease resistance. There is also an opportunity to compare varieties head-to-head on the site to
see how one variety’s resistance compares to another.

“We are trying to provide growers with good information that they can use to make management decisions,” Tamburic-Ilincic explains. She says the screening tests she developed are tools that assist her to bring new varieties to farmers and to ensure an accuracy of ratings of existing varieties.
Tamburic-Ilincic recently developed OAC Flight and Marker, soft red winter wheats. Using her screening methods she was able to ensure Marker has high Fusarium and septoria resistance compared to other varieties. OAC Flight and Marker also have the other trait that growers desire – high yield.

Going forward, Tamburic-Ilincic expects her screening tests to be used often in breeding programs and, eventually, only potential material with high resistance to Fusarium and septoria will remain in programs aimed at registration with the Canadian Food Inspection Agency. The result will be an accelerated breeding selection process and, perhaps, reduce it from the average 10 years needed to develop a new variety to a shorter time. She is adamant the tests are merely tools to make the breeding process easier because, as she says, without yield improvements, screening for disease tolerance alone is not enough. 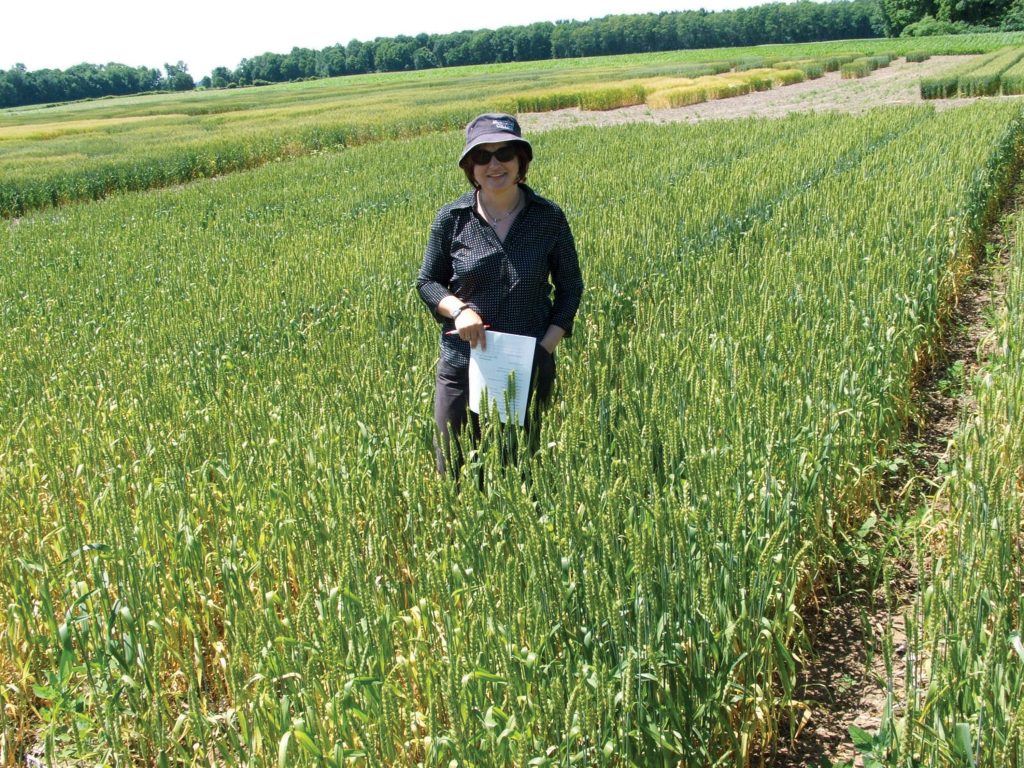