Crop pests, such as bertha armyworm and wheat midge, are on producers’ radars across the Prairies.

The PPMN reminds producers that the bertha armyworm can sometimes be confused for its doppelgänger, the clover cutworm, so producers are encouraged to review bertha armyworm information within the “Field Crop and Forage Pests and their Natural Enemies in Western Canada: Identification and management field guide.”

The PPMN compared weather data to long term normal values and found that May and June temperatures in the Saskatoon region have been one degree celsius cooler and rainfall has been 40 to 60 per cent less than normal. The recent dry conditions can have a significant impact on wheat midge emergence by delaying the movement of larvae to the soil surface.

Research models out of Agriculture and Agri-Food Canada (AAFC) Saskatoon from 2016 showed that dry conditions may result in delayed adult emergence and a reduced number of adults and eggs. 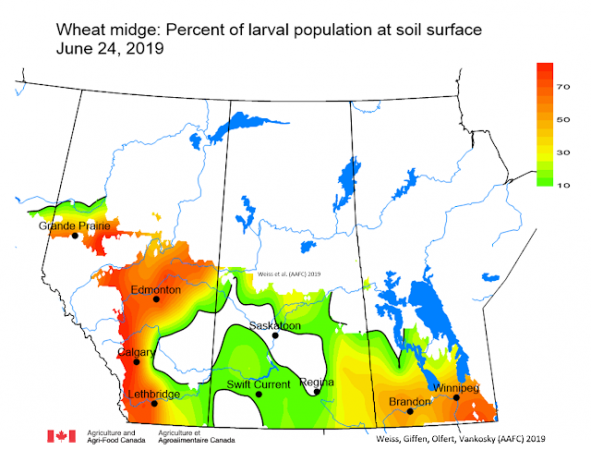 Percent of wheat midge larval population at the soil surface (as of June 24, 2019) across the Canadian Prairies. Map courtesy of AAFC.

Despite the expectation of wheat midge, the PPMN states that wheat midge populations are expected to be low across most of Alberta and Saskatchewan based off of fall surveys in 2018.