There is nothing that gets Jan Slaski gushing more than the potential of hemp as a viable alternative crop for Alberta producers.

“Hemp is a multi-purpose crop, so if you grow it for grain you are still getting fibre,” says Slaski, senior researcher with Bioresource Technologies, Alberta Innovates-Technology Futures (AITF) at Vegreville.

While hemp grain has the market pull, there are more possibilities opening up for hemp fibres. Hemp has the potential to be a dual crop (grain and fibre), but that is a decision producers need to make prior to seeding. Hemp grown for textiles needs to have long, slender stems so seeds must be sown thick and dense, and the crop harvested before the seed reaches physical maturity. However, growing hemp for biocomposites or auto parts requires shorter fibre, which needs to be harvested when the seed is physiologically matured because the fibre is coarser.

The majority of hemp currently grown in the province is in the south and predominantly for grain as that is what, at this point, brings higher market value. But there are advantages to growing hemp in the north because of the longer summer days, which allow hemp to elongate quicker, and, in turn, mature faster as the days shorten. Slaski says he is working with the Peace Country to set up demonstration plots next season as the interest in crop diversification, particularly for the biomass aspect, is high. Also of interest is whether better soil composition in the north will create higher omega-3 percentage in hemp than it does for flax.

Overall, hemp acreages are increasing in Canada primarily because producers are seeing financial return. In 2012, Alberta was second in hemp production with 5,500 hectares to Saskatchewan’s 8,800 hectares. In 2011, Alberta had the highest production at 6,500 hectares. Despite those figures, Slaski says, “Some of my colleagues say that statistically hemp does not exist in the province yet.”

Hemp’s popularity in the food and nutraceuticals markets is due to its desirable omega-3 and -6 essential fatty acid ratio, in conjunction with containing a complete protein in functional quantities that the human body can easily use.

With the three Prairie provinces accounting for over 90 per cent of hemp grown in the country, Manitoba is the current centre for processing hemp grain. Most Alberta-grown hemp is sent to Manitoba for processing and then returned to Alberta for various uses. And while Manitoba’s processing capacity has been meeting market demand, that may change, according to Kellie Jackson with ARD’s Crop Business Development Branch in Airdrie.

“Some of the larger producers are starting to look at ways to get more value. So I think the signals are coming that we may see grain processing come on line in the next year or two in Alberta,” she says. “But like anything else, it has to be a good business decision to fit into that equation before it would tip the balance to Alberta having that kind of capacity.”

Short- and long-fibre production
Hemp can grow very quickly and requires only a short growing season. “During this time hemp is capable of producing huge amounts of biomass, which yields a very usable and desirable fibre,” says Slaski. Hemp produces two types of fibre, each with a different industrial application.

The inner core fibre, also known as hurd or shiv, accounts for 70 to 75 per cent of the stalk, and Alberta’s production is being used primarily as bio building materials, poured like concrete into frames for walls. The bast fibre (long, outer fibre) accounts for the remaining 30 per cent of the hemp stalk. The longer fibres are used for biocomposites, nonwoven mats, fibreglass replacement for car parts, and plastic replacement. Through a process called scutching, hemp is made ready for the high-value textile market.

In 2009, the Alberta Biomaterial Development Centre (ABDC) commissioned several systems, including a decortication facility in Vegreville. The facility is a research and pilot plant offering a one-ton-per-hour non-continuous bast fibre (including hemp and flax) processing capacity available for industry use through fee-for-service contracts. Manitoba has a bast fibre processing plant, which mainly processes flax, and another facility in that province, near Gilbert Plains, is expected to open this year.

Hemp research in Alberta
AITF’s Vegreville research farm is one of 11 sites across Canada participating in the National Hemp Variety Trials co-ordinated by the Canadian Hemp Trade Alliance. Seven cultivars (X59, CFX-2, CRS-1, Silesia, Canada, Finola and Delores) are being tested. This is the second year of a five-year trial of a new suite of cultivars that have been bred primarily for the Prairies. While it is too soon to extrapolate any data, Slaski says last year’s results “do look promising.” He notes that the tallest plant in his breeding nursery hit 4.2 metres in height and produced a “huge volume in biomass.”

The research farm is undertaking two other trials. One is a 14-acre fibre production and testing field, to test harvest options, post-harvest retting regimes and to produce hemp stalks for testing decortication parameters. The other is the maintenance breeding nursery of the fibre-type cultivar Silesia, to which AITF owns the rights. The breeding objectives are to increase fibre yield in general and the content of bast fibre in particular, to preserve the monoecious status of the cultivar and to maintain THC below the acceptable limit of 0.3 per cent.

AITF is in the process of securing funding to set up demonstration plots in northern and southern Alberta. Slaski is excited about the possibilities of a cultivar bred for the Prairies. “Sooner than later these newly developed cultivars for Canada will take off.”

Presently the majority of hemp producers in Alberta use cultivars brought in from Finland, Poland, and Ukraine. Because they were bred for other soil and climactic conditions, these cultivars  have proven to be a challenge. Cultivars produced in southern Ontario have proved even less beneficial when tested at the AITF’s Vegreville site, by not flowering or maturing, and dying in mid-September frosts. A small number of Alberta producers are using cultivars bred in Saskatchewan. While the Saskatchewan-bred cultivars would be the optimal choice of Prairie producers, not enough cultivars have been bred for all producers to use.

“To introduce a new cultivar and to generate Certified seed material for large acreages takes time,” notes Slaski. “You start from a small volume. Hemp cultivation is limited to a certain extent to the availability of Certified seed.”

One of the more challenging aspects of growing hemp is harvesting the crop. Regular combines work for harvesting seed, but problems arise when harvesting the fibre. The stalks, which are strong and can stand three metres high, can wrap around the moving parts of the combine and start fires.

To circumvent the issue, farmers typically grow short stalk cultivars to reduce the volume of biomass passing through the combine. “This is not a practical solution, as the farmer and industry would be forgoing the potential dual income value of being able to market both the grain and straw at top value,” notes Slaski.

Lori-Jo Graham says staff at ABDC and ARD’s AgTech Centre in
Lethbridge are examining different harvesting techniques. ABDC is also investigating harvesting systems from Australia and Europe. “Our goal is to adapt machinery that is already available, not to have the farmer buy a whole suite of other equipment implements,” she says.

Future market growth
Hemp can be grown organically because the crop currently has few pathogens. Including hemp in a crop rotation can help control nematodes and improve soil texture because it has large root biomass. The crop is pest resistant and grows quickly. As well, at this point, organically grown hemp brings higher value in the food and nutraceuticals markets.

But, notes Slaski, “If producers interested in targeting the hemp fibre markets want to compete on a wider scale and produce the acreages that fibre processing plants are going to require, they’ll have to consider the use of herbicides. Work to develop minor herbicides is being undertaken in collaboration with colleagues in other provinces.”

Fulton Smyl, program manager at ABDC, believes there is the need for more widespread knowledge transfer and research on industrial hemp. This would provide industry with better agronomic and market information that could position hemp as a viable option for producers.

“I just want to temper some of the things people have been saying,” he says. “Private industry has indicated there is a potential business case for creating processing capacity in Alberta, but I don’t think it’s a foregone conclusion construction will be this year or next year.”

Developments in the U.S. benefit the Prairies
Jan Slaski, senior researcher with Bioresource Technologies, Alberta Innovates-Technology Futures, sees the return of the hemp industry in some parts of the United States as another opportunity for market growth for Prairie hemp producers.

According to the report “Hemp as an Agricultural Commodity,” which was produced by the U.S. Congressional Research Service this past July, Canada and China are major suppliers of hemp-related products to the U.S. Whereas Canada is a major supplier particularly of hemp-based foods, China has the market on hemp textiles in the U.S.

But Slaski says Canadian hemp producers have more to offer than product.

“We know how to do it. We have suitable acres. We have a 15-year advantage over our southern counterparts in production and have been an important supplier of hemp grain and fibre to the U.S. With enhanced processing capabilities it could open even more markets to Canadian hemp down south,” he says.

Production of hemp was banned on the North American continent in 1938. Canada lifted that ban in 1998. Some U.S. states have in place, or are working toward passing, legislation permitting production of hemp, although a nationwide ban remains in place. In November 2012, Colorado allowed the cultivation of small test plots; today industrial hemp is being grown in that state. Kentucky is also on its way to growing industrial hemp.
The challenges of growing and harvesting hemp and the knowledge Alberta producers have gained will prove a clear advantage over our neighbours to the south – and a clear marketing tool.

Lori-Jo Graham, development officer, Biomaterials, Bio-Industrial Opportunities Branch, with Alberta Agriculture and Rural Development, is in agreement with Slaski. “We like to say we have this window of opportunity to get commercialization happening in Alberta and then Alberta will be looked toward as a centre of excellence.”

She holds that research facilities, such as the one AITF operates in Vegreville, will be attractive to U.S. state research programs. A number of states that are presently anticipating the jump into industrial hemp production, such as Kentucky and Maryland, are undertaking pilot projects.

“I think our research facility will bring a lot of the American interest into research and development and into using Alberta skills and expertise and work that has already happened here,” says Graham. She also anticipates benefiting in collaboration with the U.S., with both Canadian and American producers growing large enough quantities of hemp to compete with the fibreglass market.

Slaski adds, “This is a time of opportunity for Alberta to secure a stronger position in the U.S. markets before the regulatory framework changes in the U.S.” 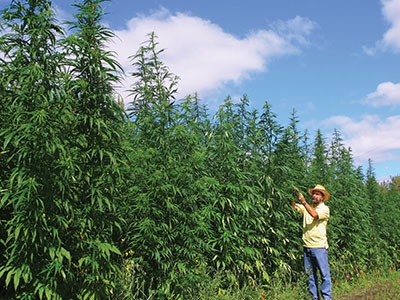 Jan Slaski There is nothing that gets Jan Slaski gushing more than the potential of hemp as a viable alternative crop for Alberta producers.
Print this page